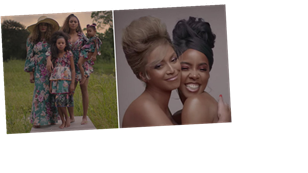 If you’ve already worn out both your Disney+ and music streaming subscription replaying Beyoncé’s award-winning ode to the beauty of Black women, you’re in luck — the singer’s finally released the music video, and it’s just as stunning as we remember. “Brown Skin Girl” originally dropped back in July 2019 along with the rest of tracks on Beyoncé’s Lion King-inspired album The Gift and, just like the other songs, it got an official music video for the artist’s visual album Black Is King. The visual album was released on Disney+ on July 31, and now all fans can happily replay it all day thanks to its YouTube release on Aug. 24.

“Brown Skin Girl” has been a particularly special release of Beyoncé, featuring Saint JHN, Wizkid, and the growing talent that is Blue Ivy Carter. A powerful love letter to the beauty of Black women, the music video’s lush visuals punctuate the song’s devotion to melanin-rich beauty, which includes Black women who are albino and darker women from South Asia. Stars like Oscar winner Lupita Nyong’o, supermodels Naomi Campbell, Adut Akech, Aweng Chuol are front and center, as well as Beyoncé’s daughters Blue and Rumi, her mother Tina Knowles-Lawson, and her best friend and former Destiny’s Child bandmate Kelly Rowland. If the lyrics don’t have you tearing up, the obvious love among all participants definitely will! Watch the music video above.