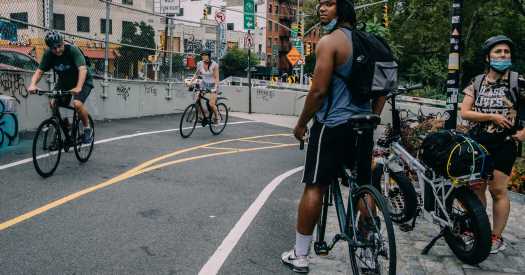 One of the more unexpected side effects of the pandemic has been a surge in cycling, fueled by people avoiding trains and buses and seeking a way to stay in shape. That triggered an extreme shortage of bicycles. Then came the thieves.

Bikes are being plundered from sidewalks, garages and apartment building basements in rising numbers in New York and across the country. Similar spikes in thefts have also been recorded abroad, including in Britain and France.

No one, it seems, is immune.

A father recently posted a sign on a Brooklyn street to publicly shame the thief who stole the bike his 10-year-old son got for his birthday. A bike along with the railing it was locked to were stolen from a Brooklyn apartment building. In the Bronx, a 15-year-old boy riding a bike was attacked by eight men who stole his cycle.

“When you buy a bike you just hope that you hold onto it for as long as you can,” said Jacob Priley, 29, explaining how he had two bikes stolen, one after the other. 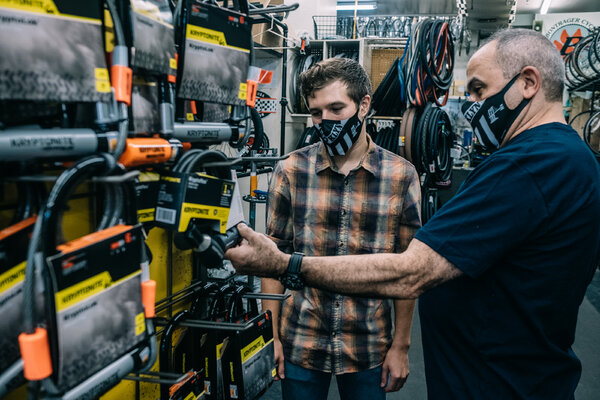 The first was at a protest against police brutality in Brooklyn where he said he was arrested after being out past a curfew and left his bike on the street. He replaced it with an electric mountain bike costing about $800. That one was stolen, too, after he left it overnight in the street, albeit locked.

While locks are obviously a good idea, many are no match for the electric saws that thieves commonly use.

“Every lock — you can break it,’’ said Sty Gonzalez, who works at Trek Bicycle shop in Manhattan. “The stronger ones just buy you more time.”

Before the pandemic, Joe Nocella, who owns 718 Cyclery in Brooklyn, used to hear about someone getting their bike stolen maybe once a week. Now it’s every day.

“If they leave their bikes out, they have to be emotionally and financially prepared for it to not be there the next day,” Mr. Nocella said. “The best thing is to keep it with you everywhere you go. Sleep with it next to you.”

The number of bicycles, including those with electric motors, reported stolen in New York from March through Sept. 21 was 4,477, an increase of 27 percent from the 3,507 reported stolen during the same period last year, according to the police.

Those figures are likely an undercount since only one in five bike thefts are reported to the police, according to 529 Garage, a bike registry service. About 1.7 million bikes are stolen every year in the United States, about one every 30 seconds, according to the group.

Bike Index, another national bike registry group, said that between April and September, the number of bikes reported stolen to the service totaled 10,059, compared with 5,998 during the same period last year, a rise of 68 percent.

Bike theft is nothing new, but the latest surge seems to be driven, at least in part, by the shortage caused by a disruption to global supply chains during the outbreak.

Between April and July, sales of bicycles in the United States rose 81 percent compared with the same period last year, according to the NPD Group, a market research company.

“We tend to have seasons like ‘garage break-in season,’ or ‘theft-from-the-street season,’ but now it’s all seasons at once,” said Bryan Hance, a co-founder of Bike Index.

The handling of bike theft differs among police forces, so it can be hard to get a precise handle on the scope of the problem in different cities. Several police departments were unable to provide data. Some agencies will not accept theft reports without a serial number, which not every owner records.

The police force in Portland, Ore., is one of the few agencies in the country to have a dedicated bike theft unit. It reported an 18 percent increase in stolen cycles between January and August compared with the same period last year.

The chances of recovering a stolen bike are often slim. Thieves can easily and quickly sell pilfered bikes on apps and will often sell bikes to buyers in different cities or states, to lessen the chance of being caught, according to bicycling groups.

Velosurance, a company that provides customized insurance for bicycles in many states, said it had its largest monthly sign-up of new customers in August.

“Everyone thinks that bikes are covered somehow by some other policy,” said Dave Williams, chief executive of Velosurance. “Unfortunately, it often takes a claim to find out how badly high-value bikes are insured.” One customer who had a $2,000 bike stolen from his garage recently, Mr. Williams said, only received $183 after filing a claim with his insurance company.

Bikes are also being stolen in growing numbers outside the United States.

In Paris, bike theft surged by 62 percent from the beginning of this year through September compared with the same period last year, according to local news reports. Cyclists have been urged by officials to find a bush to hide their bikes in.

In London, bike theft fell when Britain went into lockdown but surged when it eased. Between June and August, Metropolitan Police recorded 8,453 thefts, compared with 6,422 in the same period last year, a rise of about 30 percent. In August, the police arrested two men after discovering nearly 120 stolen bikes at a home in East London.

In the United States, Craigslist and Facebook Marketplace, as well as apps like OfferUp, are filled with gleaming mountain bikes selling for $200, a suspiciously low price suggesting the bikes may have been stolen.

Part of the problem, especially in New York, cyclists say, is a lack of secure indoor places to park, even though the city anticipates more bike commuting in the months ahead and officials are building out the city’s network of bike lanes.

“We’re in this Wild West,” said Mr. Priley, who had two bikes stolen. “I just have to hope that the bike locks I bought are good enough to deter someone long enough until someone else comes by and says go away.”

Shabazz Stuart, co-founder of Oonee, a company that designs parking pods for bikes, said two of the pods were being used in New York, one of them large enough to accommodate up to 20 bikes. The pods are free for bikers to use.

City officials, Mr. Stuart said, needed to add many more secure parking shelters, especially in poorer neighborhoods where it might be more difficult for cyclists to replace a stolen bike.

“We have to treat it like we treat public transit,” he said. “If we have 3,000 bus shelters in New York City, why can’t we have 1,000 bike stations and why can’t you finance it through advertising and media, like we finance bus shelters and newsstands?”

The city’s Department of Transportation declined to discuss any additional measures to protect bikes from thieves and referred questions to the Police Department. Officials there simply underscored the importance of locking bikes in public.

In the meantime, victims are making do — and making peace — with their experience.

Guillermo Ortas, 27, a Brooklyn resident who had his $800 bike stolen — along with the railing to which it was attached in the basement of his Bushwick apartment building — took a more philosophical view.

“In the end, we live in a pretty crazy world, so I can’t really focus on negative energy,” he said.

Alice Culpepper, who lives on the Upper East Side of Manhattan, had a $500 turquoise hybrid stolen recently. She bought a new, more expensive bike that she parks at the foot of her bed.

“There’s no way I’m parking this bike outside ever again,” she said. “I’m just too paranoid and that’s no fun, but that’s how it is.”