In the decades before the Stonewall uprising in 1969, an L.G.B.T.Q. community took shape among New Yorkers on a remote Fire Island hamlet known as Cherry Grove.

There, visitors spent summer weekends sunbathing and partying, forming one of the country’s first gay beach towns when being openly gay could result in ostracism or imprisonment. Only in 1980 did New York State eliminate most of its laws against sodomy.

A new outdoor exhibition in the courtyard of the New-York Historical Society, on view through Oct. 11, features dozens of enlarged photographs that document this history, illustrating how the hamlet allowed visitors “to become their real selves, rather than who they thought they were supposed to be,” according to Susan Kravitz, one of the curators. The images in “Safe/Haven: Gay Life in 1950s Cherry Grove” come from the Cherry Grove Archives Collection, a volunteer organization formed in 2011, about 40 years after the community archivist Harold Seeley began assembling records. 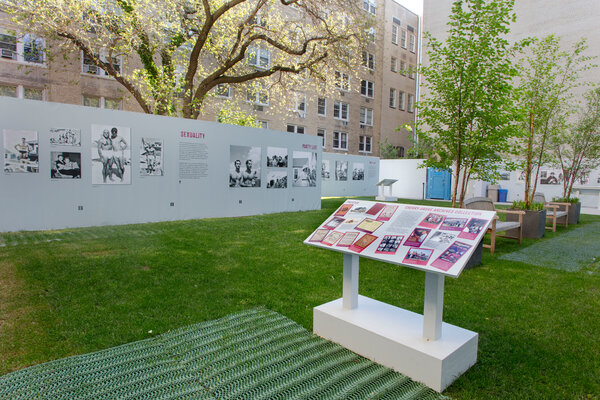 Some of the photographs show the quotidian ease and enjoyment that came with expressing outlawed sexuality in a safe space: In one, a pair of men kiss at a house party; in another, two women sit close together on the beach. Other images capture moments from campy costume parties and theatrical performances. Many of the photos were found in the trash after residents died and their homes were emptied.

Residents of Cherry Grove weren’t immune from police raids and assaults from drunken visitors. Still, gay men and lesbians flocked there each summer, including the photographer Richard Avedon and the writers Tennessee Williams, Patricia Highsmith and Truman Capote.

While the photographers behind the images remain mostly unknown, many were likely the gay white men who first began to infiltrate the island in the late 1940s and 1950s, followed by lesbians. The images themselves, then, represent an enduring act of resistance, likely recorded by those who shaped this little-known history.

Ms. Kravitz, who has been visiting the Grove for 40 years, counts herself among the photographers. Two of her images show how, following the civil rights movement, Cherry Grove became more welcoming to Black people and Latinas from the L.G.B.T.Q. community.

That acceptance — and the joy characteristic of the place — foretold the flourishing of gay and lesbian life in New York City and beyond, she said.

“The seeds were planted in Cherry Grove.”