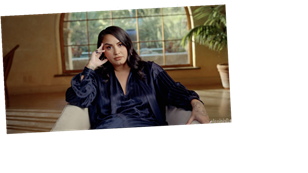 If there’s one thing we can count on from Demi Lovato, it’s a realness that is almost painful in its truth. Two years after she was hospitalized for a drug overdose, the “Commander in Chief” singer is giving the world a visceral look back at the most trying time of her life with a new docuseries titled, Dancing With the Devil.

The four-part documentary series will explore every aspect that led to her near-fatal overdose in 2018 and the life-shaking journey in the aftermath, with commentary from her close friends and family, including her mother and sisters. Lovato worked with director Michael D. Ratner, giving him unprecedented access to her personal and musical journey as she unearthed her trauma and rediscovered the importance of her physical, emotional, and mental health. The film follows Lovato from her 2018 Tell Me You Love Me world tour to the present day, including her memorable Grammy’s performance, musical drops, and tumultuous love life. The people closest to her recount the nerve-racking period before her overdose, highlighting the pressure to be an “icon” and Lovato’s ability to “make you believe that she’s okay,” as the singer reveals how she “snapped” and the road to healing and empowerment that followed.

“Anytime that you suppress a part of yourself, it’s going to overflow,” Lovato says in the emotional trailer. “I snapped. I had three strokes. I had a heart attack. My doctors said that I had five to ten more minutes.”

The first two episodes of the docuseries will premiere on YouTube for free on Tuesday, March 23, with new episodes released weekly on the next two Tuesdays.