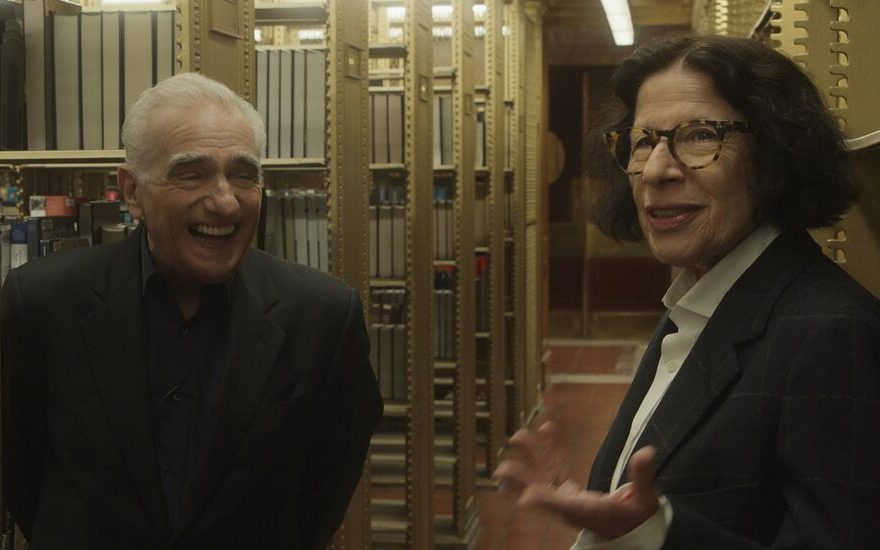 Had this past New Year’s Eve been a normal one, Fran Lebowitz and Martin Scorsese would have spent it as they usually do: with each other and a few close friends, in the screening room in Scorsese’s office, watching a classic movie like “Vertigo” or “A Matter of Life and Death.”

The year they got together to see “Barry Lyndon,” they watched a rare, high-quality print made from the director Stanley Kubrick’s original camera negative.

“And I said, ‘What’s a camera negative?’” Lebowitz recalled in a group video call with Scorsese on Tuesday. “And then all of the movie lunatics glared at me, like I admitted to being illiterate.”

In previous years, when they were feeling especially energetic, Scorsese said with some audible melancholy, “We used to have one screening before midnight and then have another screening after.”

But this time, their annual custom had to be put on hold. Instead, Lebowitz explained: “I talked to Marty on the phone. We commiserated about how horrible we felt, how awful it was not to be doing that.”

Lebowitz, the author, humorist and raconteur, and Scorsese, the Academy Award-winning filmmaker, were speaking from their individual New York homes to discuss their latest collaboration, the documentary series “Pretend It’s a City.” They are longtime friends who, as they continue to wait out the coronavirus pandemic, have lately been unable to see much of each other or the city with which they are irrevocably associated.

A similar, bittersweet air hangs over the seven-part series, which Netflix will release on Friday. A follow-up to Scorsese’s 2010 nonfiction film “Public Speaking,” “Pretend It’s a City” (which Scorsese also directed) chronicles the acerbic Lebowitz in interviews, live appearances and strolls through New York as she shares stories about her life and insights about the city’s constant evolution in recent decades.

Of course, the Netflix series was initiated before the pandemic, and Lebowitz and Scorsese are supremely aware that it depicts a bustling, energized New York that now feels just out of reach — and which they both hope will return soon.

In the meantime, “Pretend It’s a City” offers a tantalizing snapshot of New York in full bloom, along with Lebowitz’s lively and unapologetic commentary on what it means to live there.

As she explained: I don’t care whether people agree with me or not. My feeling if someone doesn’t agree with me is, OK, you’re wrong. That is one thing that I’ve never worried about.”

Scorsese gently replied, “I had that impression.”

Lebowitz and Scorsese spoke further about the making of “Pretend It’s a City” and the impact that the pandemic has had on them. These are edited excerpts from that conversation. 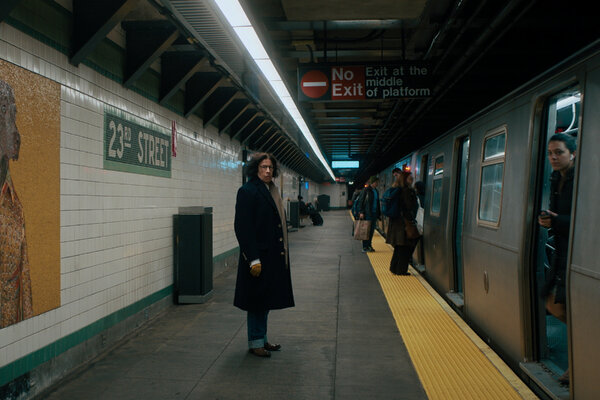 I was surprised to learn from “Pretend It’s a City” that neither of you recall when you first met.

FRAN LEBOWITZ That’s because we’re old and we have many friendships. I don’t mean old in the sense that we don’t remember things, because I believe we both have perfect memories. But because there’s so many years and so many people. I guess we met at a party, because where else would I have met him? Obviously, I go to a lot more parties than Marty. That’s why Marty made so many movies and Fran wrote so few books.

MARTIN SCORSESE I really recall us talking the most at John Waters’s 50th birthday party. It was after “Casino” came out.

LEBOWITZ Of course, you were not adverse to hearing how much I loved it.

SCORSESE No, I was not at all.

LEBOWITZ Even though I’m not as Italian as you might imagine [laughs], Marty’s parents and a lot of my father’s relatives — all of whom were working-class Jews — have a lot of parallels that are very well-known. The big difference is, the food is better in Italians’ houses.

LEBOWITZ No, no, no, there’s no comparison.

After working together on “Public Speaking,” what made you want to collaborate on another documentary project?

SCORSESE I enjoyed making “Public Speaking.” I found it freeing, in terms of narrative. But primarily, it’s about being around Fran. I really would like to know what she thinks, pretty much every day, as it’s happening. I’d like a running commentary — not all the time, but one that I can dip in and out of during the day.

Do either of you worry that Fran is a finite resource and you will eventually exhaust her supply of wit?

The series is divided into fanciful chapters like “Cultural Affairs” and “Department of Sports & Health.” How did you settle on these subjects?

SCORSESE We always felt we should have topics. She’ll start on a topic, and then it’ll go off like a jazz riff into a thousand other places. Eventually, we might be able to pull it back. In a lot of the films I make, the types of actors I work with, the dialogue is like music — it’s the timing and the emphasis. She has that.

LEBOWITZ Of course I am the world’s most digressive speaker, but what you’re really seeing at work is editing. I don’t remember how many days we shot this but I’m confident that it was an infinitesimal amount compared to how much time it took him to edit.

SCORSESE I try to get that kind of freedom in my narrative films, but I very often am stuck to a plot.

LEBOWITZ I am plot-free, so no problem. [Laughter.]

Among the locations where you filmed Fran is at the Queens Museum, where we see her standing amid the Panorama of the City of New York, a highly detailed scale model that Robert Moses had built for the 1964 World’s Fair. What was it like to shoot there?

LEBOWITZ I did knock over the Queensboro Bridge. The guy who’s in charge of that, the day we shot there, was in a panic the entire time. And I proved him right.

SCORSESE That was the only time that I ever yelled “Action!” I don’t know what possessed me. It must have thrown you off or something.

LEBOWITZ I did not destroy it, I just knocked it over.

SCORSESE By the way, it is magnificent, that model.

LEBOWITZ I’m not sure it makes up for Robert Moses. [Laughter.] It made you realize that if only Robert Moses had done everything in miniature, we wouldn’t hate Robert Moses.

How did the pandemic affect the making of this series?

LEBOWITZ We shot it way before there was a virus. When the virus happened, Marty said, “What should we do? What can we do?” At the height of the shutdown, I went out walking around the city, and Marty sent Ellen Kuras [the director of photography on “Pretend It’s a City”], and what she filmed was incredibly beautiful. But I said to Marty, “I think we should ignore it.”

SCORSESE We tried it. We edited sequences. It was OK, and then a week later, the city changed again. All these stores were closed and they had boards up. A week later, something else changed. So I said, “Let’s just stop it."

LEBOWITZ We’re not journalists. We don’t have to be on top of the news.

Does the series feel different to you because of the pandemic?

LEBOWITZ There’s a difference for sure. I thought of the title, “Pretend It’s a City,” when New York was packed with morons who would stand in the middle of the sidewalk. And I would yell at them: “Move! Pretend it’s a city!” The people who have seen it since then — an agent of mine said, “Oh, it’s a love letter to New York.” Before the virus, it was me complaining about New York. Now people think it has some more lyrical, metaphorical meaning.

Do you worry that New York won’t fully return to what it was before the pandemic?

LEBOWITZ I have lived in New York long enough to know that it will not stay the way it is now. There is not a square foot of New York City, a square foot, that’s the same as it was when I came here in 1970. That’s what a city is, even without a plague. But I’d like to point out, there were many things wrong with it before. After the big protests in SoHo, I saw a reporter interviewing a woman who was a manager of one of the fancy stores there. The reporter said to her, “What are you going to do?” And she said, “There’s nothing we can do until the tourists come back.” I yelled at the TV and I said, “Really? You can’t think what to do with SoHo without tourists? I can! Let me give you some ideas.” Because I remember it without tourists. How about, artists could live there? How about, let’s not have rent that’s $190,000 a month? How about that? Let’s try that.

Has the pandemic ever made you feel more vulnerable or aware of your own fragility?

SCORSESE I actually don’t know where I belong on the island. I grew up downtown when it was pretty tough in that area. Now it’s very chic. It’s no longer home for me, certainly. I’ve grown old, and out, in a way. I have been locked in and working on FaceTime. I have been trying to make this movie [“Killers of the Flower Moon”] since March. Every two days, they say we’re going. And then they say, no we’re not. It’s a state of anxiety and tension. But in any event, I really haven’t gone out that much. I can’t take a chance, either.

The day the pandemic is over — there’s no longer any risk of the coronavirus and we can all return to our usual lives — what’s the first thing you do?

SCORSESE First thing I would say is, please, to go to a restaurant. There’s a few that I’m missing a great deal. I’ll never eat outside. I don’t understand how you can sit there and the fumes from the buses come in. I don’t get it. It’s not Paris.

LEBOWITZ I’ve been eating outside. There is no greater testament to how much I hate to cook than the fact I will sit outside in 28-degree weather, trying to eat with gloves on. I would like to eat at a restaurant. Also, I would like to crawl around underneath the tables in the rare book room at the Strand and when I bring the things to the register and the guy goes, “Where did you find this?” It was under the table. “We haven’t priced it yet! You’re not supposed to take it out from under there.” Well, I did, so how much is it?