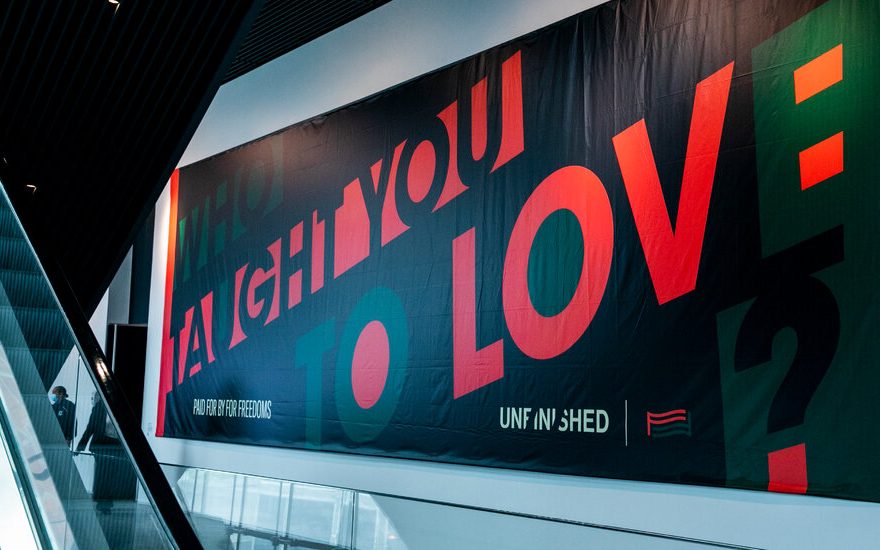 The colossal white tent on Randalls Island — the one that occasionally threatened to uplift and blow away — is gone, along with the frenetic ferry rides up and down the East River. But Frieze is back, the first live art fair returning to New York after more than a year.

This year’s edition, taking place Wednesday to Sunday, is inside the Shed, the performing arts center on the Far West Side at Hudson Yards. It includes only 64 commercial galleries — as opposed to nearly 200 in 2019 — though some international exhibitors from Buenos Aires, Brazil and London are represented. But there is plenty of work worth seeing, spread over more than three double-height levels. All necessary health precautions are being observed, but unless you’ve made prior arrangements, you may not be able to attend in person: Tickets are already sold out. What remains is a waiting list and an extensive virtual Viewing Room with more than 160 international galleries, which you can visit free through May 14. 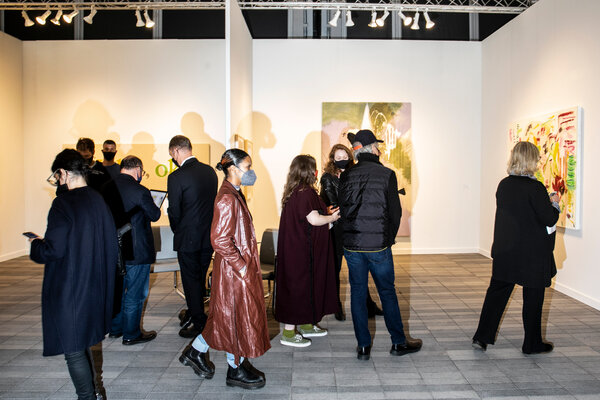 The displays on the whole are a little conservative, which is understandable enough in an uncertain moment. Many galleries are showing painting, the easiest medium to sell — or mounting dutiful roll calls of their artists. But the Shed, often criticized for its blandness, serves as a surprisingly suitable convention center, and there are gems among the cautious displays.

Founded in 1969 by the artists AA Bronson, Felix Partz and Jorge Zontal, the collective General Idea made heady but playful work that dealt with sex, art, money, and the AIDS crisis. This solo presentation offers a scattershot but substantive introduction to the group’s oeuvre. Their signature poodles appear both in cheerfully self-aware drawings with mounds of pasta-like curls and on canvas in a discreet ménage-à-trois. (Will Heinrich)

Cohan recently mounted a stellar show of Trenton Doyle Hancock’s paintings and graphic-novel-style drawings in its two downtown galleries. Now Hancock takes over the booth in the Shed with a series of black and white paintings and collages that include hooded figures reminiscent of those in Philip Guston’s controversial Ku Klux Klan paintings from the 1960s and ’70s. These works set up an interesting conversation about race and imagery, from Hancock’s Black superheroes to Guston’s self-reflexive, self-effacing self-portraits. (Martha Schwendener)

To make his “cut paintings,” the French conceptualist Daniel Buren sliced large rectangles of striped cotton cloth into pieces, which he then pinned up at the edges of a wall. It’s a masterly way to reclaim an entire room and transform boring white house paint into art. Three pieces, from 1976 to 1980, make this booth an elegant oasis from the sensory overload that attends even this year’s smaller fair. That is, until you realize that Buren’s red and blue stripes are a kind of sensory overload of their own. (W.H.)

In 2017, Dana Schutz was widely criticized for her painting of Emmett Till in that year’s Whitney Biennial. Since then, her work has gotten heavier and darker. The large paintings in this solo presentation — easily the fair’s standout — are full of fresh bloody reds, toxic greens, and visibly frantic brushwork. Figures trudge up hills enacting scenes of medieval penance; in “The Ventriloquist” (2021), a screaming female doll is surrounded by clouds of hellfire while her reptilian operator drinks a glass of water. Three somberly colored bronze casts offer a beautiful counterweight. (W.H.)

The London gallery Stephen Friedman is showing the paintings of Sarah Ball, in which she explores gender and nonbinary people. The portraits have an anodyne, airbrushed look, which gives them an eerie appearance — but also makes them resemble portraiture from earlier eras, or folk painting in which gender was less defined. Cropped compositions and emphasis on the subjects’ eyes adds to the uncanny nature of Ball’s paintings. (M.S.)

Tribute to the Vision & Justice Project

Throughout the fair are objects that pay tribute to the Vision & Justice Project, which explores the role of race and citizenship in the United States, and to its founder, Sarah Elizabeth Lewis, an associate professor at Harvard. Carrie Mae Weems contributes a massive vinyl wall work featuring photographs of book covers of artists and scholars who were part of the Project. Mel Chin’s vinyl billboard pays tribute to Black Lives Matter and A.A.P.I. (Asian-Americans and Pacific Islanders), and Hank Willis Thomas recreates a work from the artist-led For Freedoms billboard project he founded with Eric Gottesman. (M.S.)

This fine three-artist installation boasts the brightest colors in the building, though its exuberance does feel a little calculated. Katherine Bernhardt’s delightful graffiti-like paintings — showing a boombox-laden E.T. flipping the bird, and the Pink Panther on an “I Love NY” logo — meet their match in hip sculpture by Luke Murphy and fearless mixed media wall pieces by Rachel Eulena Williams. (W.H.)

The Bogotá gallery Instituto de Visión is showing the wry, funny and playful works of the Colombian artist, Wilson Díaz. A wall of record albums — some painted, some actual record sleeves — gets at the heart of his practice, which questions the real and the fake in mass media, politics and Colombian culture. A lighted sign on the wall reads “Movement of the Liberation of the Coca Plant,” as if the plant itself could stop the geopolitical turmoil. Next to this work is a goofy painting of a banana slipping on a banana peel, as if answering the futile question of how tropical plants can stop tripping up humanity. (M.S.)

Frieze Week was especially busy for the local gallery Microscope, specializing in moving images and sound art, which moved its location from Bushwick to Chelsea. The presentation here features Ina Archer’s “Lincoln Film Conspiracy Project” (2005-2021), a series of videos, watercolors and collages that explore the Lincoln Motion Picture Company (1916-23). Considered the first African-American motion picture production company, its films have virtually disappeared. In her work, Archer, a filmmaker and artist, creates fictional movie posters and promotional materials — often starring herself or family members. Accompanying watercolors explore negative representations of African-Americans, like the racist “golly dolls” of the late 19th-century. (M.S.)

The London-based artist Zeinab Saleh makes dreamy, loosely structured drawings and paintings based on VHS home videos. In one, a round form on a pedestal might be a cake or a lavish round bed; in another, a ghostly snake slithers toward a woman’s face in a hand mirror. What’s most striking is the work’s moody range of colors, from the cloying blue of cigarette smoke to smoggy green. (W.H.)

Using found materials in carefully chosen hues, the Ukrainian-American artist Olga Balema makes sculptures that evade interpretation. Folded mylar could be mistaken for discarded packaging, even garbage, while a tall object shaped like a haunch of venison is wrapped in blue latex. What’s inside? You’ll never know. (W.H.)

The artworld fascination with cryptocurrency and NFTs (nonfungible tokens) has largely bypassed Frieze, but the Buenos Aires gallery Barro obliquely addresses these phenomenon. Agustina Woodgate’s project “Don’t Trust. Verify” (2021), which takes its name from the cryptocurrency slogan for assuming anyone can be a threat to your immaterial hoard. Woodgate has brought in an A.T.M., renamed an “ADM” (Automatic Dealer Machine). Insert your debit card and for $100 you get an artistically augmented dollar bill (portraits and landscapes sanded off). The gallery describes the project as an attempt to “deconstruct money as a representational medium” (a nice way of skirting the fact that you’re not supposed to deface U.S. currency). (M.S.)

Otis Houston Jr., a self-taught artist who also goes by the name Black Cherokee, is in his late 60s, lives in East Harlem, and spends hours every week displaying art and performing under the Robert F. Kennedy Bridge, still popularly known as the Triborough. A few simple assemblages and spare, peculiar drawings have a vibrant immediacy, but it’s Houston’s text art that’s really transfixing. “If you can’t be the cow’s head,” he advises in spray paint on a towel, “don’t be his tail. Be the bell that rings around his neck.” (W.H.)

I never tire of Karen Kilimnik’s visionary imagery. The world, after all, is rather confusing, and Kilimnik treats it with the wide-eyed wonder of a child drawing kittens, horses and princesses with earnest adoration. Those figures are here in 35 years’ worth of paintings and pastel drawings mounted on wallpaper. The presentation blurs irony with a love of kitsch and frilly Rococo decorations. That approach, in itself, remains nonchalantly defiant and radical. (M.S.)

The three nonprofits sharing this booth offer prints and editions even civilians can afford. Printed Matter’s presentation includes its first-ever video edition, by the artist Coco Fusco, while Skowhegan, the influential school of painting and sculpture in the wilds of Maine, has Christina Quarles’s irresistible print “Magic Hour,” in which a pair of entranced lovers, bruised with fluorescent color, embrace in a squiggly green sea. (W.H.)

Originally based in São Paulo, Mendes Wood now has outposts in New York and Brussels. Their presentation at the Shed includes Brazilian art stars like Rubem Valentim, represented by a geometrically abstract painted composition from 1962, and Paulo Nazareth, whose sculptures of radical historical figures graced Rockefeller Center in the 2019 Frieze program. But Mendes Wood also has some other curiously weird works, like a 2017 Lynda Benglis sculpture created with handmade paper over chicken wire, decorated with sparkles, and Solange Pessoa’s floor sculptures, which look like fossils of giant snails or spiraling plants. (M.S.)

Frieze New York at the Shed