When fans see George and Amal Clooney looking glamorous, happy, and so-in-love on the red carpet, it’s not an act. The genetically blessed couple, who celebrated their eighth wedding anniversary on Tuesday, revealed that their relationship is as perfect as it looks — and we are jealous!

Telling Gayle King on CBS Mornings that they’ve “never had an argument,” George let everyone in on their magical formula. “It does start with love,” he explained. “That’s sort of the whole secret to it. It’s just been easy. Like the easiest thing we have done in our lives thus far. Amal noted that “it’s madness to some of our friends,” so we are glad we aren’t the only ones who are baffled by how simple they make it sound. However, the human rights lawyer chalked it up to “99 percent luck just to meet the right person.”

Well, it was love-at-first sight for the 61-year-old actor, and who could blame him? “The minute she walked in the door, I was just taken by her,” he admitted. “And the fun part was, I didn’t know whether she would like me or any of those things. And then she’s this extraordinarily fun, smart, beautiful, great woman and I was just very taken with her, and I started writing her letters.” Yes, good, old-fashioned letters to woo a very accomplished woman, who has a huge career in her own right.

Amal revealed that falling in love with George took her “by surprise,” but she was soon just as smitten as the Ticket to Paradise star. So the next time you think that there’s no way George and Amal can have it all, they’ve already confirmed their marriage is the romance of their dreams.

Before you go, click here to see the longest celebrity marriages. 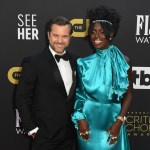