In New York, trick-or-treating has been curtailed, and parades called off. But there are plenty of ways to please and spook the little ones. 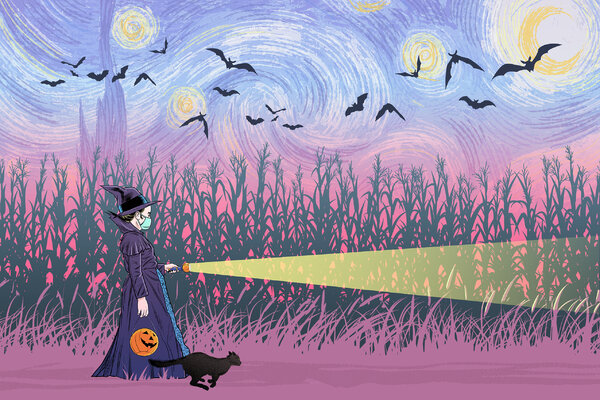 If you have children, then Halloween will see a lot more trick than treat this year. Here in New York, cruising neighborhoods for candy has been discouraged, parades are canceled and bobbing for apples is the kind of innocent party game that makes virologists cry. It might seem that not even a pillowcase full of mini Kit Kats can improve the situation.

Luckily, there are still ways for families to celebrate — some comforting, some terrifying, some in person, some virtually. If you’re in search of ghoulies, ghosties, long-leggedy beasties or milder jack-o-lantern-lit diversions, start the season here.

By day, the Queens County Farm Museum has chickens, goats, historic farm buildings and impressive displays of urban horticulture, plus a killer apple cider doughnut stand. It has these things by night, too. It also has the Maze by Moonlight, an opportunity to navigate its three-acre Amazing Maize Maze, a labyrinth of corn stalks, in near darkness. Bring your own flashlight and enter with a timed ticket and lots of hand sanitizer to hunt for clues, piece together a map and discover a timely means of escape. This year’s maze is inspired by van Gogh’s “Sunflowers,” so solving it on a starry night should feel extremely on brand. 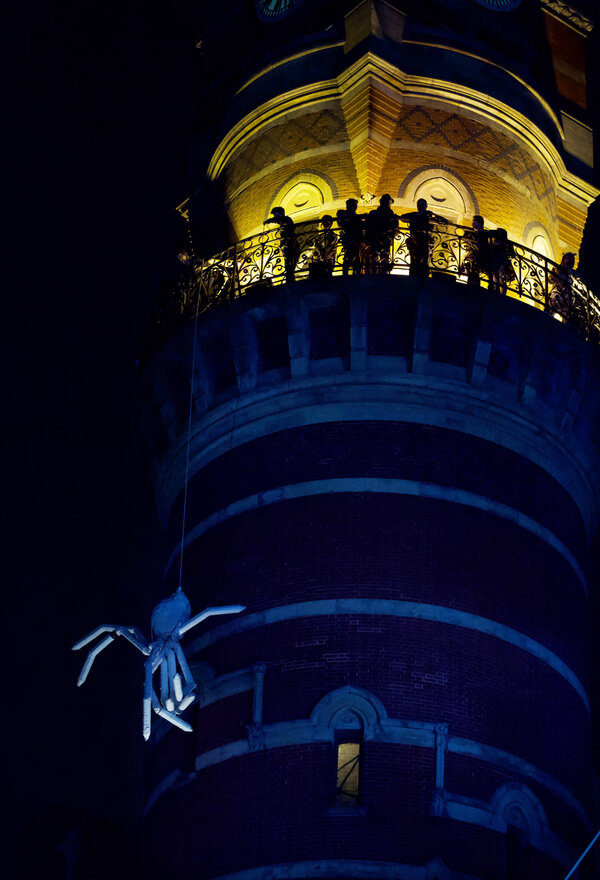 The parade passes by, online

The Village Halloween Parade has canceled its annual march, and the Village Halloween Costume Ball, hosted by Theater for the New City, has suspended in-person events. But a bohemian approach to the holidays persists. The puppeteer Basil Twist will still unleash his spider, a creepy-crawly parade staple, from the Jefferson Market Library tower. And over in the East Village, virtually, downtown legends like Everett Quinton, Austin Pendleton and Penny Arcade will make appearances. Other scheduled activities include a scream contest, a Tik-Tok-style costume contest, a short-play festival and a kid’s corner.

Do the Monster Mash on your living room carpet

Children’s troubadour Laurie Berkner will host two Halloween family concerts. At each performance, Berkner will lead kids in a holiday-themed singalong. Wear a costume — these concerts are interactive, and Berkner can see you, too. Similarly, Latin Grammy-winner Mister G and the Global Citizen Ensemble will also host a Zoom concert, dropping in on families in America and Mexico to introduce children to Day of the Dead celebrations. A free ticket to the concert also comes with a download code for the “Children of the World” album and an activity book.

Maybe you can’t take your drama-club teen to the theater right now, but you can try these film chillers, each adapted from a hit Broadway play. Start with “Deathtrap” (available for online rental), Sidney Lumet’s adaptation of Ira Levin’s horror comedy, with Michael Caine and Christopher Reeve as dastardly playwrights. Move on to “Rope” (Peacock) a claustrophobic Patrick Hamilton drama about the thrill killers Leopold and Loeb, directed by Alfred Hitchcock. Then finish with “Wait Until Dark” (available for online rental), Terence Young’s adaptation of a Frederick Knott play, starring Audrey Hepburn as a blind woman menaced by Alan Arkin. Can’t sleep? Stay up with “Night Must Fall” (Amazon Prime Video) an Emlyn Williams play directed by Robert Thorpe, and live in fear of hat boxes forever.

Take history-minded children and those interested in other cultures to Green-Wood Cemetery, which is hosting a Día de los Muertos event. Visitors are encouraged to bring offerings for the dead and place them on an altar designed by the artist Scherezade García. While you’re there you can also visit the graves of some of the famous departed such as Jean-Michel Basquiat, Leonard Bernstein and Susan McKinney Steward. For a creepier approach to New York’s past residents, try a walking tour with N.Y.C. Ghosts. Stops include the Jefferson Market Library, a former women’s prison and the site of the Triangle shirtwaist factory fire.

Animals, it turns out, enjoy tricks and treats as much as the rest of us. Maybe more. Have you seen a piglet attack a pumpkin? It is a magnificent sight. The Bronx Zoo and Brooklyn’s Prospect Park Zoo each have their own scheduled activities. Some highlights: a candy trail, a scavenger hunt, pumpkin carving demonstrations, a masked magic and mind reading show and, less delightfully, a graveyard commemorating extinct animals. (Because what’s scarier than species die-off.) At the Bronx Zoo, children who come in costume receive 50 percent off timed tickets.

Spook the kids, just a little

Some kids — and plenty of grown-ups — don’t like scary movies. But there are plenty of Halloween-themed films that won’t give anyone nightmares. For a holiday classic, consider “It’s the Great Pumpkin, Charlie Brown” (Apple TV+), a paean to sincerity and gourds. The “Hotel Transylvania” (Amazon Prime) movies make monsters less monstrous, as does “Monsters, Inc.” (Disney+). If you’re confident that bunnies won’t panic the children, there’s “Wallace & Gromit: The Curse of the Were-Rabbit,” (available for online rental) a triumph of stop-motion glee. And if even a were-bunny is too much scare, there’s “Kiki’s Delivery Service” (HBO Max), a gentle, enchanting film about a little witch who learns to believe in herself.