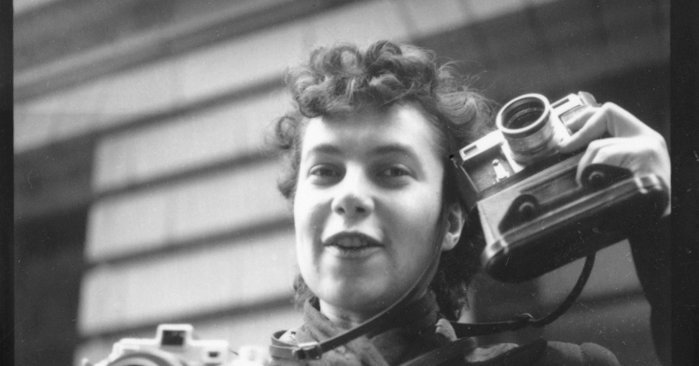 Ida Wyman, a photographer who in the 1940s and ’50s roamed New York and other cities to capture compelling images of everyday people working, playing, idling, dancing or selling newspapers, died on July 13 in Fitchburg, Wis., near Madison. She was 93.

Her death, in a hospice, was confirmed by Heather Garrison, her granddaughter.

Ms. Wyman — whose work for Life, Look and other magazines went largely unheralded for decades — discovered what she called a “special kind of happiness” in photographing subjects like a little girl wearing curlers, a peddler hauling a block of ice from a horse-drawn cart and four boys holding dolls, pretending to be the plastic girls’ fathers.

“Taking pictures enabled me to hear the stories of the people I photographed,” she said in an essay for the Stephen Cohen Gallery in Los Angeles, one of her dealers, “which satisfied an immense curiosity to learn and understand the lives of others, lives different in experience and age from my own.” 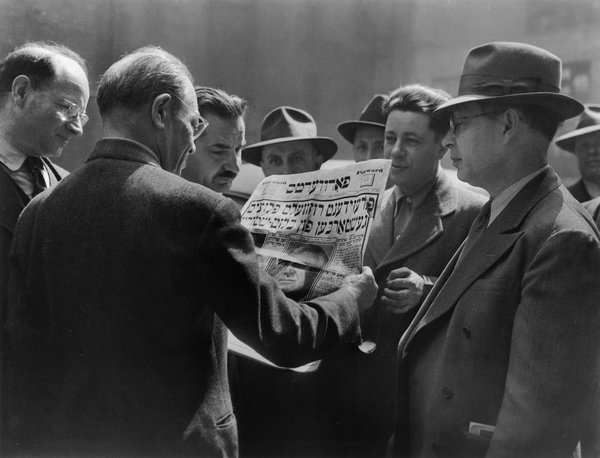 She was 19 and working in Manhattan as a photo printer for the Acme Newspictures agency when she photographed several men in Manhattan’s garment district in April 1945. One held up a copy of The Jewish Daily Forward, the Yiddish-language newspaper, as the others read about President Franklin D. Roosevelt’s death. The rich details of the well-dressed men’s clothing contrasted with the mysteriously hazy background, which seemed to suggest uncertainty for the United States after Roosevelt’s death.

Four months later, amid the celebration after Japan’s surrender ended World War II, Ms. Wyman came upon a group of ecstatic servicemen in Manhattan. A sailor tightly embraced a smiling woman — a picture that serves as a sort of bookend to Alfred Eisenstaedt’s better-known photograph, taken that day in Times Square, of a sailor kissing a nurse.

Ms. Wyman did not remain at Acme much longer. She had been the agency’s only female printer, and with men returning from the war, she was fired. She became a freelance photographer, selling pictures to magazines including Business Week, Fortune and Coronet. By 1948 she was in Los Angeles, working on assignments for Life.

She found street subjects there, as she had in New York and on other assignments in Chicago, St. Louis and Houston. But she also expanded her repertoire with Life to include the 1950 United States senatorial campaign between Richard M. Nixon and Helen Gahagan Douglas, the wedding of a Marine about to be shipped to Korea, a young couple at the beach and Hollywood actors making movies.

She photographed James Cagney wielding a shotgun while shrouded in smoke as the psychotic killer Cody Jarrett in “White Heat” (1949); Elizabeth Taylor joyously dancing in “A Place in the Sun” (1951) with Montgomery Clift (only his right hand is visible); and Ronald Reagan with his chimpanzee co-star in “Bedtime for Bonzo” (1951).

“I used to walk around the set with him, holding his hand,” Ms. Wyman told The Journal News of White Plains in 1984, referring to Bonzo, the subject of a Life assignment. “You began to think of him as a big kid with hair, except he had a very powerful grip, not like a 5-year-old.”

Ida Dora Wyman was born on March 7, 1926, in Malden, Mass., to Joseph and Rebecca (Michalow) Wyman, and moved as a child to the Bronx, where her parents, immigrants from Latvia, owned a small grocery store.

Her parents bought her a box camera when she was 14, and soon after that she began taking pictures of people and buildings in her neighborhood. At Walton High School she joined the camera club, honing her skills at taking and printing pictures.

After graduating in 1943, she found work at Acme, first in its mailroom and then as a printer. At lunch hour, she photographed nearby laborers and office workers with her Graflex Speed Graphic camera.

“Wearing the camera trumped my shyness,” she said in “Chords of Memory” (2014), a book of her photographs and text on which she collaborated with Melanie Herzog. “I wasn’t threatening and I wore saddle shoes and bobby socks.”

The six years featuring her most memorable work ended in 1951. By then she had married Simon Nathan, a photographer at Acme, who encouraged her to join the Photo League, a radical collective. Working there further inspired her to produce honest photographs that could effect social change. But when their first child, David, was born that year, she became a homemaker. Their daughter, Nancy, arrived three years later.

When she returned full time to photography in 1962, Ms. Wyman shifted her focus, working for Haskins Laboratories, a scientific research organization in Manhattan. Then, from 1968 to 1983, she was chief photographer at the department of pathology at Columbia University’s College of Physicians and Surgeons. She then returned to freelancing for various commercial clients.

During that period she also graduated from Empire State College in Manhattan.

She stopped freelancing in 1990 because of the physical toll of carrying camera equipment, but by then recognition of her earlier work was starting to grow. Her photographs appeared in various group and solo exhibitions, mostly in New York City, and fine-art galleries were taking notice.

“When people talk about the Photo League and Life magazine photographers, Ida’s name hasn’t often been in those conversations,” Sid Monroe, who with his wife Michelle, owns Monroe Gallery of Photography in Santa Fe, N.M., Ms. Wyman’s lead representative since the mid-1990s, said in a phone interview. “But she was every bit as good as the better-known names.”

In 2014 she was the subject of a solo exhibition at the Watrous Gallery in Madison, where she had moved eight years earlier.

Martha Glowacki, the gallery’s former director and curator of the show, “The Chords of Memory,” said that Ms. Wyman’s work was distinguished by her empathy.

“Unlike many street photographers,” Ms. Glowacki said, “she’d always introduce herself to her subjects and ask to take their photographs. If they said yes, she’d do it. She’d come and observe them again and again. She didn’t pose them. Because of that, she captured their genuine expressions. They weren’t looking furtively at her.”

In addition to her granddaughter, Ms. Wyman is survived by her son, her daughter and two great-grandsons. Her marriage to Mr. Nathan ended in divorce.

Ms. Wyman said the steady increase in attention to her early work when she was in her 70s and 80s surprised her.

“When I was making those pictures or doing assignments, I never dreamed they would have any value — or interest, even,” she told The Santa Fe New Mexican in 2007. “When you are shooting, you just want to get into print.

“It generated more work; the more you published, the more likely you were to get assignments. You wanted to get that credit line — that means a lot.”

Richard Sandomir is an obituaries writer. He previously wrote about sports media and sports business. He is also the author of several books, including “The Pride of the Yankees: Lou Gehrig, Gary Cooper and the Making of a Classic.” @RichSandomir