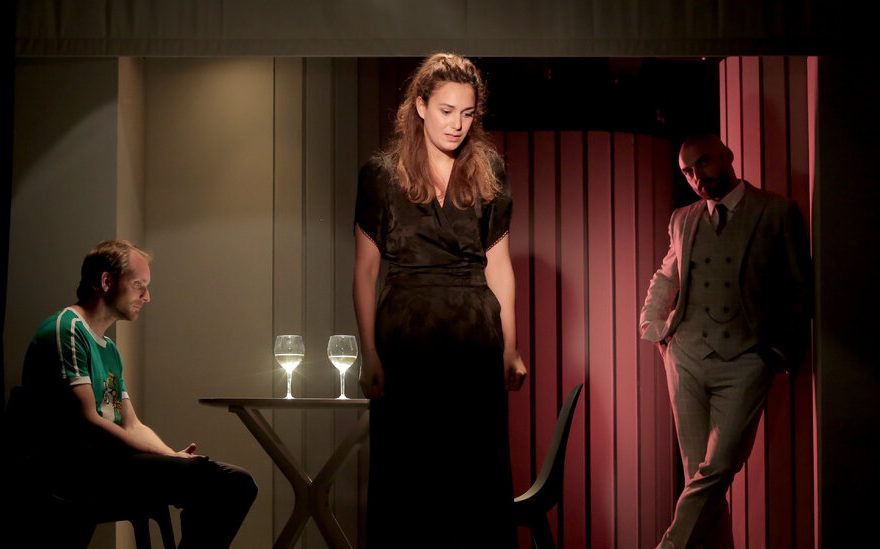 PARIS — Brexit, Britain’s protracted disentanglement from the European Union, was always bound to appear onstage. It didn’t take long for productions to reference it in London or in Edinburgh. With “Exit,” a new show at the Théâtre de la Huchette here, the political drama has now reached French theaters — in the form of an effervescent mini-musical.

There are sung poll numbers, trips across the English Channel, and plenty of French and British stereotypes. Yet “Exit,” which was co-written by Stéphane Laporte and Gaétan Borg, doesn’t dwell on politics. Instead, Brexit provides a backdrop and a metaphor for the play’s cross-border love triangle and journey of self-discovery.

It is a mighty premiere for a tiny theater. The Théâtre de la Huchette boasts only 85 seats, and because of Covid rules, it can currently be only 65 percent full. (The restriction is tentatively set to be lifted next week.) It is best known for its cult, long-running productions of two absurdist plays by Eugène Ionesco, “The Lesson” and “The Bald Soprano.” Both have run for over six decades, with the pandemic the longest interruption in the theater’s history.

Since 1981, however, La Huchette has also presented a third production after its Ionesco double bill. There is a touch of absurdity to “Exit,” too, most notably in the story line that brings the three main characters together.

All of them work in the video game industry. A French couple, Sybille and Antoine, co-founded a company called Anachronia, which makes intentionally dumb games like “Marie-Antoinette and the Danton Sheep” (in which the French queen is tasked with knocking off sheep) and “Marie Curie Super Radium,” with the famed scientist fighting the Nazis.

Then, when Sybille goes looking for a designer for a new project, she finds Mark, an aloof, sarcastic Englishman. The twists and turns designed to bring them together are hardly subtle. Sybille’s enthusiastic yet half-baked pitch would be unlikely to convince a seasoned professional, yet that’s where “Exit” really shines. 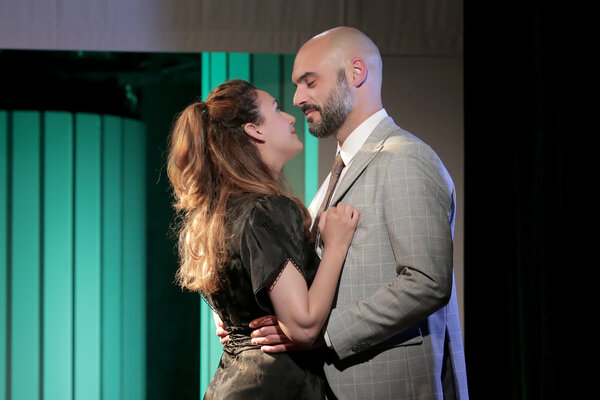 Each game gets old-fashioned, two-dimensional credits on a screen above the cast, and the actors don campy wigs and costumes to demonstrate it, complete with musical numbers. “Trouba-Dance,” Sybille’s Eleanor of Aquitaine-inspired dance game, is an especially uproarious example, and Harold Savary (Mark) brings deadpan game character impressions to the table.

The story is set in the run-up to the Brexit vote in 2016, but the political context is mostly mentioned in passing, as a way to signal how much time has passed as well as the cultural differences between Sybille’s French and British suitors. It does make for a few entertaining scenes, as when Antoine and Mark square off with mutual insults and each concludes that the other’s culture remains his “favorite monster.”

Laporte and Borg’s songs, with music by Didier Bailly, are less consistent when it comes to character arcs. Antoine (played by the endearing Simon Heulle, a bright presence) is initially depicted as a goofy nerd, but his insistence that Anachronia must produce only inane games — the company’s tagline at one point is described as “Anachronia: 100 percent laziness” — grows somewhat ludicrous.

Mark’s character is also seemingly bent to accommodate the plot. Near the end, after he and Sibylle admit their love for each other, he swiftly becomes controlling — a trait that isn’t really foreshadowed. “I just want to be your savior,” he tells Sibylle.

The goal is clearly to set up the denouement, Sibylle’s decision to be “alone, standing and without fear,” as the final song puts it. This conclusion is meant to be uplifting, but given the all-male writing and directing team, it feels dictated by empowerment as a generic goal, rather than arriving organically. It’s not exactly a feminist statement for a female character to find self-revelation through a man, only for him to become a pantomime villain, thus justifying a solo ending.

That’s a shame, because Marina Pangos carries much of “Exit” with her assured, vivacious performance as Sibylle, down to her interactions with the audience. Every time the character is on the Eurostar, she sits in La Huchette’s tiny auditorium, which stands in for a train car, and addresses audience members as fellow passengers, all with superb comic timing.

While “Exit” was part of the wave of premieres after theaters were allowed to reopen in France last month, other productions are returning to a second life onstage. “The Monstrous Ones” (“Les Monstrueuses”), a play Leïla Anis first published in 2017, found an audience even while theaters were closed. Between January and March, Anis took it to high schools, where artists were allowed to perform.

It was revived at the Théâtre Gérard Philipe in the Paris suburb of Saint-Denis this month, and it is an eye-catching achievement. Anis performs the lead role and plays four different characters, all women from different generations within the same family, linked by difficult experiences of motherhood.

Ella, the sole 21st-century character, learns at the start that she is pregnant and, after losing consciousness, finds herself in a psychiatric hospital, grappling with family memories. She becomes Jeanne, her great-grandmother, who loses her daughter Rosa after divorce; Rosa, who undergoes an illegal abortion; and Zeïna, from another side of the family, who hemorrhages during the delivery of her son in Yemen.

There is at times too much back story packed into this one-hour show, to the point that Ella’s growth as a character remains limited. But Anis, who was named an associate playwright with the Théâtre Gérard Philipe in 2020, paints a vivid, often poetic picture of the women’s shared trauma, both in her writing and onstage.

Her ability to physically transform from scene to scene — one minute a nearly feral presence with hair over her face, the next a shy young mother-to-be — is a rare gift, and the director of “The Monstrous Ones,” her frequent collaborator Karim Hammiche, makes way for her to explore it freely.

Hammiche joins her onstage for a few scenes, as Ella’s doctor during her hospital stay, but this is very much Anis’s show. For French high school students, it offered an opportunity to explore a darker, rarely discussed side of being a mother. Now, at long last, productions like “The Monstrous Ones” are playing in theaters again.

The Monstrous Ones. Directed by Karim Hammiche. Théâtre Gérard Philipe. Further performances to be announced.