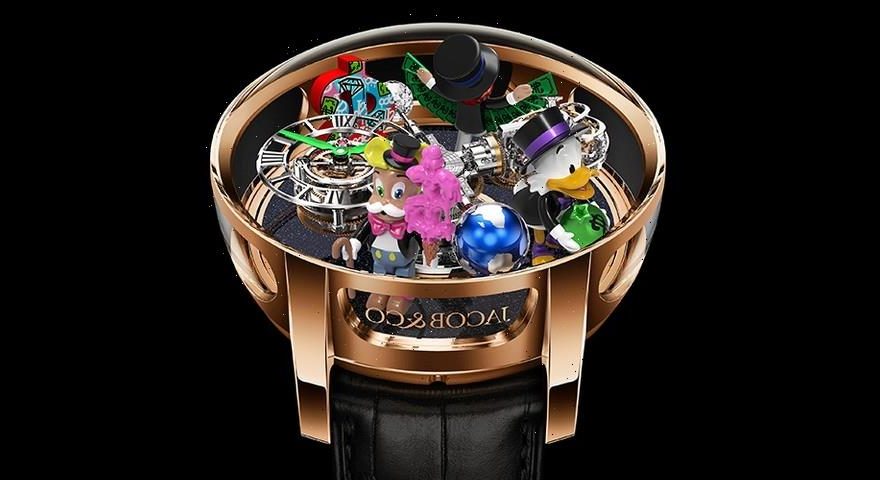 Street artist Alec Monopoly has lent his own inimitable style to Jacob & Co.’s flagship timepiece, the Astronomia, for a new limited edition collaboration.

A limited run of nine pieces are being produced featuring the recurring themes and characters seen in Monopoly’s body of work. That means a dial featuring statuettes of Scrooge McDuck, Monopoly Man, Money Wings and the almighty dollar.

The characters are drawn by Monopoly before being rendered in CAD to establish working dimensions, each is then hand sculpted and cast in gold before being hand-finished and finally hand-painted by Monopoly using bright acrylic paints.

“This is by far the smallest scale ‘canvas’ I have ever painted. Every element, brushstroke and color choice needed to be carefully thought out and perfectly executed,” says Monopoly. “My street art murals are often free flowing and wild but given the intricacies and meticulous mechanics within these watches I needed to approach the creative process with much more precision and patience.”

This 18k rose gold Astronomia’s manually wound four-arm movement is fixed at the centre of a black night sky base with each arm supporting a different mechanical feat, including a rotating one-carat spherical Jacob-cut diamond, a rotating hand-lacquered magnesium globe, a double axis tourbillon and a watch dial displaying minutes and hours.

“Alec is a young artist that started his career taking risks and not thinking twice about it,” says founder Jacob Arabo. “He acted as if he had nothing to lose and he continued to persist until he broke through to become world famous for his creativity and unique angle. I started out the same way by doing something different and unique and I persisted until I was able to break through.”