The “Late Late Show” host said he shouldn’t have been rude to a server at Balthazar in New York. “I hope I’m allowed in again one day,” he said. 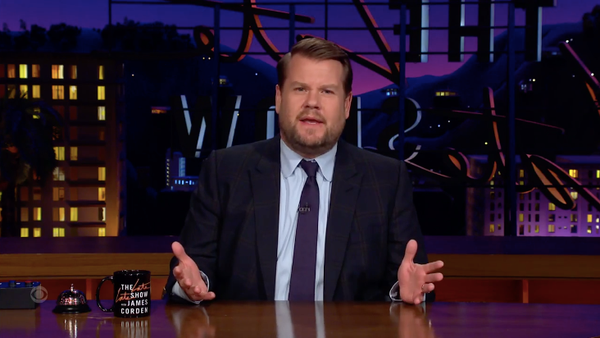 Welcome to Best of Late Night, a rundown of the previous night’s highlights that lets you sleep — and lets us get paid to watch comedy. Here are the 50 best movies on Netflix right now.

Last week, the owner of the New York restaurant Balthazar wrote on Instagram that James Corden had been banned after behaving rudely to a server. The post went viral, with many news outlets reporting on Corden’s alleged bad behavior.

On Monday night’s “Late Late Show,” Corden said that he’d been off social media while the show was on hiatus for the last week.

“Have I missed anything? Did I miss any news?” Corden joked.

“Like whenever these sorts of moments come my way, I like to adopt quite a British attitude — sort of keep calm and carry on. Things are going to get written about me, never complain, never explain. It’s very much my motto. But as my dad pointed out to me on Saturday, he said, ‘Son, well, you did complain, so you might need to explain.’” — JAMES CORDEN

“So when everybody’s meals came, my wife was given the food that she was allergic to. No, she hadn’t taken a bite, we sent it back, all was good. As her meal came wrong to the table the third time, in the heat of the moment, I made — I made a sarcastic, rude comment, right? About cooking it myself, and it is a comment I deeply regret, right. I understand the difficulties of being a server. I worked shifts at restaurants for years. I have — I have such respect and I value anyone that does such a job, and the team at that restaurant are so great. That’s why I love it there.” — JAMES CORDEN

“But here is the truth of it, right, because I didn’t — because I didn’t shout or scream, like I didn’t get up out of my seat. I didn’t call anyone names or use derogatory language. I have been walking around thinking that I hadn’t done anything wrong, right? But the truth is like I have — I made a rude comment and it was wrong, and it was an unnecessary comment. It was ungracious to the server.” — JAMES CORDEN

“I understand everybody getting upset and I accept — I accept everybody’s opinion. I also hate, as I said to the owner that day, that I’ve ever upset anybody ever — it was never my intention. It just wasn’t. And I love that restaurant. I love the staff there. I hope I’m allowed in again one day, so when I’m back in New York I can go there, and apologize in person, which is something I will absolutely do.” — JAMES CORDEN

“The Astros punched their ticket to the Series yesterday by sweeping the Yankees, but New Yorkers took their frustrations out on one Astros fan in particular: Senator Ted Cruz, who was in the city for the game. Man, New York does have a rat problem.” — STEPHEN COLBERT

“You know, you would think Ted Cruz would be unwelcome in a place like the Bronx — and if you did think that, you would be absolutely correct!” — JIMMY KIMMEL

“Yeah, there were a lot of boos, and a lot of extended middle fingers — which at this point, people, why does anyone bother? Ted Cruz sees those so often, he may not even be offended. He might just think that’s how people wave now.” — TREVOR NOAH

“So, even though they lost the game, I think New York won the battle last night.” — JIMMY KIMMEL

The standup comic Ariel Elias made her late-night debut on “Jimmy Kimmel Live” after going viral for how she handled a heckler during a recent set.

What We’re Excited About on Tuesday Night

Sigourney Weaver will sit down with Jimmy Fallon on Tuesday’s “Tonight Show.”