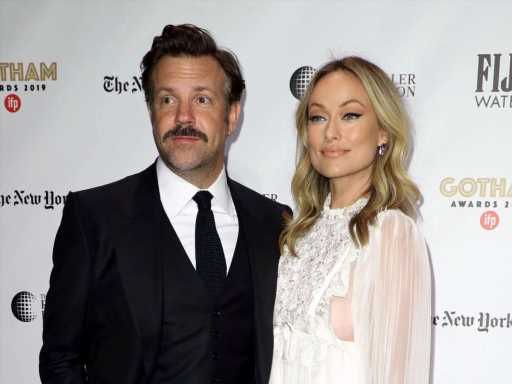 These celebs sure know how to start a new year with a bang, huh? Yesterday, jaws collectively dropped when new photos emerged of Harry Styles, 26, holding hands with Olivia Wilde at an intimate wedding in Montecito. Wilde has been directing Styles in upcoming drama Don’t Worry Darling, but these photos pointed to way more than an on-set romance — and when our own heads stopped spinning, we thought of Wilde’s ex-husband Jason Sudeikis, from whom she confirmed her split in November. After nearly ten years together, it would be hard to see your ex moving on with anyone, let alone, well, Harry Styles. But according to new sources, Sudeikis isn’t reacting to the news at all — he’s actually known about Styles for months now.

Getting confused about the timeline? We were too. One source tells Entertainment Tonight that Wilde and Sudeikis’ split actually happened “almost a year ago,” and that they’d only decided to go public with it recently. The couple shares son Otis and daughter Daisy, and their first priority has been creating a stable, supportive environment for their kids.

“Since her split from Jason, she has been more open to seeing new people,” the source shares. “She’s always liked Harry and it was one of the reasons she cast him [in Don’t Worry Darling] and, since then, she’s developed a thing for him..Olivia and Harry are together for long days on set and have gotten to know each other really well, so it’s all very organic.”

“Harry has already been introduced to Olivia’s kids and she has been spending most of the night out of the week with him,” the tip claimed. “The last I heard, they were getting serious and she’s basically moved in with him.”

That source says we can expect to see photos of the pair spending New Year’s in Santa Barbara together coming out soon, so we’ll stay tuned for that — and whether any of their other claims end up having truth to them. One thing’s clear though: Wilde isn’t going to let her ex of 10 years find out who she’s seeing from paparazzi photos. For all we know, the Ted Lasso star is already regularly lunching with his ex and her new beau.

Before you go, click here to see all the celebrities who are dating or married to older women.