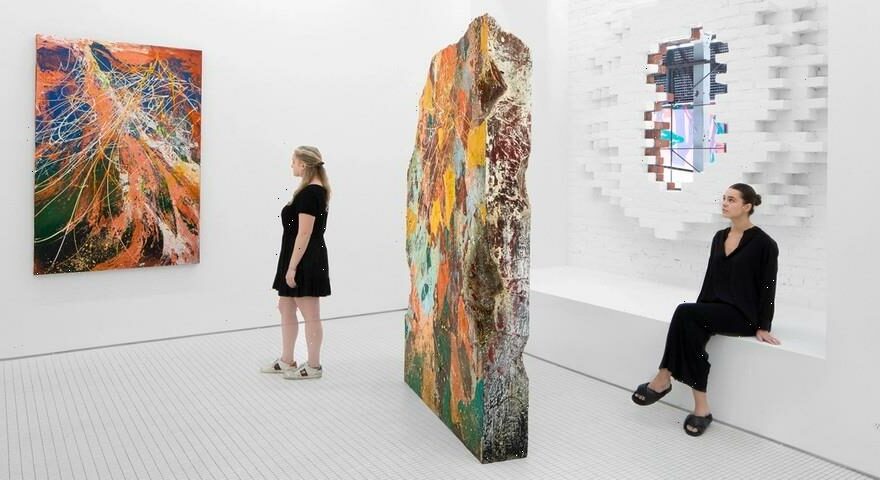 José Parlá was one of the many people badly affected during the pandemic. Having contracted a severe case of COVID, the artist had to be hospitalized with some doctors telling him that he may never paint again. Polarities is a new solo exhibition at Library Street Collective that proves otherwise.

On view in Detroit, the exhibition presents a series of new paintings and a large sculpture that beckons with rich layers of color. “It is psychological. To read it is not to look at what is written simply; it is about deciphering the feeling. I call it reading through feeling, those textures and marks symbolizing the psycho-geographical traces of memory,” said the artist in a statement.

Lying in a coma, Parlá recalled entering a dream-state where he visited many friends and family — as if to say a final goodbye. The experience translated into a highly spiritual series of paintings, where bold brushstrokes give way to fluid lines of script, that similar to a map, mark the passage of space and time.

As the child of Cuban immigrants, Parlá sees a sort of parallel between Havana and Detroit, contrasting the political systems that underpin the two. Laura Mott, Chief Curator at Cranbrook Art Museum explained further:

“Between the two cities, there is a similar entropy on the surfaces of their architecture, which Parlá sees as evident in his own painting aesthetic… On the greater world stage, the cities encapsulate the communist vs capitalist dilemma: Havana, as the home of Cuba’s authoritarian government; Detroit, as the often-used example of the perils of capitalism. Both systems blame each other for the state of the world, polar ideologies that have led to war and millions of deaths.”

To accompany the exhibition, Parlá worked with the gallery and Damiani Editore on a new 80-page hardcover book which catalogs his latest series. Catch Polarities as it’s on view in Detroit until August 24.

For more on art, HypeArt spoke with Inés Maestre for the latest Studio Visits.