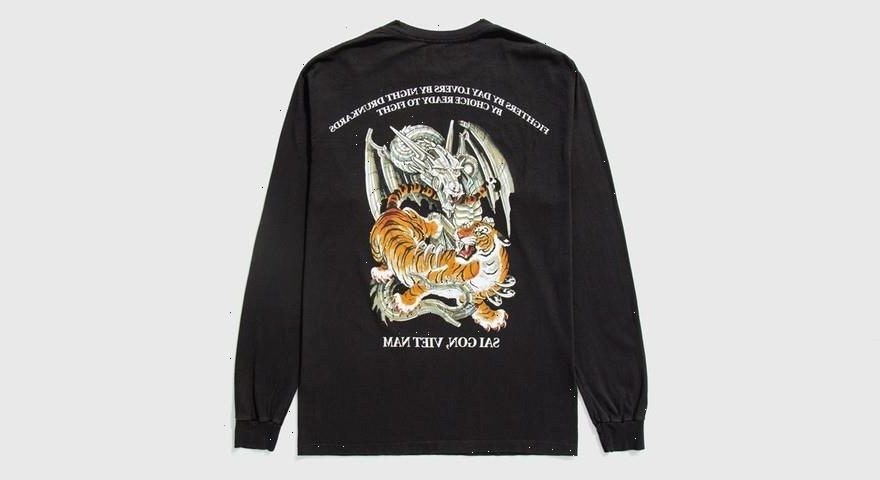 Sharing his story and its impact on his identity as a designer, Kai Nguyen is one of several rising Asian and Pacific Islander creators profiled for Adobe’s Diverse Voices campaign. While speaking to Public School’s Dao-Yi Chow, Nguyen introduced his passion for Vietnamese biker culture, anime and “ultra-futuristic clothing.” Serving as an emblem of tapping into one’s roots while pulling inspiration from his brand Lumières, Nguyen has designed a merchandise capsule that celebrates those who embrace where they’re from.

For the limited-edition T-shirt, Nguyen has revived ferocious graphics from old Vietnam war jackets to capture the complexity of the Asian American experience. The top features a tiger battling a mechanical dragon, but tension exists in the two characters’ styles: the tiger is reminiscent of traditional Asian watercolor paintings and the dragon looks like a robot from the future. “It signifies the places where I’m from and where I am now as a person, battling between the new and the old, or the duality of being Asian and American,” explains Nguyen.

For the designer, it’s important to create a connection to the community he occupies — something he’s mastered through his designs. “I know the moment that people see it, they’re going to lose their minds,” he says. “People have been trying to get me to do this style of graphics again, with the painting and all the colors.” Since his brand functions as an extension of Nguyen’s personal style, Lumières has garnered a loyal fanbase who identifies with his tenacious drive and too-cool-for-school “FUCK OFF” graphics, which emphasizes the importance standing up to racism and being proud of who they are. On his new merchandise, the tiger-dragon graphic is also surrounded by a battle-ready message that reads “READY TO FIGHT” and a proud “SAIGON, VIETNAM” at the bottom. Emphasizing the importance of being proud of who you are, Nguyen’s creations and career trajectory present a new vision of success for rising creatives, no matter where you’re from.

With profits benefiting the Tobar Foundation, a LA-based nonprofit that supports homeless individuals by providing temporary housing, this collaboration channels creative powers to support the community at large. The Kai Nguyen’s new T-shirt is available now exclusively through HBX. In case you missed it, delve into our three-part interview series that celebrates Asian and Pacific Islander creators. To learn more about Adobe’s Diverse Voices initiative, head to the brand’s website.
Source: Read Full Article