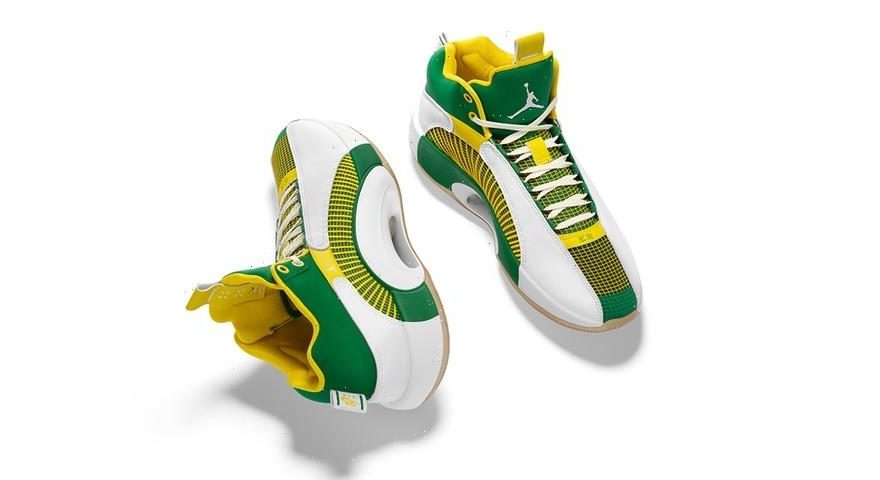 Boston Celtics point guard and Jordan Brand athlete Kemba Walker has sported a variety of Air Jordan 35 PEs over the course of the 2020-21 NBA season, and his latest pays homage to his high school team: the Rice High School Raiders. Though Rice — a private institution located in Harlem, New York — closed its doors in 2011 due to financial troubles, Walker’s loyalty to his alma mater shows through on this style.

The Raiders’ green and gold colors are spread across the shoe’s quarters, tongues, throats and toeboxes, providing an appealing one-two punch of varsity style and (unintentionally) contrasting with the Celtics’ uniforms. This mix is most notable on the toebox and quarter, where gives the AJ35’s signature Flightwire tech a bold pop of vibrance. Air Jordan 5-inspired tongues retain a familiar Jumpman log on the right foot and boast Walker’s signature winged #8 PE logo on the left foot. Down below, white and green outsoles use Zoom Air bags in the heel and forefoot plus a sturdy Flightplate 2.0 under the arch for explosive on-court feel. Traditional gum outsoles round off the look.

As the “Rice Alt” is a style created exclusively for Walker, it will not see a retail release. However, you can catch it in action during the rest of the Celtics’ season: Walker wore it in recent games against the Golden State Warriors and the Portland Trail Blazers.