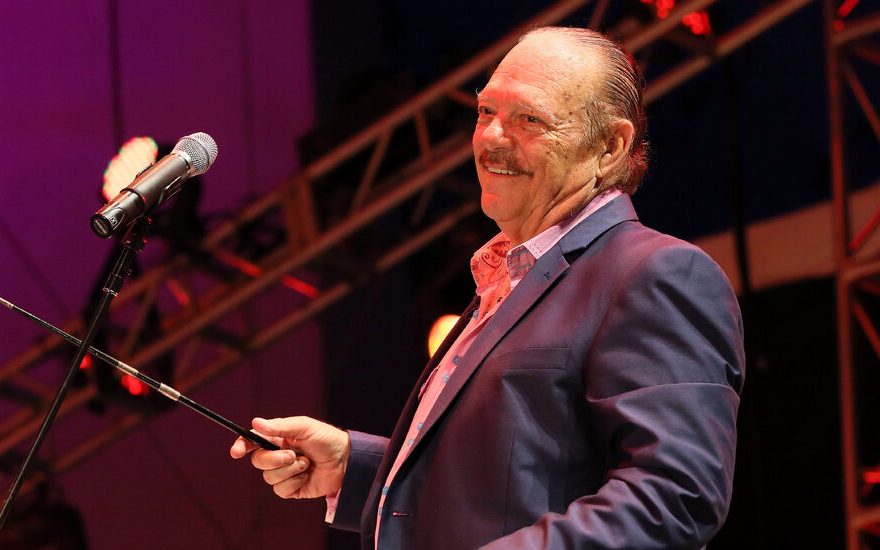 Born into a family of musicians, Larry Harlow was probably destined for a music career from the start. But it was his walks to class at the High School of Music and Art in Upper Manhattan that put him onto his lifelong passion.

“When I got out of the subway, I would walk up this huge hill and hear this strange music coming from all the bodegas,” he told The Forward in 2006. “I thought, ‘What kind of music is this? It’s really nice.’”

What he was hearing was early recordings by Tito Puente, the Pérez Prado mambo hit “Cherry Pink and Apple Blossom White” and other energetic new Latin sounds. Soon Mr. Harlow, a Brooklyn-born Jew, was fusing those and other influences into a career as a major figure in salsa, as a pianist, bandleader, songwriter and producer.

In the 1960s and ’70s, onstage and in the production studios of Fania Records, a label often described as the Motown of Latin music, he would help define salsa and spread it throughout the United States and around the world. He was affectionately known in the Latin music world as “El Judío Maravilloso” — the marvelous Jew.

His son, Myles Harlow Kahn, said the cause was heart failure related to kidney disease.

As a bandleader Mr. Harlow was most identified with salsa dura, or hard salsa — brass-heavy, bebop-influenced and danceable. He performed in small clubs and on big stages, including for an audience estimated variously at 30,000 to 50,000 at Yankee Stadium in 1973 as a member of the seminal group the Fania All-Stars, a show that proved to any doubters that there was a vast audience for Latin music.

He was just as influential behind the scenes at Fania, the Latin label formed in 1964 in New York by Johnny Pacheco and Jerry Masucci. Mr. Harlow was one of the first artists the label signed — his first Fania album, “Heavy Smoking,” came out soon after — but he also became part of the Fania brain trust, helping to sign numerous up-and-coming artists and producing some 250 records.

Aurora Flores, a music journalist and composer who was working with Mr. Harlow on his memoir, said he had an acerbic wit, an acid tongue and a willingness to defy conventions.

“He’d always side with the underdog,” she said by email. “His first recording, ‘Heavy Smoking,’ featured his girlfriend Vicky singing lead and playing congas, unheard-of in the Cuban patriarchy, where women were not allowed to touch the drums. He produced the all-female orchestra Latin Fever and later, when other bandleaders refused to accept Rubén Blades into the scene because he was too white and middle class, it was Harlow who took him under his wing, letting him front his big band.”

Lawrence Ira Kahn was born on March 20, 1939, in Brooklyn. His mother, Rose Sherman Kahn, was an opera singer, and his father, Nathan, was a bass player and bandleader who used the stage name Buddy Harlowe, from which Larry later derived his own stage name, dropping the E.

He began studying piano when he was about 5, and he also absorbed musical influences by lingering backstage at the Manhattan nightclub the Latin Quarter, where his father led the house band. The club was owned by Lou Walters, whose daughter would also sometimes hang out there — Barbara Walters, the future television journalist.

“When I was a kid, 10 or 11 years old, Barbara and I used to sit in the booth next to the spotlight,” Mr. Harlow told The New York Times in 2010, “and we saw every show that came in there, Dean Martin and Jerry Lewis, Joe E. Brown, Sophie Tucker.”

His first interest wasn’t Latin music. It was jazz. But, he said, he wasn’t welcomed in jazz circles. “So I went into the next closest thing,” he told The South Florida Sun-Sentinel in 2009, “where I could still improvise and stretch — Latin music — and I got really good at it.”

But that took some time. Mr. Harlow had been introduced to Latin music as a boy when his father would play the Catskills, where the Jewish vacationers loved to dance the cha-cha and mambo. But by the time he was walking to high school, the music he was hearing coming from those bodegas was growing more complex. While he was still a teenager, a bandleader named Hugo Dickens invited him to play piano in his Latin band, but the first time Mr. Harlow took a solo, Mr. Dickens gave him a blunt review: He was terrible.

So Mr. Harlow committed to getting better, buying up records and studying what the musicians on them were doing. While in high school he traveled to Cuba on Christmas break, and after graduating he returned there to immerse himself in Afro-Cuban music and culture, in the process expanding the Nuyorican Spanish he had picked up on the streets of New York.

“He was there with his reel-to-reel tape recorder taking it all in when the bombs started falling,” his son said in a phone interview — the bombs of the Cuban revolution that brought Fidel Castro to power at the beginning of 1959. That drove Mr. Harlow back to New York, but the music stayed with him.

But the style that would become known as salsa was still evolving at that point. The music represented a mix of Afro-Cuban, Spanish and other influences, tempered with American jazz and refined by Cuban, Puerto Rican and other musicians living in New York. Mr. Harlow was an influential part of that swirl, first as a sideman in other people’s orchestras and then as the leader of his own groups.

“Nobody was using a trumpet-and-trombone sound,” he told Latin Beat magazine in 2006, describing what he brought to the salsa mix. “It was my dream to use these instruments because then you could have a piano bass line, and then have the horns play counterpoints. So we had three to four layers of different things going on at the same time.”

In addition to the many records he made and produced at Fania, Mr. Harlow was instrumental in pushing Mr. Masucci, who died in 1997, and Mr. Pacheco, who died in February, to back a documentary directed by Leon Gast called “Our Latin Thing” (1971), which chronicled a performance by the Fania All-Stars at the Midtown Manhattan nightclub Cheetah.

The film became a word-of-mouth hit among fans of Latin music and boosted the profiles of everyone involved.

‘’We used to sell 25,000 copies of an album, and suddenly we’re now selling 100,000 copies individually, as bandleaders, and a million or more as the All-Stars,” Mr. Harlow told The New York Times in 2011, when a 40th-anniversary DVD of the film was released. “We were just playing around the ghetto, and all of a sudden we’re playing in soccer stadiums all over the world.”

Other career highlights included “Hommy: A Latin Opera,” which Mr. Harlow, inspired by the Who’s “Tommy,” created and presented in a concert version at Carnegie Hall in 1973. In 1977 he branched out from the snappy dance numbers he was known for to record “La Raza Latina,” an ambitious suite.

Mr. Harlow earned a bachelor’s degree in music at Brooklyn College in 1964 and later received a master’s degree in music from the New School. His marriages to Andrea Gindlin, Rita Uslan, Agnes Bou and Wendy Caplin ended in divorce. In addition to his son, a child of his first marriage, he is survived by his wife, Maria del Carmen; a daughter, Haiby Rengifo; a brother, Andy Harlow Kahn; and three grandchildren.

Late in his career Mr. Harlow would sometimes turn up on the records or in the shows of younger musicians and bands, including the alternative rock act Mars Volta. He found such homages gratifying.

“When someone comes up to me and says ‘Thanks for the music, thanks for the memories,’” he told The San Diego Union-Tribune in 1999, when the Latin Legends played that city, “that’s worth a million bucks to me.”