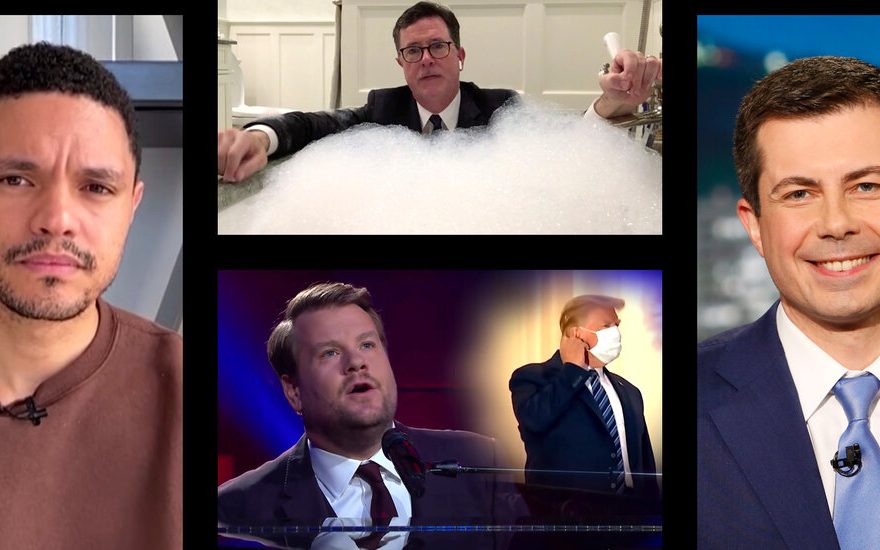 Late-night television has been dominated by the foibles of President Trump for the last four years, but 2020 was perhaps the most daunting of all. Leading up to the November election, hosts tried to expand their focus to other candidates, but when it came to staying topical, Trump continued to dominate the news, especially once the coronavirus forced the country to more actively consider its leadership (or lack thereof) during the crisis.

As the world shut down, late-night hosts offered not just levity during a troublesome and anxious time, but also a (mostly) comic counterbalance to the administration’s outpouring of misinformation. Then, as a wave of Black Lives Matter protests this summer drew more attention to the persistent and urgent matter of racial injustice in America, late-night shows became a forum for difficult but necessary conversations — and, in some cases, apologies.

It’s almost hard to remember when Trump’s impeachment trial and eventual acquittal were talking points and 20 Democratic hopefuls were vying to replace him in 2021.

From primaries to debates to town halls, hosts weighed in on the infighting and the outgoing candidates both in their monologues and with the contenders themselves. Elizabeth Warren, Bernie Sanders, Andrew Yang and the recently minted President-elect Joe Biden were frequent guests, and Pete Buttigieg did them one better. The former mayor of South Bend, Ind., hosted an audience-less episode of “Jimmy Kimmel Live,” roasting the president in front of Kimmel’s socially distanced staff.

“But when you don’t have a real audience, you have to fake one,” Buttigieg said. “Just like Trump’s inauguration.”

Some hosts went live after the national Republican and Democratic conventions, though Stephen Colbert did so only to say he refused to watch Night 3 of the R.N.C.

“Because right now in America, we’re facing a global pandemic that has killed 180,000 Americans, heavily armed Rambo wannabes are murdering people in our streets, the strongest hurricane in the history of the Gulf Coast is making landfall as I speak,” Colbert said. “And the R.N.C.’s message is, ‘Who’s up for four more years?’”

Trevor Noah’s D.N.C. recap included a musing on Biden as he accepted the party’s official nomination, calling him “the Cheerios of presidential candidates”: “He’s not the most exciting option, but deep down, you know he’s good for you.”

By November, most Americans agreed, though Trump’s contesting the election results and refusal to concede has turned late night’s pithiness into pity, as what Jimmy Kimmel has coined “Squattergate” continues. In its wake, Trump’s personal lawyer, Rudolph W. Giuliani, has been a late-night regular, providing more content than Trump himself during the president’s last weeks in office.

“So, for just a partial list of Rudy’s achievements since the election: He’s lost 48 lawsuits, he melted on camera,” Colbert said. “He got Covid, and he shut down a state legislature. The only thing more embarrassing would be if he married his own cousin. He what?!”

The U.S. rise of the pandemic in March quickly resulted in hosts getting out of the studio and setting up production from their own homes. Samantha Bee took “Full Frontal” into her New York backyard, while Seth Meyers toggled between his own attic and that of his in-laws, making full running bits out of set items like an old copy of “The Thorn Birds” and a talking painting of a sea captain.

Colbert took an early at-home show into his bathtub, later involving his dog, his wife, and his children in a living-room setup that saw him trading his typical suit for more leisurely attire, much like Trevor Noah wearing nightly hoodies on “The Daily Social Distancing Show.” Jimmy Fallon’s “Tonight Show” was also a family affair, with the host’s wife and children participating in bits to fill in for the fun and games he usually reserves for celebrity guests.

James Corden’s production team was going live from his garage — until he came into contact with someone who tested positive for the coronavirus in September and had to shoot several episodes of “The Late Late Show” remotely over Zoom.

The hosts also went without haircuts or their typical glam, much like the rest of the country.

Eventually, some hosts returned to their studios, still with no audiences except for crew members taking Covid precautions — though Conan O’Brien took up at Largo in Los Angeles, performing nightly to cardboard cutouts. That might be the last audience O’Brien has, though, as the comic announced he’s leaving his TBS show for an HBO Max variety series in the new year.

The coronavirus itself was a regular part of late-night programming beginning in late February, when Trump put Vice President Mike Pence in charge of the White House’s response.

“Pence actually has an interesting plan to fight the coronavirus,” Fallon noted. “He’s going to send the virus to a conversion camp where it can pray itself into the common cold.”

Trump’s regular coronavirus news conferences were just as confusing as many of his tweets — Twitter started flagging the most egregious ones in May — but that didn’t stop the ratings-obsessed president from gloating about how many people watched them. Meyers joked that the only reason anyone tuned in was because they were hoping for accurate information.

“Also, we’re only trapped inside watching because you kept ignoring the crisis and pretending it would go away until it was too late — we’re forced to stay inside and watch you because you screwed up,” Meyers said. “More people than ever are playing Scrabble right now, but it sure as hell isn’t because Scrabble is fun.”

But as the year went on, there would be more opportunities for the last-night shows to indulge in a bit of presidential schadenfreude. In June, only 6,200 people showed up for a Trump campaign rally in Tulsa, Okla. “Six thousand two hundred people isn’t a rally,” Fallon said. “It’s a graduation at a small liberal arts college.”

Then in October, Trump contracted Covid-19 himself, as did a number of his family members and staffers. Colbert jokingly referred to the White House as “The Infest Wing.” Corden opted for musical mockery, marking Trump’s recovery and insistence he could be immune to the virus with a parody performance of Paul McCartney’s “Maybe I’m Amazed” called “Maybe I’m Immune.”

The May killing of George Floyd by the police in Minneapolis, coming two months after Breonna Taylor was shot and killed by Louisville police officers, set off a summer of protests and focused nationwide attention on racial inequality and police brutality. The Black late-night hosts Desus and Mero ended episodes with calls to arrest the police who killed Taylor, and Trevor Noah spoke candidly in a viral video as well as on air.

Other hosts relied on Black members of their staff (including the musicians Jon Batiste on “The Late Show” and Reggie Watts on “The Late Late Show”) and special guests like Derrick Johnson, the president of the N.A.A.C.P., and Patrisse Cullors, a founder of Black Lives Matter, to discuss the causes and consequences of anti-Black racism.

For Kimmel and Fallon, this reckoning included apologizing for having participated in past blackface bits on “The Man Show” and “Saturday Night Live,” respectively. Kimmel, who took the summer off to spend with his family, apologized in a statement, while Fallon directly addressed the situation with his audience on air.

“I’m not a racist. I don’t feel this way,” Fallon said. “I realized that I can’t not say I’m horrified and I’m sorry and I’m embarrassed. I realized that the silence is the biggest crime that white guys like me and the rest of us are doing, staying silent. We need to say something. We need to keep saying something.”

The Best of the Rest

Kimmel had most of the candidates alongside John Kerry, Ted Cruz, Anthony Scaramucci and Nancy Pelosi doing a political version of “Mean Tweets.” Adam Schiff’s selection was from President Trump, referring to him as “liddle.”

Colbert’s lengthy chat with former President Barack Obama was split over two nights to include the typical fare about his new book and the Trump administration, as well as “Questions We’re Pretty Sure Barack Obama Has Never Been Asked Before.” Among them: “How does Dolly Parton not have a Presidential Medal of Freedom?”

And in a nice example of the kind of improvisational, making-it-work ethos that defined so much of late night this year, Fallon and the Roots performed a timely remote performance of the Police’s “Don’t Stand So Close to Me” using instruments they all had at home.

Although the president so far hasn’t seemed interested in a transition of power, late night will presumably be making its own transition soon, from a policy of all Trump, all the time to whatever jokes and gimmicks the Biden administration inspires. This should provide more room for nonpolitical humor, for better or worse, as well as the eventual cessation of the hosts’ constant Trump impersonations. It remains to be seen who among them can perform a passable Biden.

The late-night landscape will look slightly different with O’Brien exiting in 2021, though Lilly Singh and Desus and Mero will return, as well as the “Late Night With Seth Meyers” regular Amber Ruffin, whose own late-night weekly show on Peacock has been renewed for a second season.

With guests and hosts having to socially distance into the near future, at least, there isn’t much room for the up-close-and-personal encounters that viewers appreciate from late night. Hopefully the new coronavirus vaccines will enable a return to pre-pandemic form sometime in 2021 — this time, with less Trump.