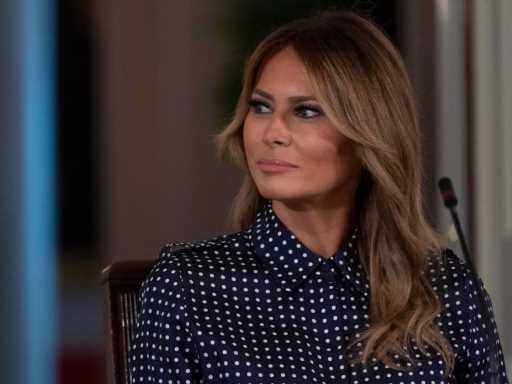 The hotly anticipated book, I’ll Take Your Questions Now: What I Saw in the Trump White House, written by the former Trump White House press secretary and Melania Trump’s ex-spokesperson, Stephanie Grisham, is causing major waves now that excerpts from the memoir are now making the rounds. It gives the readers insight into what the former first lady was thinking on Jan. 6, the day of the insurrection on Capitol Hill.

Grishman recounts how the day went down from her perspective and how the communication between her and Melania quickly dissolved as protestors breached the security barricades and stormed the Capitol. According to the excerpt, via Politico, she texted the first lady, “Do you want to tweet that peaceful protests are the right of every American, but there is no place for lawlessness and violence?” The reported answer from Melania might shock some, while others might think it would be exactly how she would answer. “No,” she wrote back, according to Grisham. The first lady was too busy to be bothered with the violence unfolding just down the street in Washington, D.C. because “she was at the White House preparing for a photo shoot of a rug she had selected.”

That indifference was a continuous theme from Melania as Grisham says she tried to initiate talks about the transition and setting up inauguration tea that has been a tradition since 1952 when the first ladies of the incoming and outgoing administrations meet for a tour of the White House. But the author claims that Melania and Donald believed the election results were fraudulent and no meeting with Dr. Jill Biden ever occurred.

While Melania didn’t have much to say on Jan. 6, she did issue a statement five days later, via Al Jazeera. She said she was  “disappointed and disheartened” by what had happened, but she also took the time to mention the “salacious gossip, unwarranted personal attacks, and false misleading accusations” about her “from people who are looking to be relevant and have an agenda.” Grisham resigned late on Jan. 6, so she never finished out the Trump term — and she clearly isn’t looking to mend fences with her former bosses, especially with her book dishing out all of the dirty details.

Before you go, click here to see quotes that prove Melania Trump is a lot like her husband.