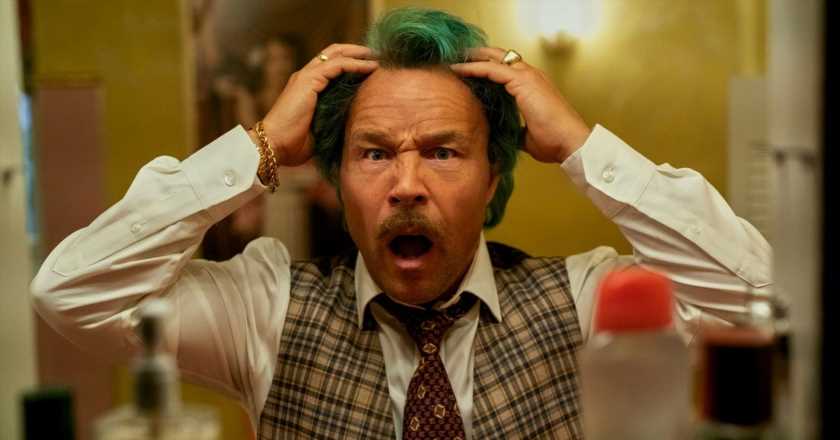 Stephen Graham (as in, yes, the hardened star of The Walk-In) joins Emma Thompson, Lashana Lynch and more for some musical mayhem in Netflix’s Matilda The Musical.

We have been waiting for what feels like forever for Netflix’s Matilda, so you better believe we were excited to see that the streaming platform has finally shared a sneak peek at its musical adaptation of the Roald Dahl classic.

With lyrics and music penned by Tim Minchin, the film boasts some serious star power; think Lashana Lynch as the kindly Miss Honey, Emma Thompson as the tyrannical Miss Trunchbull and none other than Stephen Graham (Stephen Graham! The on-screen tough guy! That Stephen Graham!) as the odious Mr Wormwood.

“My daughter told me if I didn’t do it she’d disown me,” Graham told Time Out when explaining his unexpected participation in the family movie.

“She and my wife are massive fans of the musical.”

Elsewhere, Andrea Riseborough takes on the role of Mrs Wormwood, Sindhu Vee is the warm and loving librarian Mrs Phelps and Alisha Weir steps into the shoes of the story’s iconic protagonist, Matilda.

Alisha Weir takes on the role of Matilda in the new Netflix musical movie.

While this film certainly adds a modern twist to the original tale, it still treads familiar ground for anyone who has read and loved the story of Matilda Wormwood.

An avid reader and mathematician, the eponymous heroine of the 1988 tome makes a point of devouring every single book in her local library (including hefty novels like The Secret Garden, Great Expectations, Jane Eyre, The Grapes Of Wrath, Animal Farm and Tess Of D’Urbervilles) before she’s even old enough to set foot in a school.

Unfortunately for Matilda, though, her brilliant brain goes largely unappreciated by the people around her. In fact, her cleverness proves to be a source of irritation for her wheeler-dealer dad and TV-obsessed mother, and the pair make a point of bullying and belittling her on a near constant basis.

Well, that is when they aren’t ignoring her… which is almost worse, really.

From This Is England to Line Of Duty, 10 Stephen Graham shows and films to add to your watchlist

When the brave little girl finally starts school, she hopes that things might be different – until she meets the evil Miss Trunchbull, that is.

Despite the cruel grown-ups in her life doing their best to dim her light, Matilda shines brighter than ever. And that is largely thanks to the important life lessons she learns in the books she devours night after night.

Sindhu Vee as Mrs Phelps in Matilda The Musical.

In time, Matilda finds a wealth of love, friendship and support in her fellow classmates and her teacher Miss Honey – and she makes it her business to help rescue them from the bullying they endure in their own lives.

Because Matilda, you see, has a power hidden away inside of her, one that helps her to rebel, to speak up, and to spark positive change for all.

Watch the trailer for Netflix’s Matilda The Musical below:

While no release date has been confirmed, Netflix has promised that we’ll all be able to catch Roald Dahl’s Matilda The Musical (which is tightly tied to the award-winning West End production) over the Christmas period. And honestly? We can’t wait to gobble it down like…

Well, like a gloriously gooey and glistening chocolate cake. Yum.

Netflix’s Matilda The Musical is expected to become available for streaming in December.