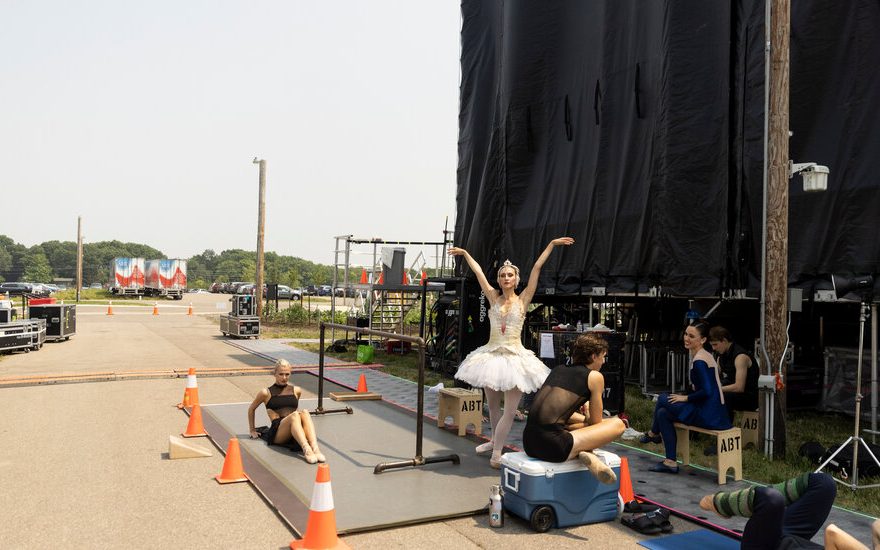 ST. LOUIS — On an afternoon in mid-July, the heat index in Forest Park here was hovering in the upper 90s. Members of American Ballet Theater, in town on tour, had just sweated through a company class that the dancer Tyler Maloney likened to “Bikram ballet.” He and his colleagues were on an outdoor stage, and its floor was warming like a griddle.

How to cool the stage before the matinee? How about scattering ice cubes across the surface?

Welcome to ABT Across America, a ballet tour not quite like any before it. The company wasn’t just performing outdoors. It was performing outdoors on a stage it had brought along, a stage on wheels that hydraulically unfolds from the form of a truck. And in between putting on shows for grateful, enthusiastic crowds, the dancers were traveling from city to city like a rock band, in sleeper buses emblazoned with tour dates on the side.

The hot stage fell into the category of what Kyle Pickles, the associate general manager, called “Things We Didn’t Think of Yet.” Also in that category at an earlier point: Where will the dancers shower? Running this 21-day tour, Pickles said, felt like a Choose Your Own Adventure book.

Like the ice cubes, the tour was an improvisatory response to unusual conditions: those of the pandemic. Kevin McKenzie, the company’s artistic director, told me that the idea was “born from desperation.”

Ballet Theater was to have celebrated its 80th anniversary in 2020, with shows in New York, across the country and abroad, but all the performances after March had to be canceled; 2021 wasn’t looking great, either. Last fall and this spring, the troupe sequestered small groups of dancers in “bubble residencies” and produced films and livestreams of new work, but the return of the in-person performances that are the company’s life blood kept receding with tides of risk.

Outdoors seemed the safest bet. David Lansky, the company’s general manager, thought of what he called a crazy idea: adapting the mobile stages used by touring bands and music festivals. Add a couple more trucks for equipment, plus six tour buses for 20 dancers and 20-something crew members, and Ballet Theater could take its show on the road, with fingers crossed for no rain.

The crazy idea had a further rationale. “A.B.T. started as a touring company,” McKenzie said, “but the current dancers don’t know what that was like” — the day after day sense of mission, building a fan base for ballet.

On the presenter side, interest was high. Lansky contacted 100 cities. Most, he said, were “over-the-moon excited to plan something after a year of nothing.” But as the logistical difficulties became apparent — finding a site, arranging power, permits, bathrooms — interest diminished.

The final list of eight spots leaned on several longstanding Ballet Theater partners, like the Lied Center in Lincoln, Neb., and the University of Minnesota, Northrop, in Minneapolis. St. Louis, which the troupe hadn’t visited in 26 years, got on the itinerary through the efforts of Susan Sherman, a former Ballet Theater board member and local force who formed a team, raised six figures in a few weeks and found an ideal location courtesy of the St. Louis Shakespeare Festival.

Getting dancers on board took some convincing, especially during early planning, when it was assumed that pandemic protocols would confine them tightly to the buses. Everybody was attracted by the chance to perform for live audiences again, but wary of traveling in such close quarters. “Who will be going?” was the usual first question.

No one was forced, and those who were game tended to be young — up for the adventure and the bonding experience, hungry to perform. Apart from the principal dancers Cory Stearns and Devon Teuscher (a couple offstage) and the soloist Catherine Hurlin, the roster drew mainly from the corps de ballet. A quarter of the dancers were apprentices.

This lineup had some effect on the repertory. For the opener, there was “La Follia Variations,” a lively small-group work that Lauren Lovette created just before the 2020 shutdown; for the closer, “Indestructible Light,” a crowd-pleaser that Darrell Grand Moultrie choreographed to jazz recordings during a 2020 bubble residency.

In between, there was a Jessica Lang duet to Tony Bennett songs and a classical pas de deux from either “Don Quixote” or “Swan Lake,” which Hurlin and Sung Woo Han performed as if they were principal dancers already. If this program didn’t bring the heights of ballet choreography to America, it offered varied enjoyment and a youthful, appealingly unhierarchical vibe.

In other words, a tour like this might counter perceptions of ballet’s inaccessibility. Kara Medoff Barnett, Ballet Theater’s executive director, stressed the implicit message: that “red velvet seats are not required,” that ballet can be “an inviting experience on your picnic blanket.”

Audiences “love peeking behind the curtain,” she added, “and this stage has no curtain.” Also, significantly, tickets were low-cost or free — subsidized by local presenters, the whole tour underwritten by donors like Bloomberg Philanthropies.

And it worked. Crowds showed up in numbers large enough that the surprised dancers really did feel like rock stars. Standing ovations were standard.

Behind the scenes was the Choose Your Own Adventure. I rode the bus with Pickles and other staff and crew from Minneapolis to St. Louis, about halfway through the tour. When they weren’t napping or nervously checking the weather forecast or joking about “bus rules” (no stinky cheese), they were busy on laptops troubleshooting upcoming tour stops. At one point, Pickles sent out a question to dancers, inquiring who might be interested in a laundry option the next day. Answer: almost everyone.

It was about a week before the tour started that Pickles discovered the buses didn’t have showers. In some cities, everyone would be sleeping in hotels (an upside of loosening pandemic restrictions), but for the stops where they would be spending the night in the buses, parked near the hotel, Pickles rented a few rooms where they could bathe.

When I asked dancers how the tour was going, they talked about how gratifying it was to be performing again, which they had expected, but also about how the bus beds were comfortable, which they hadn’t. (The bus drivers, for their part, noted how the dancers were much cleaner than their usual rock-band clientele.) Still, some dancers worked out an arrangement among themselves to sleep in the “shower rooms.”

Mostly, they grew accustomed enough to tour life to complain a bit about the sameness. (In St. Louis, the distribution of tour swag got them excited again.) Usually, touring dancers have to adjust to a different stage in each town, but since they brought their own this time, it was always familiar — bouncy, if sometimes hot.

Where to put that stage was trickier. At the Minnesota Landscape Arboretum, where the dressing room was in the Bee and Pollinator Discovery Center next to the red barn, the ground sloped from the stage so as to cut off views of the dancers’ feet. In St. Louis, setting up the stage at the bottom of an amphitheater-like glen avoided that problem, but squeezing it into that spot was a worrisomely close shave.

Despite the company’s desire for ABT Across America to echo the troupe’s transcontinental tours of the 1940s and ’50s, it was a much less grueling affair. During the war, in the 1943-4 season, the troupe performed in 73 cities, doing one-night stands in 48 of them. The tour 10 years later was similar: four months, 20 states in buses and trains, mostly a different city every day.

But if ABT Across America was shorter and cushier than that, it was significantly smaller and cheaper than the company’s touring model of recent years. “Even before the pandemic,” McKenzie told me, “presenters blanched at the cost of bringing 130 people and hiring an orchestra.” A new touring model similar to ABT Across America might “add another arm to our mission,” he said. “Dancers will be signing up. It would be extra work.”

Certainly, the tour opened up space for younger dancers. “It seems like in every piece, we’re pretty much featured evenly,” Carlos Gonzalez, a corps member, said. “It’s a great opportunity to dance and be seen and get experience we don’t usually get.”

And it felt good, Teuscher said, to reach audiences that Ballet Theater might not normally reach: “We are America’s company, so bringing ballet to America feels important.”

In each city, the company gave classes for the public. In St. Louis, I watched 10 girls take an absolute-beginners’s class at the Boys and Girls Club in a neglected part of town. The class, a week of prep classes and free dance attire (“For reals, we get to keep it?” one girl asked) had all been arranged by Antonio Douthit-Boyd, who grew up a few blocks away and had a stellar career with Alvin Ailey American Dance Theater before returning to St. Louis with his husband, Kirven Douthit-Boyd, to run the dance program at the Center of Creative Arts.

That Center, newly renovated and humming with activity, was the site of an intermediate and advanced class the next day given by company dancers. When I caught up with the advanced students after the Ballet Theater performance that afternoon, they told me that they had found the professional dancers inspiring but that they would rather be onstage themselves. That’s how inspiration is supposed to work.

The tour’s final stop, outside Rockefeller Center back home in New York, was chosen for historical resonance. It was there in 1940 — at the Center Theater, which was demolished in 1954 — that Ballet Theater gave its first performances. John Martin, in The New York Times, hailed it as an unlikely success, “the solidest foundation that has yet been laid for the development of the art of ballet in America.”

In 2021, the ABT Across America mobile stage didn’t fit between buildings, so a replacement stage had to be constructed. To include live music, by two pianists, two dances were swapped out, which meant that about half the dancers were also replaced, largely by principals.

Those choices might have made some sense, offering a tougher New York crowd something different from what the heartland got. I felt a little resentful on behalf of the tour dancers denied the final glory, but they didn’t miss that much, really. They had already had their rock-star experience, and nearly everything about the New York show — audience, energy — seemed smaller, squeezed into the city instead of out in the open.

The tour, in retrospect, grew larger, its unlikely success more impressive. Back on the bus, the production stage manager, Danielle Ventimiglia, had looked out on a double rainbow over cornfields and said, “God, our country is big.”

She and everyone else involved in the tour had managed to bring ballet across a large swath of it during a pandemic. Not a single performance was canceled for rain.