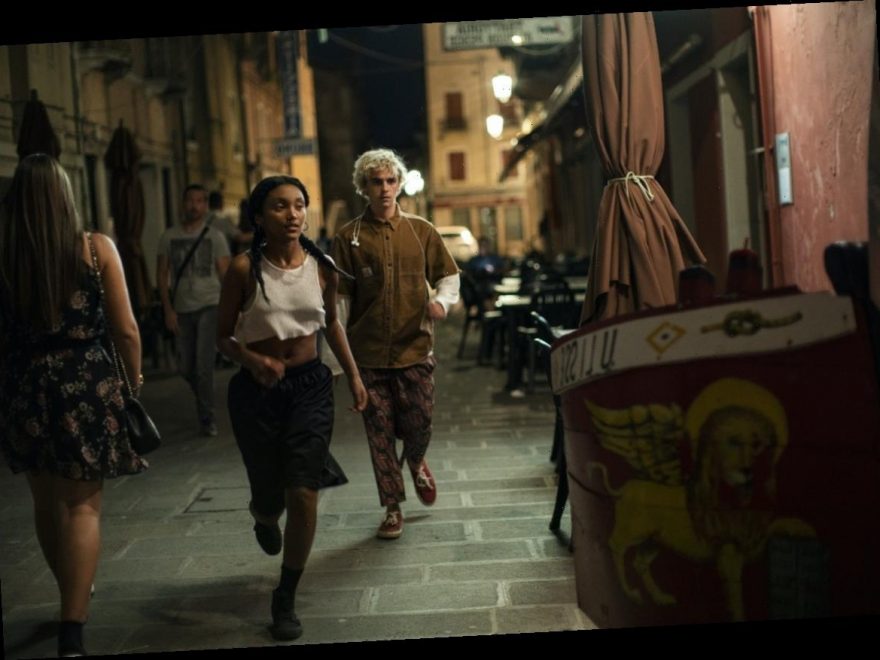 It may be peacetime, but the struggle for power on and off base doesn’t acknowledge such diplomatic distinctions.

Spoilers ahead for We Are Who We Are Season 1 Episode 3. In the most recent episode of Luca Guadagnino’s We Are Who We Are, the quaint, coastal town of Chioggia gathers for festival day, replete with flags, drum lines, and macho feats of strength performed in tights. The marquee event is a tug of war between the Italians and an American squad from base, led by soldier Richard Poythress (Scott Mescudi). His teen daughter Cait accidentally misses the bout, distracted by her new friendship with Fraser. It’s Fraser, too, who indirectly fractures the clique of army brats she usually runs with. It may be a peacetime posting that maroons these families together in Venice, but the struggle for power on and off base doesn’t abide by such diplomatic distinctions. When the GIs lose the duel — it’s 2016, remember — taunts of “America Second” inevitably lead to a testosterone-fueled scrum between supposed allies.

Colonel Sarah Wilson (Chloë Sevigny), newly installed as the Venice base’s commander, is fighting battles on more fronts than any other character. The Trump-supporting Richard is emerging as a foe, the two disagreeing over the troops’ readiness to be deployed. But it’s a peculiar feature of life on a cloistered base that families mix in defiance of the hierarchies that govern the workday. For all Richard’s dissent, Cait is spending more and more time at the Wilsons. When Sarah invites her to stay for dinner, she’s effectively giving her rival’s daughter a glimpse into what a different role she plays at home.

Because, perhaps ironically for a woman in command of a military base, it’s Sarah’s 14-year-old son with whom she seems to parry most. She’s devoted to Fraser, but not empathic, perceiving his extreme sensitivity without appreciating its limits. For example, she tells an embarrassing story in front of Caitlin that she doesn’t predict will hurt him even as her wife warns her off. But it’s not Sarah’s callousness — which is perhaps easy to imagine of a woman who has fought her way to the top of a man’s world — that’s most shocking; it’s her response to Fraser’s histrionics. When he slaps her after dinner, Sarah starts to cry; just hours later, when he wakes up with something like a panic attack, she invites him to crawl into bed with her. At work, she’s precise and hierarchical, but that order disintegrates at home.

At the Poythress house, too, relationships are breaking down. Richard’s wife Jenny feels neglected and his son Danny appears increasingly angry. Richard’s connection with Caitlin, deftly characterized in earlier episodes as the special bond between a straight-edged military man and his tomboyish daughter, is complicated by puberty. Danny, too, perceives a change in Cait and blames her for the tension among their friends. But it’s unclear that those friendships were ever based on more than the convenience of age and geography. When you’re growing up on a foreign military base, the world is simultaneously bigger and smaller. All friendships, however real, are also friendships of necessity.

If this episode is about the limits of hierarchies, whether they be imposed by the US military or the invisible dicta of high school, it’s interesting to note who is getting closer. Fraser and Cait are finding similarities deeper than their proximity as they explore gender expression and sexuality. They ask each other the questions — Who are you? Who are you attracted to? — that they’re hungry but hesitant to answer for themselves.

But it’s Sarah’s Brazilian wife Maggie and Jenny, originally from Nigeria, who are perhaps the episode’s strangest bedfellows. Without intending to, they wind up companions on festival day, bonding over the otherness that defines their lives. If our American characters are alienated by geography and culture, these two are doubly removed. They’re the soldiers’ wives, the ones who need to be “sponsored” just to live where they live; they’re also the non-Americans in this little manufactured America, trying to integrate without losing themselves. As they wander Chioggia, Jenny confesses that she doesn’t know who she is anymore, what God she worships. “I used to be a lot of things,” she tells Maggie, forlorn and mysterious. Maggie, who has raised Sarah’s son from birth but is never acknowledged as his mother, may be even more displaced. America, for them, is neither first nor second, but something harder to rank; not their home, but an echo defining their lives from a distance.