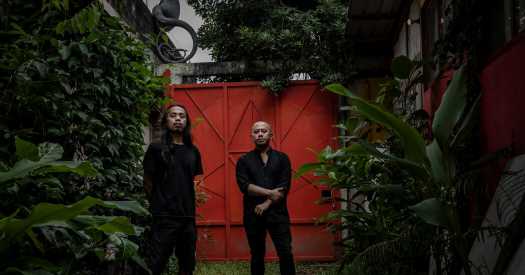 When coronavirus lockdowns began to grow among Indonesia’s 900 inhabited islands late last March, Rully Shabara and Wukir Suryadi, like many artists worldwide, began to fret over their musical future.

During the last decade, their duo, Senyawa, has emerged as one of the lone international emissaries of Indonesia’s rich experimental scene. They have hopscotched among the islands of Southeast Asia and flown abroad for prestigious festivals, earning 90 percent of their income on tour. Their tumultuous mix of heavy-metal aggression and free-jazz bedlam — bellowed in Shabara’s athletic baritone, backed with Suryadi’s elaborate homemade instruments — has dispelled notions that all Indonesian music chimes like gamelan or hypnotizes like one of its folk forms.

“When Senyawa started, if someone knew about Indonesia, they knew gamelan, Bali; they think everybody is playing traditional music,” Shabara said, laughing during a recent video call from Yogyakarta. “If you wanted to go to the United States and scream, people expected you to play the flute. But people know Indonesian music now. That door was opened.”

The pandemic threatened to slam it shut it again, so Senyawa came up with an unconventional plan. Last September, while making its new album, “Alkisah,” the duo decided its music would no longer be issued through a single label. Instead, the group would make an open online call for any imprint willing to enlist in a global confederation, with each member selling small localized editions of the same record. This week, at least 44 labels scattered across four continents will offer unique versions of “Alkisah,” each with distinct artwork and, in many cases, bonus tracks. It is the most daring iteration yet of Senyawa’s new credo: “Decentralization should be the future.”

“It’s not about Senyawa anymore. It’s not about our album,” Shabara said, jabbing his finger toward the screen as a cross-legged Suryadi perched behind him like a mantis, taking long drags from a cigarette. “We don’t want to dominate anybody. This can be anyone’s music.”

Unless they’re self-released, most albums fall under the purview of a single label. Or perhaps one imprint handles a record in the Americas, while another takes the reins in Europe or Asia. At best, the stakeholders coordinate release dates or promotional strategies, with priority often given to the label with the biggest potential market share. They are unequal members on one loose team.

Senyawa wondered what would happen if it not only grew the team to an unusually large size but also gave the players relative autonomy. After all, “Alkisah” is a dizzying eight-song suite about the revolution that’s possible when world powers collapse, built into a fun house of prog-rock, noise, metal and a little traditional chanting. Why not rethink, from every angle, the very system that delivers music to listeners?

The duo doled out graphics and audio files, encouraging labels to make covers that might appeal to their audiences and to commission remixes that might warrant local excitement.

“We want the labels to have ownership. Somebody in Beirut may have the Senyawa album, but it should feel like an album from Beirut, not Indonesia,” Shabara said. The Beirut cover glows in iridescent orange and pink, the band’s name scrawled across it in Arabic. One of four German editions is stark and striking, suggesting cool minimal electronics. Together, the assorted editions of “Alkisah” sport nearly 200 remixes. 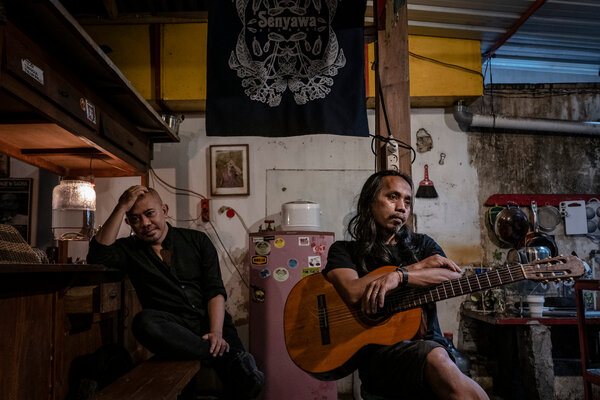 When James Vella first heard Senyawa’s plan last October, he was conceptually intrigued, if pragmatically uncertain. His boundless British label, Phantom Limb, had previously issued Shabara’s solo work, and he loved the pair’s adventurous ardor. But could his fringe upstart afford to divvy the audience for experimental Indonesian rock with more than 40 other imprints?

“As fans, we wanted to say yes,” Vella said by phone from London. “But any tiny label is forever one release away from failure. If you invest time and resources in a record that doesn’t sell, it could be the death knell. That is slightly more complicated here.”

Vella began to understand, though, that this plan would enhance the sort of resource sharing some labels already use. Phantom Limb, for instance, partnered with a Belgian imprint to market “Alkisah.” The 44 labels now commingle on the chat application Discord, swapping ideas and information.

These private international companies have digitally merged into a de facto mutual-aid network, mirroring Senyawa’s ethos back home. With an instrument-building shop, studio, kitchen, sleeping quarters and even indoors beehives, their Yogyakarta compound recalls an artist loft from a bygone New York. The group licenses Senyawa-brand hot sauce, cigarettes and incense for community relief. During the pandemic, Shabara has drawn 200 portraits of strangers, each of whom agreed to feed one neighbor in exchange.

For the labels, it’s not just altruism. Senyawa contracted Morphine Records in Berlin to oversee the production and distribution of 2,300 copies for a dozen imprints, driving costs far lower than if those businesses placed separate orders. One in Bali will get 50, another in Spain 200. The savings mean each transaction might net $10, giving these boutique brands a rare shot at a modest profit. Phantom Limb sold what Vella called a “healthy” chunk of its 300 copies before “Alkisah” was actually released.

“There may only be 500 people who are interested in the record I am putting out, but I am trying to find all 500,” said Phil Freeman, whose Burning Ambulance is one of two tiny American imprints working with Senyawa. “Wherever they are in the world, great.”

Shabara gushed when he discussed this scheme’s future feasibility, detailing organizational refinements he imagines. And Rabih Beaini, the owner of the German label handling manufacturing, suggested that bands big and small could increase their audience by recruiting a plethora of cooperative partners. “You could have 100 labels that reach obscure markets in countries where you might not normally sell your music,” Beaini said from Berlin. “It’s quite utopian.”

But Stephen O’Malley — the co-founder of metal duo Sunn O))) and a label owner — warned against reducing Senyawa’s idea into a novel strategy for sales. Several years ago, O’Malley invited Senyawa to perform with him at Europalia, a biennial arts festival, each event devoted to a different country’s culture. He reveled in their openness and enthusiasm.

“Senyawa are approaching this record as a way to connect with a lot of people, a way to collaborate,” O’Malley said from his home in Paris. “So why does it have to be sustainable as a business? Of course music is sustainable. It’s been around since the beginning of the species and transmitted the whole time.”

But the added connectivity is already changing the way Senyawa functions. This weekend, the group is presenting Pasar Alkisah, a two-day virtual festival of performances, D.J. sets, cooking classes and interviews, a massive act of coordination between the band and their dozens of partners.

In September, when Senyawa recorded “Alkisah,” it reconvened near Borobudur, the iconic Buddhist temple built on Java a millennium ago. Shabara and Suryadi isolated themselves in a friend’s sprawling home there, surrounded by a patch of jungle and a panorama of converging rivers and twin volcanoes. It was a postcard version of Indonesia — and a perfectly ironic place to capture a less stereotypical perspective on the world’s fourth most populous country.

“We are normal musicians like anyone else in the world who experiments. We just happen to be Indonesian,” Shabara said, his words arriving in a torrent. “If we want Indonesian musicians to flourish and be as highly respected as musicians from the West, we have to think we’re part of the world, not the ‘Third World.’”