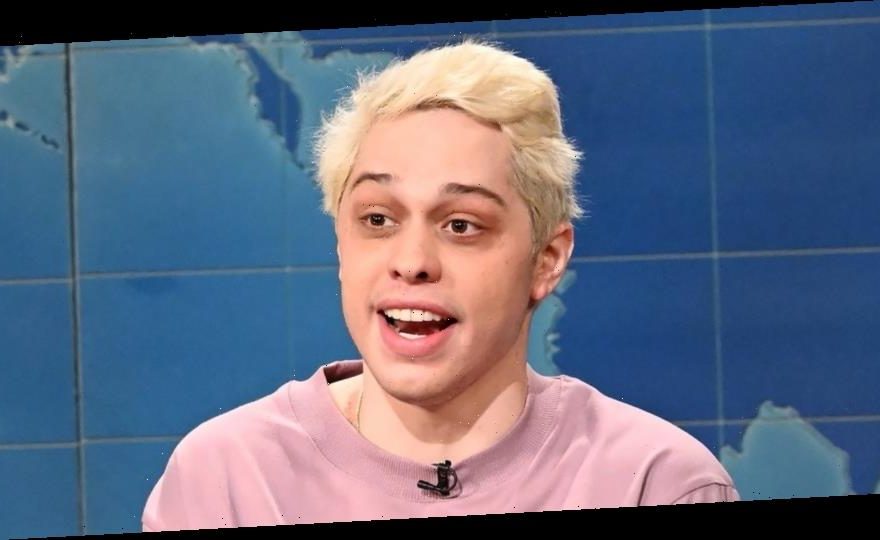 A fresh start! Pete Davidson got real on Saturday Night Live about Valentine’s Day and why he decided to get his tattoos removed.

The comedian, 27, appeared during the “Weekend Update” segment of the Saturday, February 20, episode to talk about the first Valentine’s Day of the coronavirus pandemic. After cohost Colin Jost asked how his holiday was, Davidson replied while making a suggestive expression, “I’m sure not as good as yours. Yeah, you’re the man.” (The A Very Punchable Face author, 38, married Scarlett Johansson in October 2020.)

The King of Staten Island star then divulged how he spent the day. “In some ways, I like the pandemic Valentine’s because it’s the first time being alone, like, wasn’t my fault,” he quipped. “I spent the night eating chocolates and watching a movie with my mom, which is why I’m officially moving out of the house. I am. One of us has to go.”

Their Valentine’s Day activities prompted a surprising revelation. “We were watching that Britney Spears documentary, but I had to turn it off when I realized my mom has, like, way more of a case to take over my finances than Britney’s dad, [Jamie Spears], ever did,” he joked, referring to Framing Britney Spears, which looks at the 39-year-old pop star’s conservatorship. “I was like, ‘Wait, she could do that and she hasn’t? Doesn’t she love me?’ All Britney did was shave her head. I got a life-size tattoo of the Tootsie Pop owl.”

Davidson then made light of his decision to have his tattoos removed. “I saw a picture of myself without a shirt and I look like a toddler went to prison,” he said. “I look like I’m carrying a shiv but, like, only to poke open a Capri Sun.” He first shared the news in December 2020, and the results are already apparent on his hands.

As for his relocation, the actor made a jab at the long-running sketch comedy series while explaining the upcoming move. “My mom is a lot like this show, you know? Like, no matter what I do I’m never asked to leave, right?” he noted. “Also, they’re both really old and noticeably fatigued.”

Davidson, who plans to stay in his hometown of Staten Island, finished his segment by dissing Jost. He claimed he “can’t afford” a place “where you live now,” adding: “Wherever you live, I’m sure it has more boats than people.”

When Jost reminded his costar that he also grew up in Staten Island, Davidson retorted, “Your grammar and lack of police record say otherwise.”