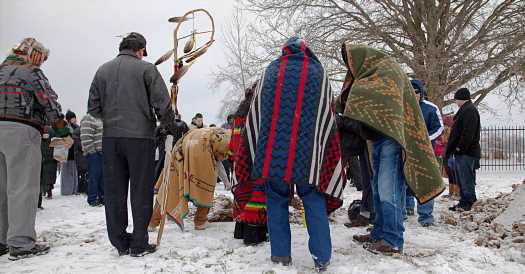 In 1990, when Congress passed a law that set criteria under which federally recognized Native American tribes could reclaim ancient burial remains and sacred objects, legislators hoped to encourage the return of items by museums and other institutions. But more than three decades later, some officials acknowledge that the law, known as the Native American Graves Protection and Repatriation Act, or NAGPRA, has not been as effective as they had hoped.

The remains of more than 116,000 Native American ancestors are still held by institutions around the country, and the National Park Service says that, for nearly all of them, the institutions have not linked the remains to a particular tribe, a designation known as “culturally affiliated” that allows Indigenous groups to reclaim the bones of their forebears.

“This is first and foremost an issue of Indigenous rights,” said Veronica Pasfield, a NAGPRA officer for the Bay Mills Indian Community in Michigan. “The right to protect the graves of your ancestors and relatives is one of the most fundamental human rights on the planet.”

But now the Biden administration is seeking to make regulatory adjustments that would help expedite repatriation proceedings and require museums to complete the process of identifying the remains.

“Changes to NAGPRA regulations are long overdue,” Deb Haaland, secretary of the Interior Department, said when she announced the reform initiative last month. “I’m hopeful this process will eliminate unnecessary burdens to the repatriation process and allow Indigenous peoples greater access to their ancestors’ remains and sacred items.”

The department, now led by the first Native American to hold a cabinet post, has drafted its own changes to the rules. But it plans on consulting tribal and native Hawaiian communities, who are also covered under the law, before making the details of those changes public when it publishes an official notice for comment in October.

In the announcement, the department said one goal of the changes would be to: “Streamline existing regulatory requirements by eliminating ambiguities, correcting inaccuracies, simplifying excessively burdensome and complicated requirements, clarifying timelines and removing offensive terminology in the existing regulations.”

Institutions have argued that identifying the cultural affiliation of remains can be difficult, time consuming and expensive, especially in cases where the remains are considered too old to be affiliated with a federally recognized, present-day tribe. Cultural affiliation must be established with multiple types of evidence beyond geographical information, they say, including biological, archaeological, linguistic and historical data, creating a significant research hurdle at a time when experts say federal funding for such projects has fallen behind demand.

But some officials for tribes say that institutions have exaggerated the complexity of the process.

“If you know there are human remains from a burial site, and you know their location and age, it’s relatively simple to identify what tribe that person is from,” Pasfield said. “Not affiliating remains is a way for universities and museums to hold onto what they want to conduct research on.”

Efforts to streamline the NAGPRA regulations stretch back as far as 2010, when the Association on American Indian Affairs said it began meeting with the Obama administration. Those conversations stalled during the Trump era, resuming shortly after President Biden’s inauguration in January.

“We are hoping that the White House does this as quickly as possible, because the regulations as currently written are confusing and verbose,” Shannon O’Loughlin, the nonprofit’s chief executive and lawyer, said. “The rules give institutions too much power over the process when their intent is to not repatriate.”

Pasfield said she hopes the Biden changes will include new ways to standardize what’s required to establish cultural affiliation between remains and their communities, because the current wording — “a preponderance of evidence” — is too vague.

One institution that Native American leaders have pressed to accelerate its effort is Harvard University’s Peabody Museum of Archaeology and Ethnology, which has the remains of more than 6,400 Native Americans and 13,600 funerary objects that are not culturally affiliated with any particular tribe, according to the NAGPRA database maintained by the government

In February, the Association on American Indian Affairs sent the university a letter that said there had been an “unconscionable delay in fulfilling its legal obligations.” The association said the museum had delayed repatriation claims by repeatedly asking tribes to present evidence beyond what is required by law. (More than 96 percent of the unidentified items in Harvard’s collection have been traced to geographic regions, but the university has said that geography alone is not enough to define a tribal link.)

A month later, Harvard responded with a letter to the association that acknowledged its imperfect track record but disputed accusations of noncompliance. “The museum has no interest in subverting or delaying NAGPRA’s implementation,” the letter states.” Our museum is not the proper place for these remains, and we are committed to their return.”

To reclaim artifacts, tribes currently undergo an expensive process overseen by the museums and universities they are petitioning. Repatriation requests are processed through guidelines created by the institutions, which also decide if the evidence presented satisfies their own criteria.

Some institutions have yet to inventory all the human remains and burial objects in their care as mandated by the law. The original deadline to complete the inventories was 1995. Enforcement has also been spotty, carrying penalties of only a few thousand dollars for institutions that flout the rules.

The complications of NAGPRA compliance have frustrated some Native American scholars.

“It’s not something that most Americans have to think about when they enter a museum,” said Jami Powell, a curator of Indigenous art for the Hood Museum of Art at Dartmouth College. “But would you want to work with an institution that had the remains of people from your community in storage?”

Powell said the Hood Museum has complied with the law and is working toward repatriating the remains of 27 Native Americans whose bones are in its collection. But she agreed that there are limited federal funds and manpower when it comes to research in this area.

“The work is never done when it comes to NAGPRA,” said John Stomberg, the Hood Museum’s director.

A new policy announced in March is supposed to help the University of California, Berkeley repatriate more than 9,500 Native American remains. Its collection is the largest one in the country, according to the National Park Service, and it has stayed that way, according to university officials, because previous administrators delayed repatriation proceedings.

“Historically, UC Berkeley has seen repatriation and NAGPRA as a process that conflicts with the research interests of the university,” Thomas Torma, the school’s liaison for the law, said over email. “As a result of these changes, in the past year, we have been able to transfer at least 297 individuals and 15,792 of their belongings back to tribes.”

When remains are returned, tribes have often held poignant reburial ceremonies. After the University of Michigan repatriated the remains of 94 Native Americans and 812 associated funerary objects to the Saginaw Chippewa Indian Tribe in 2014, members stood through freezing temperatures to commemorate the return at a cemetery established in 1995 as a place to rebury their ancestors.

“It is emotional, not just a physical thing we go through with repatriation,” Tony Perry, a participant in the ceremony, told the tribe’s publication at the time, “and it’s a deeply spiritual and emotional thing that comes from the heart.”

By clarifying timelines and closing loopholes in the existing regulations, the Biden administration hopes to hold accountable not just museums but also the many government agencies with Indigenous remains in their possession. Documents from the federal registry indicate that the Bureau of Indian Affairs, the United States Navy and the Army Corps of Engineers continue to revise their inventory tallies, increasing the number of human remains and funerary objects found in their collections, after being called out by the Government Accountability Office more than a decade ago for not fully complying with the law.

Critics of the current system argue that wherever you look, it is hard to detect great progress.

“At the current rate we are going, it’s going to be another seven decades before all 116,000 human remains are addressed,” said Chip Colwell, a former curator at the Denver Museum of Nature & Science who led its NAGPRA compliance program and later wrote a book about the fight for repatriation. “When leaders look at how much work is to be done, there is a deep sense of frustration.”