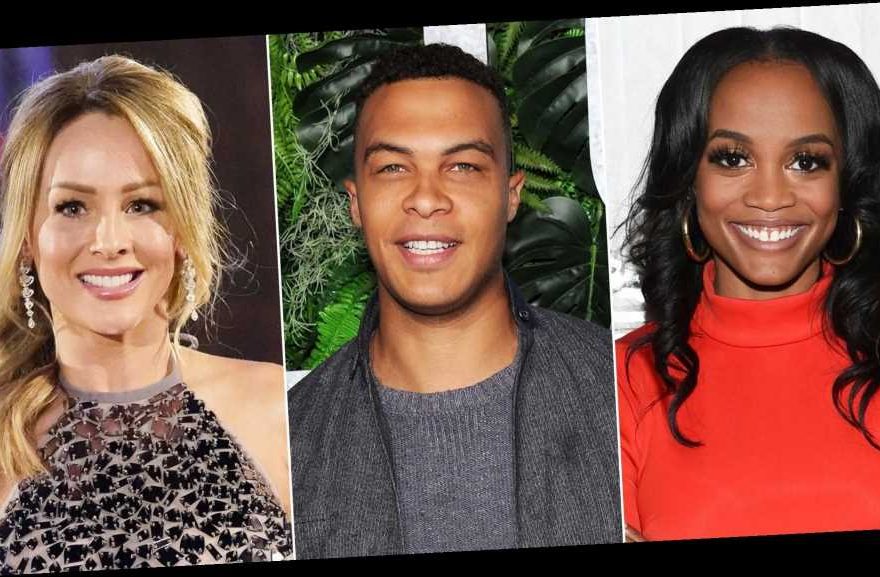 Cue the Tyra Banks‘ “we were all rooting for you” meme. Rachel Lindsay didn’t hold back when asked about Clare Crawley and Dale Moss’ messy split during an exclusive interview with Us Weekly.

Clare and Dale’s Messy Split: Breaking Down the Timeline

“I’m so disappointed by this breakup because I was down for Clare and Dale. I am close with Clare. I love Clare. She was so happy with Dale,” the 35-year-old former Bachelorette told Us while promoting MTV’s investigative docuseries Ghosted: Love Gone Missing. “And even when [my husband] Bryan [Abasolo] and I were with them, they seemed very happy with one another. And I know there were all these rumors about Dale — and I think that’s what’s so disappointing is meeting them, I wouldn’t have assumed that these rumors could possibly be true. And the more that time goes by since the breakup, it seems like the rumors were true.”

Moss, 32, confirmed he and Crawley, 39, called it quits on their five-month engagement last month. After the split news broke, the aspiring entertainment host was accused of being unfaithful to the season 16 Bachelorette — and only joining the show for fame. Moss, for his part, has maintained that he loved Clare and never cheated on her, telling his Instagram followers on January 30 that he is “f—king wrecked” by the split.

“It seems like Dale is all about himself. It seems like he wants to be in the spotlight,” Lindsay told Us. “I find it a big coincidence, maybe not so much of a coincidence, that he keeps finding his way to a camera or to his Instagram lives — get off.”

The MTV host noted added that she knows Crawley, who she has been in contact with over text, “is focusing on herself.”

Lindsay explained: “She’s surrounding herself with her pets, her family, and just taking it day by day. Meanwhile, Dale is like, ‘Hey, everybody look at me. Listen to me into what I have to say.’ It’s really disappointing because people may have their opinions about Clare, but one thing you can always say about Clare, she was honest about what she wanted. She didn’t hide it. She wanted babies. We all knew it with a plural. We knew that she wanted to get married. And so did Dale! So, to now say they were on different pages is such a cop out to me. You knew what she wanted and if that’s not what you wanted, then you never should have gotten down on one knee and made her think for a second that she could spend the rest of her life with you.”

When asked whether she believes Moss felt pressure from the Bachelorette producers to propose within the first two weeks of filming the show, Lindsay said no.

“I think people would have fully understood if he said, ‘Hey, this is a little bit too soon. I want to date you. I want to get to know you. I really care about you. Let’s just take our time,’” Lindsay said. “And I think Clare would have accepted that. I’m sure, maybe, like someone put the idea [out there] and said, ‘Hey, you know, she would like to be engaged. What do you think?’ But at the end of the day, Dale is a grown man. And that’s how he presents himself to, you know, he said he was questioned, I think, a number of times to be on the show. And he always said, ‘No.’ So this seems like a man who does what he wants to do. I don’t think that he was pressured, I think he was performative.”

Lindsay, for her part, got engaged to Abasolo, 40, during the season 13 finale of The Bachelorette in 2017. The twosome exchanged vows in August 2019.

“I’ve met some [Bachelor Nation] couples off-camera, and it’s sad to see that they didn’t make it in their marriage or relationship,” she told Us of the recent breakup surge among Bachelor and Bachelorette couples. “Coming off the show, I say, ‘You got to step away from the spotlight and really get to know each other and experience one another in the real world.’ The biggest question I had on the show was: Can this person fit into my life? And do I fit into theirs? Can we come together outside of this Bachelor bubble? And the main way to do that is getting on the same page and communicating, realizing that it’s not this fairytale in this fantasy that you fell in love under — it’s real life. And it’s hard and it’s messy and there’s a lot of sacrifice, but you have to be honest with one another and you have to communicate with one another. That will take you very far. And I think creates a strong foundation for a lasting relationship.”

For more from Lindsay — including her reaction to whether Moss will campaign to be the Bachelor — watch the video above.