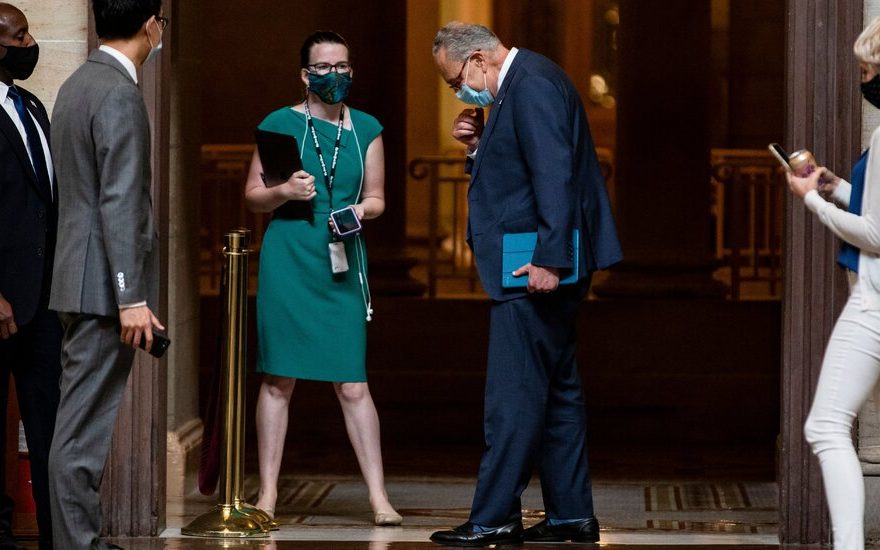 Emily Cochrane, who covers Congress for The New York Times, likens reporting on economic stimulus legislation to a marathon that doesn’t quite end. Last week, at least one marathon finished with the latest relief bill’s passage and, after some drama, the president’s signature. Ms. Cochrane, who focuses on congressional spending as part of a team of reporters covering Capitol Hill, discussed what goes into doing her job and the experience of reporting during the coronavirus pandemic. The following interview has been lightly edited.

What is a typical work day like for you?
Congress runs sort of on a schedule. There are some things that are sacrosanct to Congress, and one of those things is fly-in days on Mondays. They come in, and first votes aren’t until around 5, and they leave by about 1:45 on Thursdays. There are leadership lunches and caucus calls on Tuesdays that sort of set the tone for the rest of the week. And then you have votes that you kind of plan your day around.

A lot of the job is waiting in hallways, trying to catch people. You need to get them to answer questions on news of the day or figure out where they stand on legislation that’s coming down the pike.

How has that changed during Covid?
There is still a rhythm to the place, but the press corps cut down the number of people on the Hill. Before, an outlet would have five to six people on average, potentially more; now, it’s been cut down to one or two per outlet. Before, if someone said something newsworthy, your best bet was to try to find them. Or you talk to your sources and your colleagues on the Hill. Now, we’re circulating audio and sharing it among ourselves.

Have you limited the amount of time that you’re spending on Capitol Hill?
No, I’ve been pretty regular. That’s just something that I’ve personally been comfortable with and have chosen to do. So, what I’ve tried to do is just be among those who share audio.

Have there been any unique challenges to covering the stimulus talks?
It sort of feels as if you’re running a marathon, and then right when you’re about to hit Mile 26, they say: “Just kidding, we had our signs all wrong. You’re actually at Mile 12. You’re just halfway there. Keep going. Keep going.”

March was this really strange moment where the entire Congress just overwhelmingly came together three separate times and approved a huge amount of money. But after that, there was never a seamless process to reaching a bipartisan agreement on legislation.

I thought it was really challenging to cover the negotiations where there was a lot of public posturing, but not a lot of actual movements. You want to tell people what’s going on, but you don’t want to get people’s hopes up. Wading through the political side of things, the policy side of things — it was challenging to weave that all together and be cleareyed about what was going on and what was influencing people and the decisions they were making.

How do you figure that out?
The thing that I kept thinking was, Do I want people, who desperately need some kind of relief, to get the impression that it’s coming any day now, when it didn’t feel that way? There’s a feeling you get from just being in the building. You could get a sense of when people were really working to find a solution and when they weren’t.

What is the most enjoyable part of the job?
The fact that you have the ability, in the nation’s Capitol, to walk up to any elected member and just start peppering them with questions — is a pretty unique situation. I don’t think I quite realized, before I started actually covering Congress, how easy it could be to ask members of Congress questions in a physical sense. There’s a lot of access in the building — a lot of access to a lot of powerful people. The other thing is, especially after this year, the press corps has really come together to collaborate and to support one another in a wonderful way. There have been only a couple of coronavirus cases in the press corps. We’ve managed to stay pretty safe. It’s a really great group of people who has banded together while still competing.