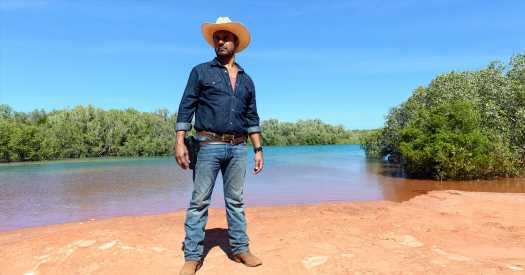 While America debates how it wants its television cops to look and act — or whether it wants them at all — the rest of the world is happily sending us theirs. This month alone we’ve received cop or cop-adjacent shows from Armenia (“Special Division,” MHz Choice), Brazil (“Good Morning, Verônica,” Netflix), Britain (“Code 404,” Peacock), Canada (“Coroner,” CW) and France (“The Crimson Rivers” and “The Paris Murders,” PBS Masterpiece Prime Video).

So why single out the Australian outback policier “Mystery Road,” whose second season comes to Acorn TV on Monday? Glad you asked.

First, and sufficient in himself, is Aaron Pedersen, who plays the phlegmatic detective Jay Swan. Hunting drug gangs, human traffickers and other sordid miscreants up and down the vast expanse of Western Australia, Swan labors through family discord — he’s a negligent ex-husband and father — and the suspicion he inspires in both whites and his fellow Indigenous Australians.

Pedersen, who has embodied Swan in two feature films as well as the two seasons of “Mystery Road,” takes strong-and-silent to a far edge that could be comical if it weren’t grounded in palpable remorse (for his own failings) and anger (at the racist and criminal exploitation of the Indigenous population). He walks with a splay-footed strut that’s both swaggering and endearing, and his “are-you-kidding-me?” game is very, very strong.

He’s fun to watch in the show’s moments of action, when he dishes out justice with a slightly lumbering menace. But he’s even better playing bemusement — his laconic reactions to rural eccentricity bring the show as close as it gets to humor — or sorrow and anxiety, in Swan’s encounters with his bitter ex-wife, vibrantly portrayed by Tasma Walton.

Nearly as central to the show’s appeal is its evocation of the harsh, bleakly beautiful landscape of Western Australia. Swan’s somewhat murky official status — he’s referred to simply as a detective — allows him and the show to pop up in various parts of the state, and the new season lands in a particularly remote and scenic area, around the town of Broome on the Kimberley coast. Dusty streets and fly-specked shacks give way to beaches whose striated sandstone towers make striking backdrops for car chases through the sand.

And along with the tangibility of the physical environment, there’s the authentic feel of the show’s depiction of the lives of the Indigenous characters, who make up the majority of the cast. That’s no surprise, given that both directors, and three of five writers of the season’s six episodes are Indigenous themselves.

Season 2 begins with Swan’s arrival in the fictional town of Gideon (“Pearl of the North” on the battered sign that welcomes him there) after a crabber finds a headless body. Swan quickly determines that meth is being moved through a nearby truck terminal, but other plot strands are more important to the story’s texture: the sudden proximity of Mary, his ex, who works at the local hospital; tension at a dig where an ambitious European archaeologist (Sofia Helin of “The Bridge”) is looking for Aboriginal artifacts; and the frustration of a local cop (Jada Alberts) trying to keep alive the cases of missing Indigenous women.

Alberts is excellent as Swan’s straight-arrow temporary partner, with a testy energy that balances Pedersen’s stoic minimalism; Judy Davis filled the role of local counterpart in Season 1, and that’s a high bar, but Alberts crosses it.

In other ways, Season 2 is a step backward. There’s too much thematic ground being covered, and the balance between crime-solving and sociology tips too far in favor of high-minded speeches. The whodunit fades into the background, and, with the exception of Swan and Mary’s sparring, the other material doesn’t make up for it; the archaeology plot, which tries to tie physical violence to cultural oppression in an unpredictable way, is particularly muddled.

But Pedersen duckwalks above it all, carrying the show on his considerable shoulders (with solid help in the new season from Walton, Alberts and, as Mary’s problematic new boyfriend, Callan Mulvey). “Mystery Road” is frequently labeled outback noir, but with its vistas, its sweaty, buggy ambience and its frontier righteousness, it’s really a hard-boiled neo-western, and Swan is its roving Paladin. Have pump shotgun, will travel.