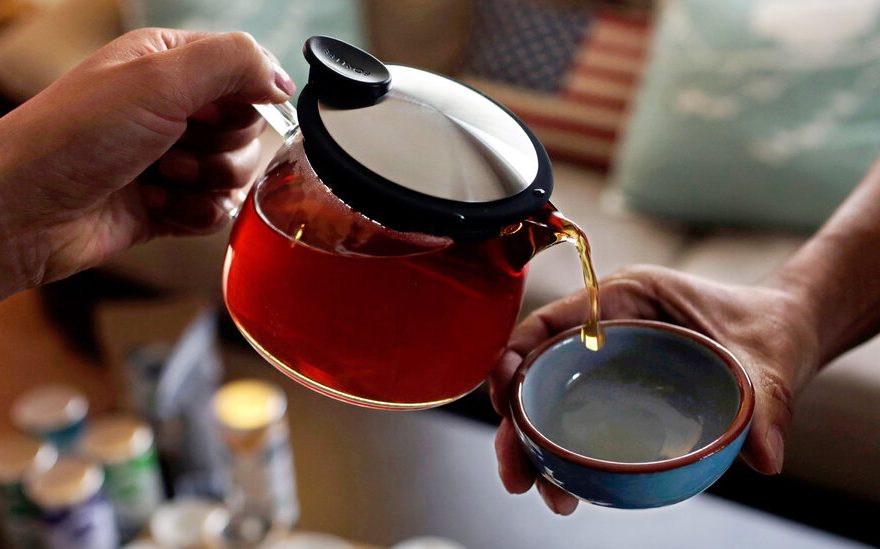 The consumption of tea around the world is second only to water, and it seems to have grown during these crisis-ridden times. TeaTime magazine in Birmingham, Ala., had a 30 percent increase in Facebook followers and a 45 percent increase in Instagram followers over the past year, according to Lorna Reeves, the magazine’s editor.

As pandemic fatigue and anger wear on, more people seem to be turning to tea for its health benefits and also as a remedy against burnout.

“It was exhausting not to have those pre-pandemic coffee breaks, not to feel like I had the ability to walk away from my desk,” said Leilani Zee, a book publicist in Las Vegas, “so I started to ritualize teatime.”

Adrienne Blaine, a video producer in San Francisco, and her boyfriend have recently gotten into drinking tea, finding it the perfect beverage for the homebound. “There’s been a culture of going out for coffee,” she said, “but there’s something to be said for staying in for tea.”

Here’s how to develop a tea ritual all your own.

This is not “Downton Abbey” cosplay. While ceremony, protocol and ritual infuse tea practices worldwide, the manner of teatime is personal. Mister Rogers drank hot cranberry juice out of his mugs, so you can do anything (just avoid the hallucinogenic ayahuasca). The famed British version of afternoon tea can be as imposing as its fine bone china and three-tiered towers of snacks. By contrast, goûter, France’s teatime equivalent, often includes a casual bar of chocolate in a baguette. Chado, Japan’s tea ritual, favors tranquillity over decadence.

Tea is often paired with snacks that can be sweet (pastries) or savory (finger sandwiches). Indian tea culture has a particularly vast array of snacks, including miniature dried-fruit samosas and chakli, a fried spiral of spiced lentils. For scones, Ms. Reeves recommends freezing them raw and baking them individually in a toaster oven.

Mana Reshamwala, a Japanese native who lives in Durham, N.C., carves out an hour every other Thursday for a teatime with a neighborhood friend that complements a meditative activity like gardening or knitting. Her green tea sipped out of earthenware Hagi-Yaki cups is traditional. The rest is personal. “It’s very Mana time,” she said. “Just my time.” Asked what other personal time she has, Ms. Reshamwala, a mother of two young boys, laughed.

Any time can be teatime.

Ataya, Senegal’s tea ceremony, can last three hours. But most practical teatimes are about 30 minutes. The most common time is 3:30 or 4 p.m., but do whatever works for you. Perhaps, like Oprah Winfrey, your teatime is a morning chai. For late lunchers or those with particularly high-stakes mornings, maybe the elevenses, which occurs at 11 a.m., is a better fit. But teatime can just as easily be a calming sip of chamomile before bed.

There’s a lot of gear. And apparently 24 million ways to make tea. But here are some guideposts. Boiling water will ruin green or oolong teas, Ms. Reeves said. Teas have various steeping times, with an average of three minutes, she added, but check packaging instructions (oolong teas are great for multiple steeps). If you steep too long, you can add more water. Tea enthusiasts value loose leaves over tea bags. A BBC investigation into optimal tea recommended five-minute steeps and reported that the same tea will taste sweeter out of a red mug than a white one.

Teatime is the opposite of coffee or lunch consumed over your work-from-home laptop. On top of picking what time works best for you, pick a suitable location. Remember office coffee breaks? Apply similar strategies: Avoid work or distracting devices. No email. No phone. And maybe nobody but yourself.

Afternoon tea is a convenient segue from pandemic at-home schooling to pandemic at-home home life. Three times a week, Calder Norris, an 8-year-old in Manhattan, has teatime with his nanny (mostly he drinks nut milk from a teacup). “People think teatime is for drinking tea — it’s not just that,” he said. “Our relationship grows stronger.”