Shakira was hoping that her tax evasion case in Spain was behind her, but on Tuesday, a judge made it clear that the pop singer must stand trial for tax fraud. While she has maintained her innocence throughout this ongoing legal situation, the Spanish government claims she still owes $13.9 million for the time she lived in the country from 2012-2014.

Now that she’s due to stand trial, the possible outcome is quite daunting: an eight-year prison sentence and “hefty” fines, according to the Associated Press. Shakira already turned down a plea deal earlier this summer, so the judge’s final clearance means that the trial is moving ahead at full speed. The “Hips Don’t Lie” singer’s representatives insist that she wasn’t living in the country during that time period and swears that her debts are all paid to the Spanish Tax Agency.

Shakira openly discussed her tax issues with ELLE earlier this month which she described as “false accusations” by Spanish authorities. “First of all, I didn’t spend 183 days per year at that time at all. I was busy fulfilling my professional commitments around the world. Second, I’ve paid everything they claimed I owed, even before they filed a lawsuit,” she explained. “So as of today, I owe zero to them.” She also added that she “was advised by one of the four biggest tax specialist firms in the world, PricewaterhouseCoopers,” and that she’s “confident” she handled her financial obligations “correctly and transparently from day one.”

The legal case also comes on the heels of her breakup with longtime partner Gerard Piqué, so it couldn’t come at a worse time for her. However, Shakira feels that she will prevail in this case and prove to the Spanish government that they are the ones who are fighting a losing battle.

Before you go, click here to see the most important celebrity lawsuits over the past 15 years. 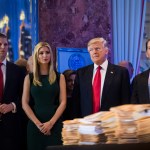 Donald Trump, His 3 Eldest Children, & Their Company Are Being Sued For Massive Amounts of Fraud By the State of New York