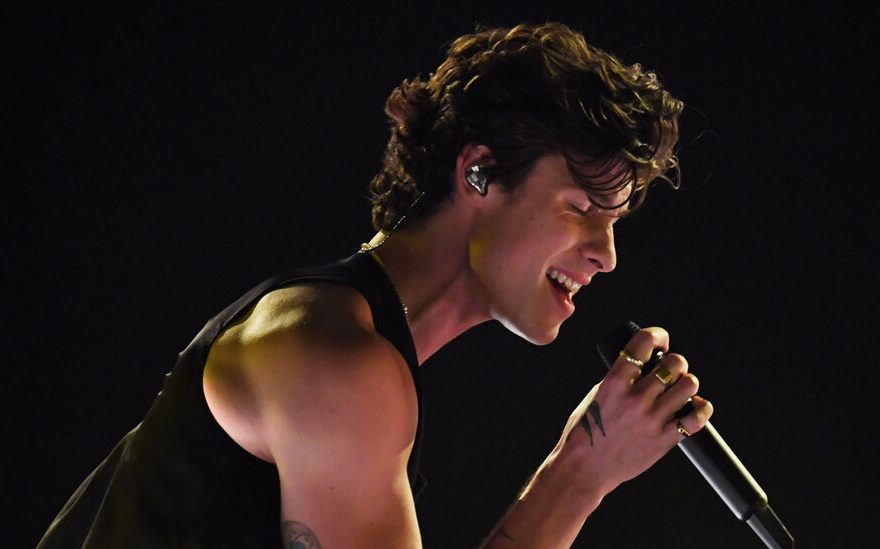 It’s amazing that more English-speaking pop songwriters haven’t latched on to Tainy, the Puerto Rican producer behind globe-spanning hits by Bad Bunny, Selena Gomez, J Balvin and many others. Tainy puts a reggaeton beat, bachata-tinged guitar syncopations and deep sustained bass lines behind Shawn Mendes as he croons short, breathy, calculated phrases about a remembered season of sensual delights. The title has completely freed itself from the 1960s. JON PARELES

The Rolling Stones, ‘Living in the Heart of Love’

Sure, it’s a leftover, and it’s obvious why it was shelved. “Living in the Heart of Love” is a vault track to be released on an expanded 40th-anniversary reissue of “Tattoo You,” something to promote when the Stones tour this fall (with Steve Jordan substituting for Charlie Watts on drums). The song is an obvious “Brown Sugar” knockoff, with Mick Jagger striking an uncommonly conciliatory pose as he woos someone: “I’ll play dirty, I’ll play clean/But I’ll be damned if I’ll be mean,” he contends. (Really?) It’s second- or third-tier Stones, and it nearly falls apart halfway through, but the way the band keeps charging ahead is more than enough fun. PARELES

Parquet Courts are back with a vibrant ode to New York City — and a chronicle of a busy mind traversing its streets. “Treasure the crowds that once made me act so annoyed,” Andrew Savage sings on the first single from the band’s forthcoming album, “Sympathy for Life,” “Sometimes I wonder how long till I’m a face in one.” As ever, his observations are peppered with the robotic banalities of modern existence (“pick out a movie, a sandwich from a screen”), but the song’s snaking groove, persistent beat and shout-along chorus are all teeming with life. LINDSAY ZOLADZ

Lily Konigsberg is a member of the freewheeling art-rock trio Palberta, but over the past few years she’s also been releasing a steady stream of eclectic-yet-infectious solo material on Bandcamp and SoundCloud. (A compilation of that work, titled “The Best of Lily Konigsberg Right Now,” arrived earlier this year.) “That’s the Way I Like It,” from her forthcoming solo debut “Lily We Need to Talk Now,” is smoother around the edges than Palberta’s spiky grooves, but it’s still got ample personality to spare. “That’s the way I like it, you can’t do anything about it,” Konigsberg intones with a sugary defiance, addressing someone who’s been disrespecting her boundaries. As far as assertions of selfhood go, this one’s particularly catchy. ZOLADZ

Haley Fohr’s voice has an entrancing power. As Circuit des Yeux, she composes haunting atmospheres that augment its force. “Dogma,” the first offering from her sixth album, “-io” pulls the listener along with a steady, hypnotic beat, overtop of which her shape-shifting vocals move from a low drone to a keening croon with remarkable ease. “Tell me how to see the light,” she sings, as if yearning for salvation, but at other moments in the song she sounds like an eerily commanding cult leader. ZOLADZ

Cimafunk puts a heavy dash of classic Afro-Cuban rhythm into his throbbing dance music, but he’s also been a longtime fan of American funk, and he recently sought out George Clinton, an idol of his since childhood, for a hang and a recording session. The result is “Funk Aspirin,” a bilingual paean to the healing powers of rhythm, taken at a coolly grooving medium tempo and recorded at Clinton’s Tallahassee, Fla., home studio, where the music video was also shot. GIOVANNI RUSSONELLO

Thinking about Afghanistan this week? Here’s a traditional Afghan melody in modern guise: distorted, multitracked and surrounded in effects, yet still speaking from its home. PARELES

Born in Mexico and now based in New York City, Pieri chant-rap-sings over a cranked-up, swooping synthesizer bass line with ratcheting drum machines at its peaks in “Quien Paga” (“Who Pays”). It’s a brash, assaultive kiss-off with electronic muscle as she multitracks her voice to announce, rightly, “They tell me that I’m pretty, and I also have a flow that kills.” PARELES

For the uninitiated: Welcome to the weird and wonderful world of Alice Longyu Gao, a glitchy hyperpop paradise full of killer hooks and knowing, oddball humor. A D.J. and producer who was born in China and later moved to New York, then Los Angeles, Gao has recently worked with such similarly brash kindred spirits as Alice Glass and 100 gecs’ Dylan Brady (who produced her deliriously fun 2020 single “Rich Bitch Juice”). “Kanpai” — “cheers” in Chinese, Japanese and Korean — is a total sugar rush, blending the pop excess of Rina Sawayama with the electro-freneticism of Sophie. “My name on your lips like liquor lipstick, everybody’s talking about me,” Gao intones, a semi-absurd but self-evident declaration from someone who’s clearly already a global superstar in her own mind. ZOLADZ

The taciturn electronic musician who records as Topdown Dialectic previews “Vol. 3,” an album due in October, with “B1,” a rhythm-forward track that surrounds a roboticized samba beat with sporadic cross-rhythms and chords that bubble up from below, then vanish before leading anywhere. It’s simultaneously propulsive and evasive. PARELES

Maggie Rose, ‘For Your Consideration’

On her third album, “Have a Seat,” the Nashville-based songwriter Maggie Rose seeks reconciliation and balance: between friends, between lovers, between ideologies. She recorded, like Aretha Franklin and Otis Redding, at Fame Studios in Muscle Shoals, Ala., with session musicians rooted in soul. The slow-rolling “For Your Consideration” chides a judgmental companion — “Doesn’t mean it’s all my fault ’cause you say it’s so,” she observes — but also, in a swelling chorus, announces, “I wish that I could borrow your eyes/Maybe that would open my mind.” She’s only calling for fairness, not domination. PARELES

The meter, mostly, is a syncopated and eccentric 5/4, though it shifts at whim; the attitude is terse and businesslike, but sisterly. The Irish-born, England-based songwriter Orla Gartland, 26, an online presence for more than a decade, dispenses advice in “Things That I’ve Learned” on her long-burgeoning debut album, “Woman on the Internet.” She warns against consumerism, comparisons and artificial peer pressure; she gradually stacks up electric guitar riffs and then breaks them down to a little percussion and a lone, undaunted voice. PARELES

Starting on the night of his 32nd birthday, not long before his flare-like career would come to an abrupt end, the trumpeter Lee Morgan played a three-day engagement at the Lighthouse Cafe in Hermosa Beach, Calif. A live album drawn from these performances became the last LP released during Morgan’s life; its four lengthy tracks are part of the jazz canon. But there was plenty more where those came from, and on Friday Blue Note Records released a mammoth box containing the full recordings: a dozen separate live sets, performed over the course of three nights. It’s dizzying to hear how little the quintet flags, knowing it was playing four sets a night; the unrepentant tension and synced-up control that made “Live at the Lighthouse” a classic is maintained basically throughout the boxed set. A nearly 20-minute version of “Absolutions,” a perilously seesawing, skittering tune written by the group’s bassist, Jymie Merritt, opened the original album. This newly released take, from Set 2 of Night 1, lasts even longer. As Morgan, the tenor saxophonist Bennie Maupin and the pianist Harold Mabern each take lengthy solos, Mickey Roker’s cross-stitched drumming keeps the friction high. RUSSONELLO