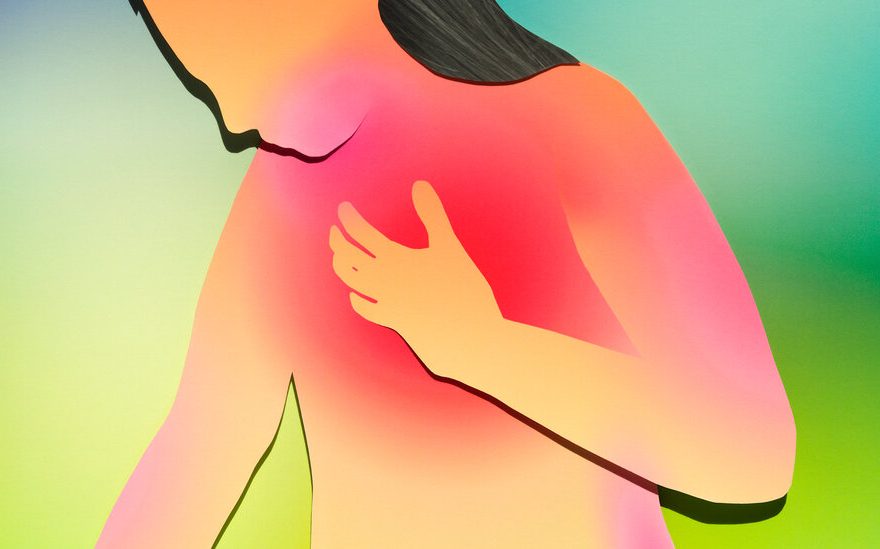 The 47-year-old woman lay in bed, exhausted and in pain. Her longtime partner lay next to her, anxious to do anything to help her feel better. Suddenly her right leg jerked and jumped as if possessed by some demon spirit — the movement was fast and erratic and lasted less than five seconds. “What was that?” her partner asked, amazed and worried. Then it happened again. And again.

The previous two weeks had been full of bizarre symptoms like this. It started, the woman thought, after she finished a 20-mile run. She was training for a marathon, and the long run felt great. The next day, though, she had an odd tightness in her chest. Her mother died of heart disease just a few years earlier, and she wondered anxiously if this was the first sign that it was in her future as well. She took some ibuprofen, and the tightness eased.

The next day she felt achy, as if she might be coming down with something. The day after that she had a headache. A couple of days later her jaw started to hurt so bad that it was hard to eat.

Then the chest pain came back with a vengeance. It hurt to move, even to breathe. She called her primary-care doctor’s office and was told to go to the emergency room. That was the first of several visits to the tiny hospital in her rural Wisconsin community, an hour outside Madison. The visit, like the others that followed, involved lots of tests but no answers. An EKG and chest X-ray were normal, but her white-blood-cell count was elevated — a finding that suggested she might have an infection. She was tested for Lyme disease and, because Lyme is common in southern Wisconsin, was started on doxycycline even before the results came back. And for a day or two the woman thought the antibiotic might be helping. But then the strange symptoms started again. She had pain in her jaw, in her back, in her arm, down her leg. She was tired and sometimes weak, feverish and sometimes sweaty.

Two weeks after that 20-mile run, she was taking a walk with her partner when, after a half-mile, she had to stop and rest. Her legs were so weak and painful that she barely made it home. Most days, she was exhausted by afternoon. Napping — once rare — was now needed daily. She had been healthy all her life, and now this?

In Search of Abnormal Test Results

Dr. Masaru Furukawa, her regular doctor, was fully booked, so she went to see his physician assistant, Maria Denu. The patient described the fevers and these strange neurological symptoms — numbness in her jaw, pain and weakness in her legs. To Denu, that combination suggested a tick-borne disease. Moreover, the patient worked in an outdoor theater and so spent much of her day in tick territory. She said she’d never found a tick, but they are hard to see. Her Lyme test was negative, but it’s not the only disease that ticks carry. Denu sent off blood to look for some of the other tick-borne infections, as well as signs of inflammation and rheumatological diseases.

It was the next day when the patient had the scary episode of leg-jerking. She called Denu, who discussed this new symptom with Furukawa. The patient needed to see a neurologist, he told her. Denu referred the patient to one. She also started the woman on a different antibiotic to treat the possible tick-borne illness and gave her a new medication for what sounded like neurological pain.

Nothing helped. Her jaw ached. Her back ached. Pain shot down her legs. She couldn’t eat; she could barely sleep. She lost 20 pounds in these two and a half weeks. She went back to the emergency room again. No one had an answer. Finally, she got in to see her primary-care doctor. Furukawa saw that she was thinner and that she was using a cane, and he was worried. He sent her for more tests. She had been sick for three weeks by then; surely something had to show up to give them clues about where to look. They had run so many tests and gotten so little information out of them. It was frustrating, but he had to keep looking because she was clearly getting worse.

Finally, the lab tests revealed an abnormality: Her liver enzymes were high — three to four times the normal level — and her red-blood-cell count was low. And among the red blood cells, a few were very abnormal. When Furukawa saw these results, he repeated the tests — just to make sure the abnormalities were real. He was shocked by the results. In the four days between the two sets of tests, everything had become much worse. Clearly this disease was moving faster than they were. She needed to be in a hospital, but he worried that the small hospital in town wouldn’t have the experts needed for something as unusual as this woman’s disease. Instead, he sent her an hour away to Meriter Hospital in Madison.

It was late afternoon by the time Dr. Jeremy Jaskunas, who was assigned to her care, first met the patient. She brought a diary detailing the symptoms of the past few weeks, along with a huge stack of results from all her emergency-room and lab visits. He set those aside to hear her tell her story of random pains, weakness and fevers. He was struck by the swiftness with which this patient had been transformed from an athlete training for a marathon to someone so weak and debilitated that she had to use a walker in the days before she came to the hospital. On exam, her heart was racing and her arms and legs were weak and tender.

Although the patient now had many abnormal lab results, the most striking were still those from the liver, which, over the course of a few days, went from nearly normal to more than 20 times the normal value. Jaskunas ordered an ultrasound and then an M.R.I. of the liver. The imaging revealed a shadow that darkened much of the liver’s uniform gray. It could be from an infection, the radiologist reported, but it was most likely some form of cancer.

Even before Dr. Saurabh Rajguru, an oncologist, met the patient, he had a good idea of what she might have. The abnormal red blood cells told him that something was wrong in her bone marrow, where blood is made. And an M.R.I. of her brain showed abnormalities there, so it had to be a disease that could spread throughout the body. And finally, there were very few diseases that could move as fast as this one had. She probably had a type of lymphoma, Rajguru explained to the patient and her partner. It was frightening to hear these words said out loud, but to the anxious couple, it was a relief to finally be able to put a name to what she’d been through these past few weeks.

Lymphomas are cancers of the lymph nodes, Rajguru explained. They usually cause painless enlargement of these collections of white blood cells. There are many types of lymphomas, depending on which kind of cell is involved and how rapidly these now abnormal cells reproduce. Diagnosis is usually made by testing tissue from the abnormal lymph nodes, but in her case, they were all hidden deep inside her abdomen. The next step would have to be a bone-marrow biopsy, Rajguru said. And if that didn’t give them an answer, she would need a liver biopsy.

The next morning the patient was taken to an operating room. She lay on her stomach with drapes covering most of her body, leaving only a patch at the top of her buttocks exposed. After numbing the region, a radiologist inserted a large needle into her pelvic bone. It didn’t hurt, the patient told me, but the pressure was intense.

She got her answer later that day. She had Burkitt lymphoma, a disease most frequently seen in children. It is one of the most rapidly growing tumors known, with a tumor-cell-doubling time of 25 hours. In oncology, Rajguru told me, it is said that a doctor must never let the sun set on a suspected case of Burkitt. The patient started treatment with chemotherapy the next day.

That was two years ago. Chemo was tough, but now she feels nearly back to normal. She did a half marathon in May and a 10K last month.

Lisa Sanders, M.D., is a contributing writer for the magazine. Her latest book is “Diagnosis: Solving the Most Baffling Medical Mysteries.” If you have a solved case to share with Dr. Sanders, write her at Lisa [email protected]