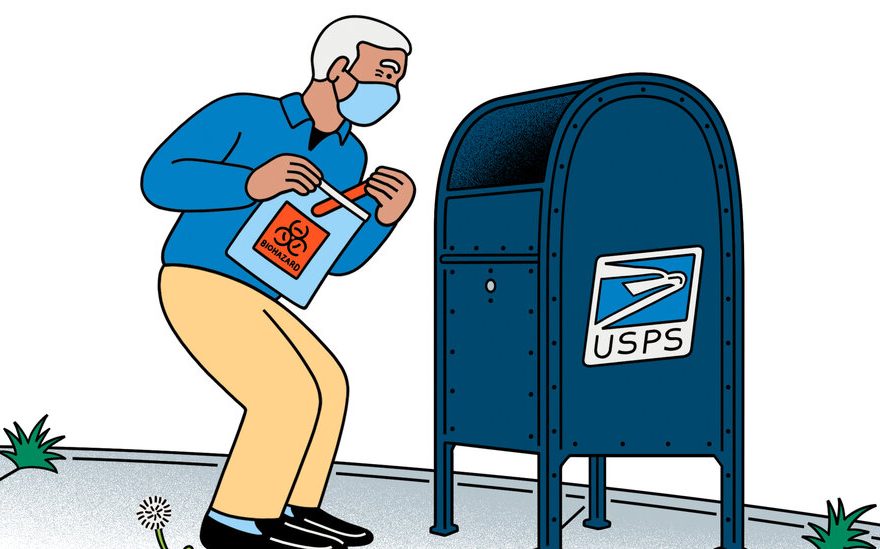 I am fortunate enough to work for a large and successful company that’s riding out the pandemic without too many problems. Unusually for a corporation of its size, it appears to really care about its employees’ well-being, or at least it makes an effort.

To this end, the company is offering free weekly Covid-19 tests to employees who can’t work remotely because of their particular job function: e.g., R. & D. or package handling. I’m authorized to work in the office, and therefore considered part of this group. But I can and do work exclusively from home. Still, my status means the company offers me tests, to be self-administered and mailed in from home. (I’m in my 50s and in good health, and though I have a few mild risk factors, I am not in a medically at-risk population.)

I’m pondering two questions. The first is, although the Covid tests are not mandatory, the company strongly encourages signing up for them. Access is explicitly not contingent on work location, only on job category. Still, because I’m self-isolating pretty diligently, would I be accessing tests under false pretenses?

My second concern is this: Though my company has the resources, both financially and logistically, to secure enough tests for its employees, I fear I’m taking advantage of that capability, especially when there is a shortage of tests nationwide. I know that there’s little chance my personal test would be redirected to someone who needs it more if I don’t take it. But on the other hand, is it ethically appropriate for me to forgo testing in the absence of a compelling personal need?

I am well aware that this is a very privileged question springing from an absurdly privileged situation, but that doesn’t excuse me from trying to do the right thing. Name Withheld

In an ideal world — or simply a better governed America — you wouldn’t have to think about this question; tests wouldn’t be a scarce resource. Of course, there would still be a question about waste even if we were a country like Denmark, where, at the height of the pandemic, more than 50,000 people a day — out of a population of nearly six million — got tested. (Adjusting for population size, that’s the equivalent of nearly three million a day here; twice our actual maximum.) But as you’re aware, the waste you’re worrying about is, as the lawyers say, “de minimis.” The marginal cost to your company, and the marginal effect on our overall testing program, aren’t significant.

The interesting question is what the upside would be of your being tested regularly, given that you’re isolated and presumably adhering to the recommended precautions. To think about this, we must consider the accuracy of the tests. Assuming we’re talking about PCR tests, the false positive rate is extremely low. (When these happen, it’s typically because the specimens were mishandled in the lab.) By contrast, the false negative rate is significant, especially during the first week after infection. (These are typically due to the fact that the virus isn’t yet present in the sample in detectable quantities.) Are these test results useful to someone who, like you, has a very low baseline risk of infection?

Not very. Because you’re isolating and not working in the office, you don’t need to worry about the risk you pose to co-workers. On the other hand, a negative result could unduly increase your confidence that you’re in the clear. Suppose you have a 5 percent chance of contracting the virus. (A reasonable estimate would be way lower, but let’s simplify the arithmetic.) According to a study in the Annals of Internal Medicine, the probability of a false negative PCR result is 100 percent on the first day of infection and decreases to 20 percent by the eighth day. But estimates of false negatives vary widely; let’s simplify and say your false negative rate is going to be 30 percent, and that your false positive rate is zero. Bayes’s theorem shows that a negative test result should increase your confidence that you’re uninfected by about 3.5 percent — which is reassuring, but not in a life-changing way.

So why bother availing yourself of the test? Well, there are other factors to consider. One is that if your employer has the data for all the workers in your group, in the office and out, it can make better decisions. Having an overall picture of the rate of infection tells them something about patterns of employee behavior. If people pull out because they think they’re behaving well, that’ll skew the data. It could be best, given the concerns of data-driven management, if everyone complies.

My wife and I live in a beautiful community in the South Carolina Lowcountry that, unfortunately, uses the word “plantation” in its name. Knowing how offensive this word is, and the hurt it causes islanders of color (e.g., the Gullah Geechee people), we joined a group of residents formed to convince the governing board to replace the word “plantation” in the community’s name with something else. Ultimately, our efforts were unsuccessful. More than 52 percent of respondents voted to keep the name as is.

Words to Know About Testing

Confused by the terms about coronavirus testing? Let us help: