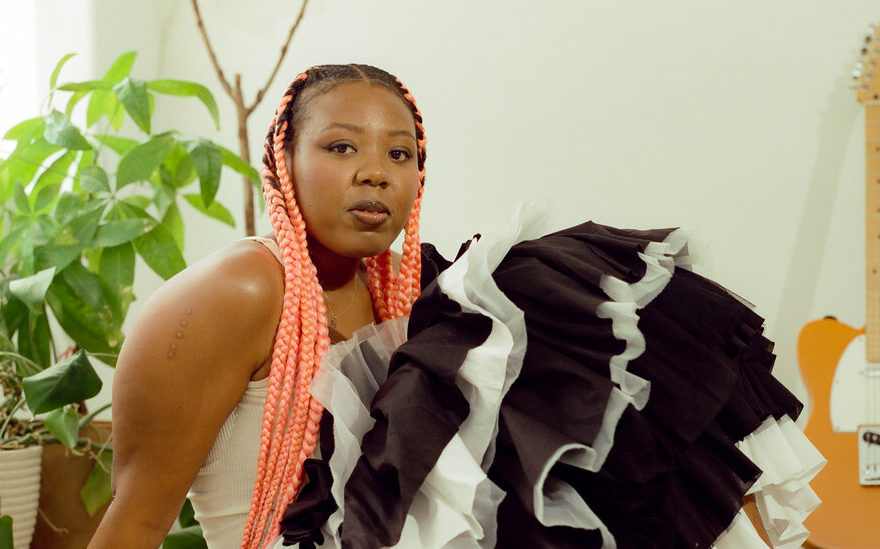 The polyphonic artist finds ways to enjoy the harrowing business of putting herself, or versions of it, on display.

Martine Syms, a Los Angeles-based artist, puts her avatars through a lot — including autofictional videos on view at three U.S. institutions, and a feature-length film about her graduate-school days at Bard.Credit…Simone Niamani Thompson for The New York Times

LOS ANGELES — As self-portraits go, the video “DED” by Martine Syms is a bit masochistic. The artist’s digital avatar strolls across a flat, featureless limbo, enduring several gruesome deaths. Seppuku with a chef’s knife. Crippling, fatal allergies. Diarrhea so explosive she rockets into the sky like a rag doll, then dies from the fall. Then, somehow, she gets up and keeps walking.

Syms remembers sending an early clip of the 15-minute piece to a friend. “I still think it’s kind of funny,” she said recently, at a booth at Little Dom’s, a red-sauce, dark wood Italian restaurant in this city’s Los Feliz neighborhood. “But let me be clear that I understand how people do not. They were like, ‘What the [expletive] is this? It’s really violent. I don’t like seeing you dying.’”

But that’s the thing, she told me. “There’s always a level of seriousness read into a lot of things that I’m doing that I don’t necessarily connect with.”

Especially when race is involved. “I’m using a signifier, Blackness, which for some people can connote serious pain,” she acknowledged. “But I see it as a real space of joy and freedom.”

Syms, 34, is the sort of “new media” artist who antiquates the term. Since her days as a film programmer at clubs like the Echo Park Film Center in Los Angeles, she has turned the various lenses of media around to interrogate what society expects of Black women, and Black artists in particular. An early video, “My Only Idol Is Reality,” from 2007, consists of a degraded VHS copy of a heated, unedited dialogue on race between two contestants on “The Real World.” Syms studied cinema at the Art Institute of Chicago, co-founded a book store called Golden Age and started an artist-book imprint called Dominica. She racked up tags: artist, writer, musician, publisher, teacher, filmmaker; D.J., influencer, brand. Throughout her art, her moving images feature avatars of herself that she endows with a vital mixture of ego and exhaustion, cupidity and love. 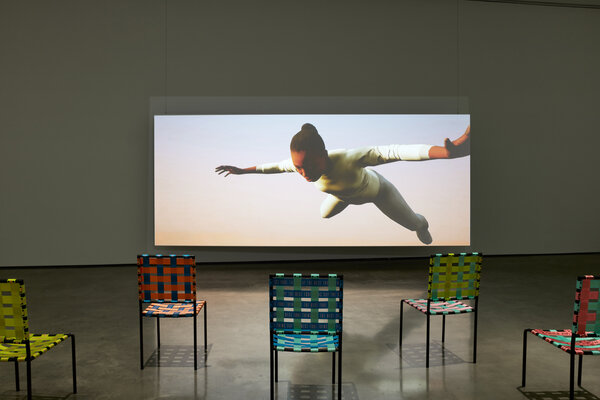 In the summer of 2017, Syms graduated with an M.F.A. from Bard College; that fall, she began a year as faculty at the California Institute of the Arts. In the interim, she produced a solo show at MoMA — a purple-tinged installation including photographs, furniture and a feature-length video.

This fall brings her a triad of institutional coups, and a movie in theaters. Each stars dramatized, extrapolated versions of Syms. A new, open-ended video play fed by machine-learning algorithms anchors “Neural Swamp,” through Oct. 30, at the Philadelphia Museum of Art. And a gonzo sitcom called “She Mad,” 2015-2021, in which Syms often stars, appears at the Museum of Contemporary Art Chicago until February 2023. The most recent episode routes the artist’s real-life ups and downs through a cover of the “Life Story” TikToks posted by the rapper Lil Nas X.

Syms’s many avatars are a record of survival in a cloying media atmosphere. They’re sometimes self-indulgent — necessarily so, in the manner of psychoanalysis or self-care. The notion of “Grio College,” a place that teaches the trick of honing personal experience into modern stories, developed through the artist’s experience on the M.F.A. track. Syms writes in the press notes to “The African Desperate” that the overlapping dystopias of an advanced art college in the bucolic Hudson Valley came laced with racism. One of the last sequences of the film layers found audio of a man telling off his bigoted co-workers with shots of postcard-perfect fields and shops in Troy, N.Y.

“The curriculum that she presents is larger than what a college typically covers,” said Lauren Cornell, the chief curator at the Hessel. “It encompasses one’s whole life, friends, thinkers, culture.” Her professors and gallerists become collaborators; the places she lives become sets and settings.

Sitting in the booth at Little Dom’s, on the edge of Hollywood, dayglo-orange braids fell across Syms’s lilac tank top and accented a tattoo on her shoulder: the word “EVIL.” (Seen from a certain angle, it almost reads “LIVE.”) Waitstaff in the hall zapped small flies with loud pops of an electric racquet.

Syms grew up in Altadena, a quiet town abutting the mountains east of Los Angeles known as a retreat for roughneck millionaires and an enclave for the Black middle class. Her mother worked as a registered nurse at the Kaiser Permanente hospital on Sunset Boulevard, and Syms would take the bus into Los Angeles to spend afternoons browsing Goodwill and Skylight Books or watching films at the vintage theaters. The kinetic harshness of the city comes through in her work. Her characters take the bus; they walk in Los Angeles.

But virtual registers are just as important for Syms and her versions. In some of her videos, characters’ texts pop up on the screen in bubbles; her 2018 piece “Mythiccbeing” is an interactive chatbot. Throughout our conversation, she mustered text messages, voice memos and notes from her phone, piecing together how ideas coalesced into art. Her style of hyperlinking in real time matches the hybrid way she works, reifying, refining and recollecting the thoughts that make a person up.

Syms traces “DED” to a dream she had in early 2020, while she was sick with Covid; it is stored in an audio file that she doesn’t remember recording. The title of the 2021 show in which that work debuted, “Loot Sweets,” derives from another reverie. She pulls up her notes app: “post ap life in a weird mall. bard people and others. lauren and i are trying to escape. people are looting so we stop by pleats please on the way out. everything is gone. all the good stuff at least. lauren drops from the second floor into the ocean while i crawl down to meet her. she swims w me bc she’s stronger against the current. we finally get out and i’m immediately shot dead.”

It’s heavy stuff, a nightmare fed by civil unrest incited by police killing unarmed Black Americans, against the background simmer of a global pandemic. Syms explained the chain of associations behind the phrase “Loot Sweets”: medieval lute music, Bobby McFerrin’s cover of the Beatles’ “Blackbird,” reparations. While artists and activists have called for ending the exploitation of images of Black death, Syms turned to gallows humor.

But Syms is mining the vein of absurdity, hidden in plain sight, running through freewheeling experiments in Black culture like Amiri Baraka’s poetry or Sun Ra’s jazz. In 2013, she wrote “The Mundane Afrofuturist Manifesto,” which deflates Afrofuturist esoterica and other escapism. Instead, she proposes: “The chastening but hopefully enlivening effect of imagining a world without fantasy bolt-holes: no portals to the Egyptian kingdoms, no deep dives to Drexciya, no flying Africans to whisk us off to the Promised Land.”

The curator Meg Onli, who included Syms in the 2019 exhibition “Colored People Time” at the Institute of Contemporary Art in Philadelphia, told me that the text underpinned the show’s take on “the confluence of temporalities, Blackness and the mundane.”

“I love her ability to pivot from conversations around Black futurity that center on the fantastic and spectacular,” Onli added, “and remind us that our future may not look drastically different from our present.”

Syms pointed out that Teeny, her avatar in “DED,” doesn’t really die. The back of Teeny’s white sweatshirt reads TO HELL WITH MY SUFFERING in all caps. Call it a koan to contain the ambivalence of enjoying an often-awful world.

At the Philadelphia Museum of Art, the glowing green installation of “Neural Swamp” mounts two women’s faces on monitors, arranged around vinyl poufs. A third screen flashes with footage from rounds of vintage video game golf. The score and performances are constantly revised in real time: Digitized actors recite a script that Syms wrote but an algorithm updates constantly into an amalgamation of sitcom clichés and tongues.

Formally, “Neural Swamp” resembles the Chicago install, and both recall another Syms production: her design for a Prada-sponsored supper club in Hollywood during this year’s Frieze Los Angeles art fair. Her vision for what she called “Prada Mode,” branded “HelLA World,” included “every last detail, from the lecture series to the matchbooks,” Donahue said. Her name on the restaurant’s marquee, DMs from guests crawling around long screens in the dining room, closed-circuit videos of the crowd on monitors hung from the bare studs between the restaurant, the outside bar — “It was a Martine Syms waking dream scene.”

Maybe it’s a metaphor, too: There are stanchions, there are walls, but sometimes you can walk through them. Maybe it’s simply that, in a world prone to displays of despair, Syms’s fluorescent way of coping draws a crowd.

I asked Syms why, given her dynamic range, she still works as a gallery artist. “I feel a great deal of freedom, you know?” Only in the art world, she said, are your most unqualified hunches met with such serious support. She told me about an event at the Zentrum Paul Klee residency in Bern, Switzerland, where, in lieu of showing slides of old work, she asked the organizers to serve a purple cocktail at the bar. Not only did they agree, a mixologist spent hours beforehand helping her perfect the drink’s taste and color.

“If I told somebody I want to run Little Dom’s for a month as an art project,” said Syms, “I probably could.”