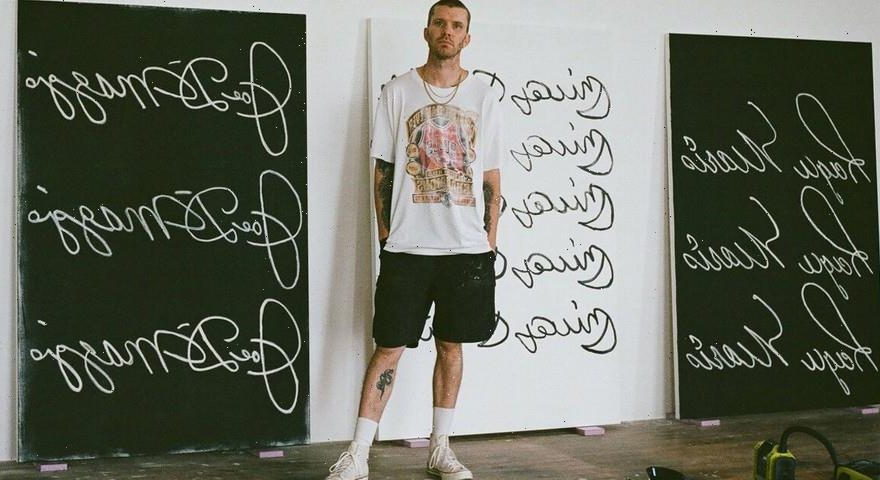 Stems Gallery in Brussels will unveil a new solo exhibition by artist, Tyrrell Winston. “Family Values” explores the false promises of suburban America — the gated, orderly lifestyle that the artist describes as a “silly little nightmare.”

Having grown up in Orange County and now living in New York City, Winston endlessly searches the streets for all sorts of discarded material — cigarette butts, tarps, paraphernalia, and most notably, flattened basketballs — which are resurrected across a number of elaborate sculptural work that has featured in galleries such as Detroit’s Library Street Collective to Stockholm’s Gallery Steinsland Berliner. The artist first gravitated towards this sourcing method as he found himself in $150,000 USD of student debt, upon graduating Wagner College with an arts administration degree. He knew, inherently, that he wanted to be an artist but did not have the funds necessary to buy the often-expensive materials required to carry a studio practice.

Fast forward to the pandemic, Winston was forced to pivot his practice within the studio, as opposed to spending more time gathering on the streets. It was a “refreshing change of pace,” states the artist in an interview with Hypebeast. “It allowed me to start a series of Punishment Paintings, that are athletes/celebrities autographs repeated. They’re rooted in art history (nods to Cy Twombly and John Baldessari). There is something equally spectacular and tragic about contemporary mythological figures. And over the last 18 or so months, I’ve had ample time to dive into the myths of American celebrity,” the artist added.

The title of the show, “Family Values” is a tongue-and-cheek reference to the tour of the same name from the late ’90s and early 2000s. Founded by metal group, Korn, Family Values featured the likes of Ice Cube and Limp Bizkit to Method Man and more. Winston’s iteration harks to the feeling many have while growing up in the ‘burbs — a longing for a life that is not so mundane and cookie cutter. “It somersaults and cartwheels between dreams and nightmares. It is both suburban and metropolitan. It’s a full-circle moment for my work, as so much of the work that I have been making is outwardly referential to the city, I’m now going back to my roots per se,” states the artist.

Tyrrell Winston‘s “Family Values” will view at Stems Gallery from September 9 to October 5.

Elsewhere in art, Destination Crenshaw is a new cultural center that will enrich the South Los Angeles community.