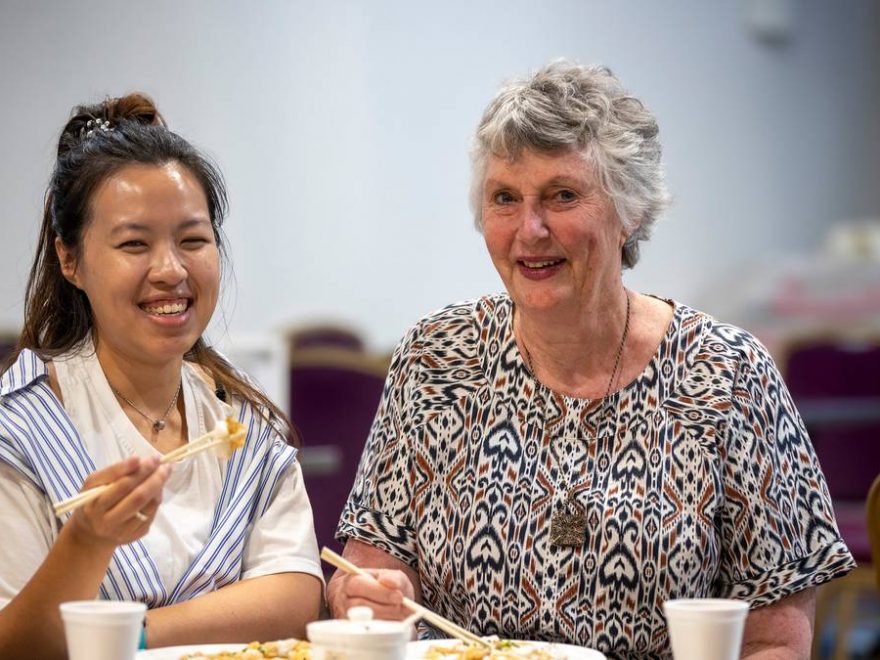 A plate of freshly steamed rice noodle rolls with complimentary black tea from a self-service station at this Panmure eatery costs $3.30 – cheaper than a long black at Starbucks.

The rice noodle roll dish – zhu chang fen, also known as chee cheong fan – is a staple for breakfast and brunch across many parts of China, Hong Kong, Taiwan, Malaysia and Singapore.

At Yans Brothers Food Station in Auckland, the dish is made fresh on demand and priced at between $3.30 and $5 depending on the choice of filling, which ranges from barbecue pork, prawns, egg to chicken.

Angus Yan, co-owner of the eatery, who hails from Southern China, says his family has been making zhu chang fen for years.

He initially declined to be interviewed, saying he was happy to keep his food outlet in a little alleyway in Jellicoe Court off the main street as Panmure’s “little secret”.

“We don’t make much profit from the chang fen, we just want to offer customers a chance to enjoy freshly steamed ones like how we have it in Asia,” Yan said.

“It’s become our signature dish and most people who know about us will order this, but we don’t really want to advertise it so we can keep the number of orders manageable.”

In Cantonese cuisine rice noodle rolls are served as part of yum char, and according to Yan the style served at the eatery was what you would find on the streets of Guangzhou.

The family’s main business is the production of dumplings, bao buns and other Asian food stuff at their factory in Otahuhu, Yan said.

The food station in Panmure opened just over two years ago mainly as a retail outlet for the food products.

After receiving an order, Yan would ladle rice flour mix onto the steamer tray and add the filling of choice and spring onions.

The tray then goes into the steamer for a couple of minutes, and when it’s ready, he uses a wide spatula to roll the rice flour sheet, which is chopped, plated and served with soy sauce.

Janice Lam, a retail manager from Albany, found out about the eatery from a WhatsApp chat group and has been a regular for the past year or so.

Originally from Singapore, Lam says she would drive 30km from her home a couple of times every month for her “chee cheong fan fix”.

“Dollar for dollar it’s probably what you would pay in Singapore, but by New Zealand standards, this is I think the cheapest meal you can find here,” Lam said.

Katie Chan from the Panmure Business Association says the dish takes her back to her growing-up years in Hong Kong.

“In the morning we see this everywhere along the streets in Hong Kong, and it’s what I had for breakfast so often,” Chan said.

The association is planning several initiatives, including a food festival and food tours, with the aim of turning Panmure into a foodie destination for “cheap and authentic” food.

There are now more than 40 eateries in the eastern suburb, double the number of 15 years ago.

“Here, we don’t have ‘Chinese’ food, but restaurants with dishes from individual provinces of China, like Yunnan Kitchen or the Guangzhou experience at Yans Brothers Food Station.”

Sutton estimated there were more than 25 ethnic dining options in Panmure, ranging from Chinese to South African, Malaysian to German, Sri Lankan to Tongan.