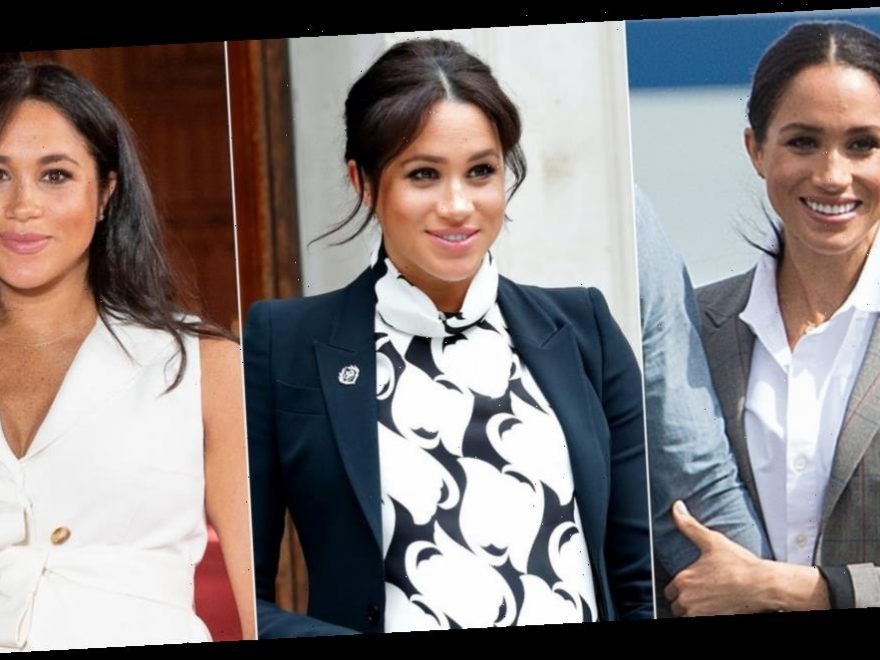 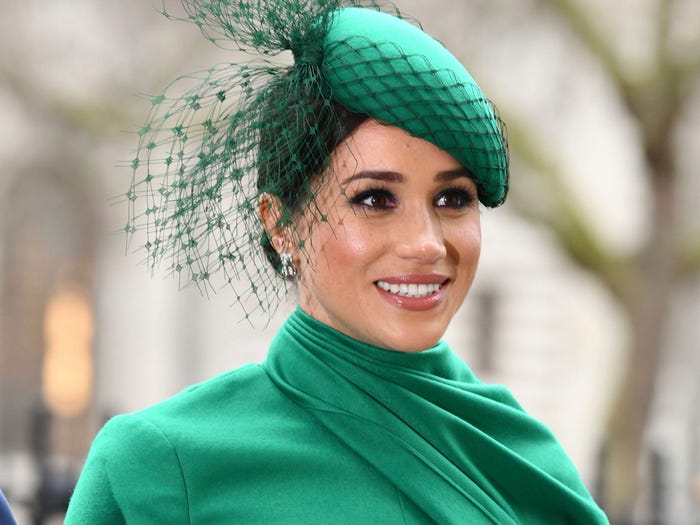 In 2018, Markle was photographed wearing jeans from Outland, a sustainable Australian brand that employs former victims of sex trafficking. 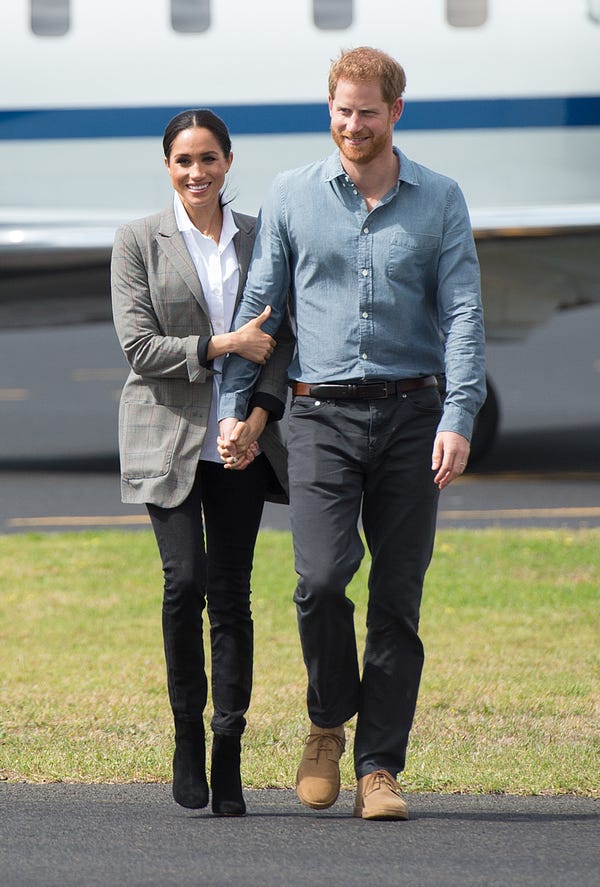 During her royal tour of Australia in 2018, Meghan Markle was pictured wearing black jeans from Outland, a brand that employs women who have been victims of sex trafficking. The brand specializes in crafting sustainable denim while also training their employees to learn a craft, James Bartle told ABC Gold Coast.

After Markle wore the jeans, Bartle said the brand saw an uptick in sales and the women that made the jeans were proud to see the duchess wearing them.

"For them to come from what they've come from to creating this product for Meghan Markle… that's just out of this world," he said.

According to the brand's website, the profits from Markle wearing the $195 Harriet jeans allowed Outland to hire 46 more seamstresses and promote some of their existing staff.

In 2019, Markle spoke at an International Women's Day panel wearing a printed dress in Suffragette white.

To attend a panel discussion at King's College, Markle dressed in a monochromatic Reiss dress with a black blazer and matching heels.

The pops of white in Markle's outfit were thought to be a nod to the Suffragette movement, as reported by Elle.

According to CR Fashion Book, Emmeline Pethick-Lawrence is credited with making white the color synonymous with the Suffragette movement in 1908. Other colors worn during the movement included purple, green, and gold.

International Women's Day celebrates the "social, economic, cultural and political achievements of women" and "also marks a call to action for accelerating gender parity," according to the organization's official website.

To introduce baby Archie to the world in 2019, Markle wore a white tuxedo dress from biracial designer Grace Wales Bonner. 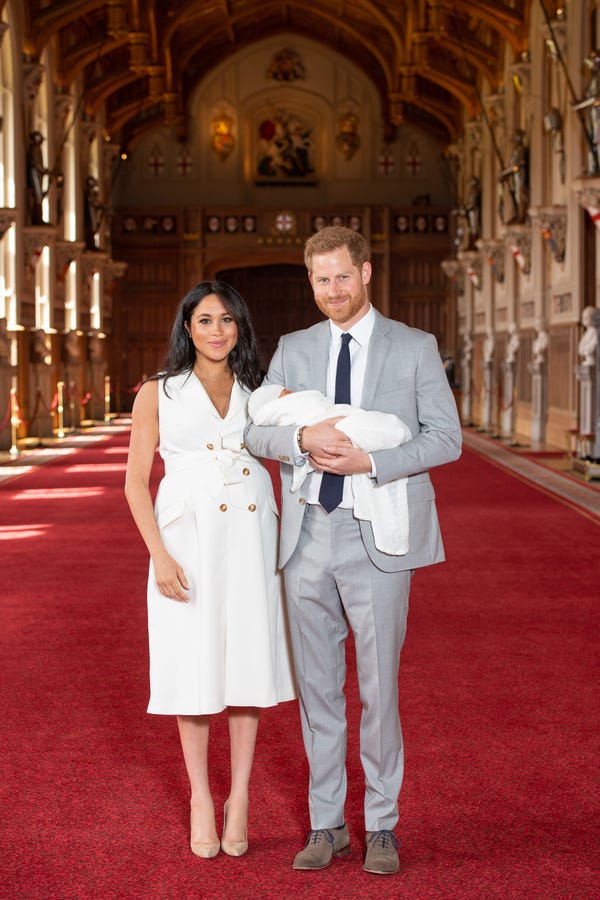 Markle's Wales Bonner dress represented a way for her to celebrate her biracial identity — and that of Archie — as the brand's designer, Grace Wales Bonner, is also biracial. Bonner was born in south London to a white mother and Jamaican father, and she incorporates European and Afro-Atlantic ideas into her line.

This was also an opportunity for Markle to highlight a rising star in the British fashion scene. Bonner won the LVMH Prize for Young Fashion Designers in 2016 and was also awarded the British Fashion Council/Vogue Designer Fashion Fund prize in 2019.

On International Women's Day this year, Markle wore clothing from female designers to surprise a group of students at the Robert Clack Upper School in London. 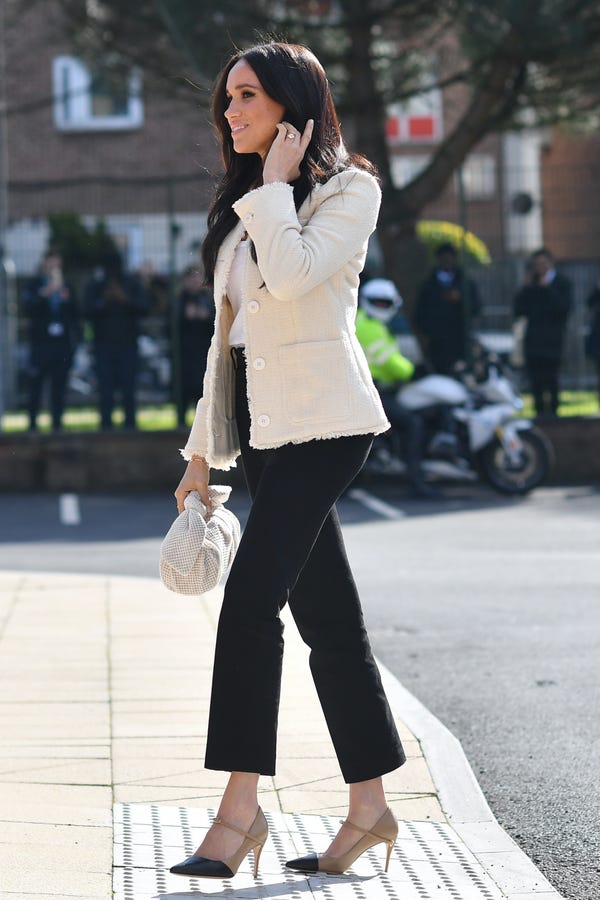 To speak at an assembly about empowering women in March, Markle's outfit was a head-to-toe nod to female entrepreneurs.

Her blazer is from UK designer Clare Hornby's label ME+EM, which was founded in 2009.

Markle's two-toned pumps are from Jennifer Chamandi, a British shoe designer of Lebanese origin. Before launching her first line in 2018, Chamandi was a senior banker and then enrolled in the UK's Footwear Summer School to learn how to design shoes.

Markle's handbag is from South Korean designer Rejina Pyo, whose sustainability-centric brand is based in London.

The white top the duchess wore is from Lavender Hill, a sustainable fashion brand founded by Isobel Ridley in 2013.

In April, Markle wore a $175 evil-eye necklace that is said to symbolize protection against "negative vibes." 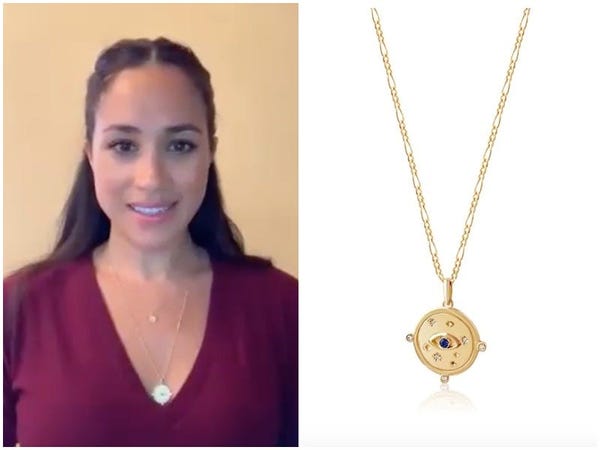 While on a video call for Smart Works, a charity that Markle was the patron of prior to stepping back from official royal duties, the duchess wore a Visionary Charm necklace from Edge of Ember that retails for $175.

The necklace was sold out at the time of writing.

According to the product description, the jewelry piece was designed with a blue topaz evil eye that "protects its wearer from negative vibes."

Considering Markle has been a target of unfair criticism from tabloids and news sites — before, during, and after her time as a working royal — it makes sense that she may have knowingly worn an accessory that's said to protect her from negativity.

In October, Markle honored the late Supreme Court Justice Ruth Bader Ginsburg with a T-shirt and a face mask embroidered with the justice's famous quote: "When there are nine." 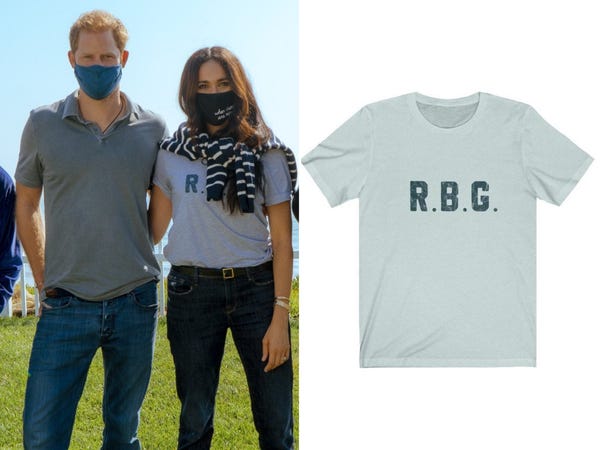 For her first joint podcast appearance with Prince Harry on an episode of "Teenager Therapy," which aired on October 10, Markle paid tribute to the late Supreme Court Justice Ruth Bader Ginsburg with her outfit.

The duchess wore a $24.95 light-blue T-shirt with the letters "R.B.G." printed on the front. The same T-shirt was still available to purchase on Etsy at the time of writing.

She paired her outfit with a $14 cloth face mask that had the words "When there are nine" embroidered on it, which was another nod to Ginsburg, who said the now-famous phrase during a 2015 interview at Georgetown University.

"People ask me sometimes, 'When do you think it will be enough? When will there be enough women on the court?' And my answer is: 'When there are nine,'" Ginsburg said.

Since stepping down from official royal duties, Markle has spoken openly about social issues like feminism and encouraged Americans to be civically engaged, which are subjects that the late Supreme Court justice also championed throughout her career.

For a virtual event with Fortune magazine in October, Markle wore a printed maxi dress from Black-owned brand Tracy Reese. 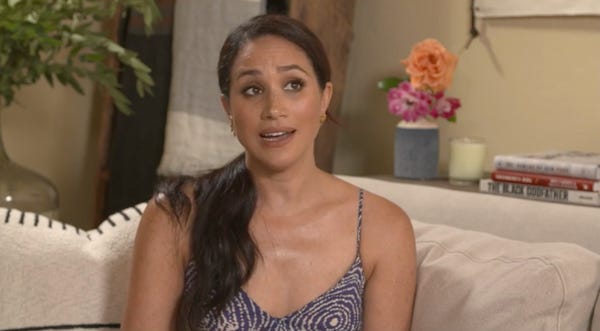 While speaking at a virtual event hosted by Fortune, Markle supported a designer of color by wearing a dress from Tracey Reese, a Black-owned fashion brand.

Markle's dress also represented her support for brands that focus on sustainable efforts — as the piece was from the brand's Hope for Flowers line, which includes clothes made from sustainable fabrics.

The exact dress from the line wasn't available at the time of writing, but a similar striped version was available for $328. A percentage of proceeds from profits of the line are donated to Detroit Dirt, a nonprofit organization that works with American corporations to lower carbon emissions.