Prime Minister Scott Morrison insists he is not worried by the comprehensive election defeat the Liberals have suffered in South Australia, although a senior minister says there are lessons for the looming federal poll.

But Labor has pointed to the Prime Minister as being a drag on the state Liberals and is hopeful some of the swings in South Australia can be replicated federally. 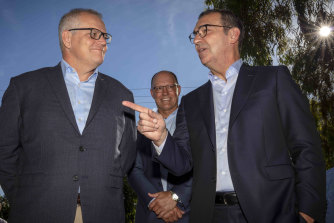 On Saturday night Steven Marshall’s state government became the first incumbent to lose an election during the pandemic.

The Liberals had 23 seats going into the election but were on track to hold just 13 as counting continued on Sunday. Labor was ahead in 28 of 47 lower-house seats, with six independents ahead in other electorates.

Mr Marshall announced on Sunday he would step down as Liberal leader after nine years in the role. “While I am disappointed by the election outcome, I take full responsibility for the result and accept the will of the people,” he said.

He was hopeful of retaining his own seat of Dunstan, although he trailed Labor’s Cressida O’Hanlon by about 150 votes on Sunday evening. Pre-poll and postal votes were yet to be counted.

The Prime Minister also paid tribute to Mr Marshall, “my dear friend … who has been an outstanding premier”, and the entrepreneurial spirit he had brought to boosting the South Australian economy.

“I also want to thank him for the very positive and constructive role he played around the national cabinet table during the course of the pandemic,” Mr Morrison said.

Finance Minister Simon Birmingham, the most senior South Australian on the federal Liberal team, said history would probably be kinder to Mr Marshall than voters had been.

“But clearly today is a deeply disappointing day for the Liberal family in SA to have that result,” he told ABC’s Insiders.

He said Labor’s campaign – focused largely on health and hospital funding – had been effective if at times misleading, and there would be lessons for the federal election in terms of strategy, tactics and “ensuring that we define the questions for voters going into the campaign”.

“Our election was always going to be a challenging one and I don’t think we’ve ever underestimated the challenges that lie ahead,” he said when asked if the SA results made him more nervous for the federal campaign.

The federal election is due to be held by late-May. 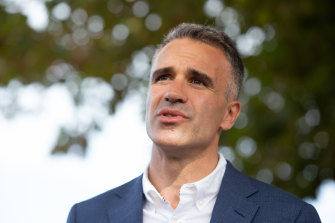 Labor linked Mr Marshall and Mr Morrison in its campaign material, particularly in the final weeks, and sources within the party said the Prime Minister’s unpopularity played a role in the victory.

Opposition Senate Leader Penny Wong told Nine she had seen numbers suggesting one in two South Australians were less likely to vote Liberal when they were reminded Mr Marshall and Mr Morrison were from the same party.

“There was a reason we had, you know, a lot of signage on the electoral booths with Scott Morrison on it,” she said.

Mr Morrison pointed out that even Mr Malinauskas had said before election day that the campaign was being fought on state issues.

“The federal election will be fought on federal issues,” he said. “And what I know is that Anthony Albanese, he’s not Peter Malinauskas … he’s not Annastacia Palaszczuk. He’s none of these other premiers. He’s the federal Labor leader.”

Senator Wong said the themes of the campaign in her home state were broadly similar to those the party was pursuing at the federal level.

“It’s a positive result for us federally,” she said. “It’s positive, but we’ve got a long way to go when it comes to seats here in South Australia. We know it’s going to be really tough fight.”

The Liberals’ third most marginal electorate at the federal level is Boothby in Adelaide’s southern suburbs. Nicolle Flint held the seat in 2019 with a 1.4-point margin, but she is retiring at the next election.

The state electorates that overlap Boothby all swung towards Labor, with shifts of between 6.7 and 14 points.

The neighbouring federal electorate of Sturt is held by James Stevens with a 6.9-point margin, which the Australian Electoral Commission classes as fairly safe. It is the next narrowest margin for the Liberals in SA.

Sturt overlaps with Dunstan, where Mr Marshall suffered an eight-point swing, and Bragg, where former deputy premier Vicki Chapman had a 10-point swing against her. The lowest swing towards Labor in the area was 4.2 points in Torrens, which had a Labor incumbent.