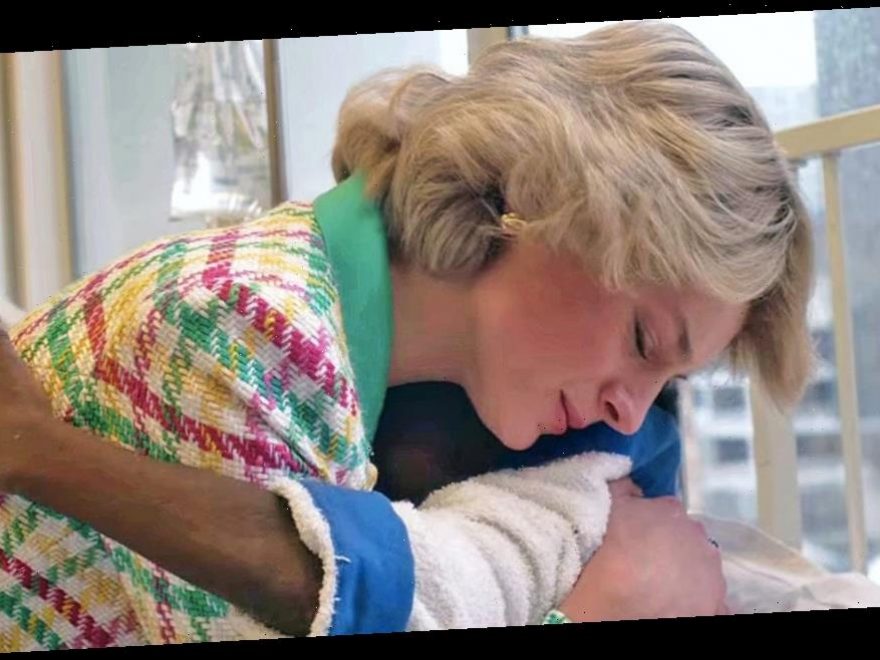 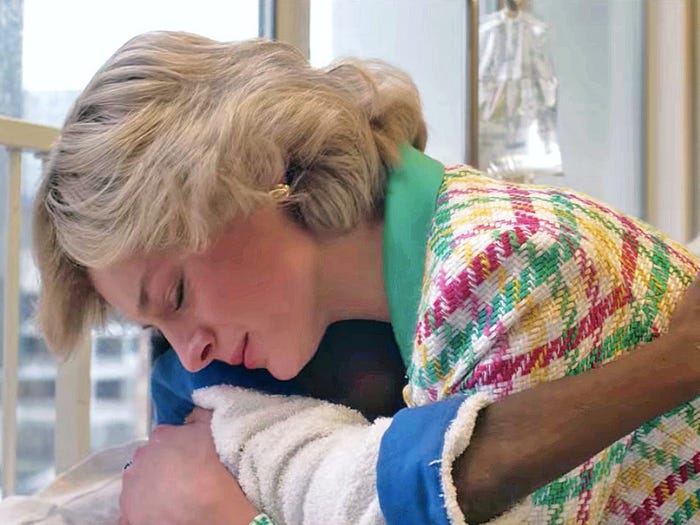 The trip — specifically her visit to Harlem Hospital's pediatric AIDS unit — would be a pivotal moment for the 27-year-old, both in the episode and in real life.

As Insider's Melissa Wiley wrote, the trip was key in "cementing her reputation as a compassionate and modern royal," and the brief but touching encounter captured in the episode shows why Princess Diana was such a royal icon.

In episode 10, "War", Diana, played by Emma Corrin, is taken on a tour of Harlem Hospital's pediatric AIDS unit. She walks through aisles of beds, where babies and children are attached to IVs. She stops and reaches down to hug a little boy.

While small details, like the color of the boy's pajamas, have changed, the story is true.

The hug, which happened at a time when people incorrectly believed HIV and AIDS could be spread by casual contact, captured the entire world's attention in 1989.

Diana's small gesture would have rippling effects on her continued work at destigmatizing HIV and AIDS, and the moment solidified Diana's reputation as the "people's princess."

Diana embarked on the trip to New York in 1989, when misinformation was rampant about the HIV/AIDS

The princess's first solo trip was designed so Diana could prove herself to be "a woman of substance, as well as a woman of style," according to "Beneath The Crown," a companion series launched by Netflix about the real-life events that take place in the show.

American media predicted the trip would be spent shopping in New York City's high-end stores. Instead, Diana met a range of people, from millionaires to those experiencing homelessness — her only shopping was at FAO Schwarz to promote British toys, according to a The New York Times article from 1989.

Perhaps what shocked people the most, though, was her trip to Harlem Hospital.

In the episode, Diana gets a tour of the pediatric AIDs unit. A doctor explains to Diana that many of the children in the AIDS unit are foster children in need of care and a family. When Diana asks why, the doctor answers, "because of the stigma — the fear of the disease."

In the mid-1980s, the AIDS pandemic was spreading, and misinformation and rumors quickly followed. One of the most common myths was that AIDS could be spread by casual contact, like a hug or handshake.

In both the episode and real-life, Diana disproved the myth by hugging a little boy.

But he wasn't the only person Diana hugged, touched, and cuddled with.

According to a 1989 article in the Los Angles Times, the princess also stroked and complimented a 23-month-old's "pink frilly dress" and held hands with an 11-month-old infant.

According to "Beneath The Crown," Diana's hospital visit helped break down AIDS-related stigmas and led to a surge in adoption requests for HIV-positive children.

At the time, Dr. Margaret Heagarty, pediatric director at Harlem Hospital told Diana, ''Your presence here and in Great Britain has shown that folks with this disease can be hugged, can be cared for.''

The embrace is said to have angered royals, but the public loved her for doing what others had not

In the episode of "The Crown", Charles, played by Josh O'Connor, raged about the headlines Diana had generated.

"Grandstanding like that … you think we couldn't do that too? Theatrically hug the wretched and the dispossessed and cover ourselves in glory on the front pages?" the character said in the episode.

How Charles reacted in real-life is impossible to know for sure, but Diana's public advocacy is said to have upset the royal family. Reports indicate that the Queen was unhappy with Diana's chosen cause and reportedly urged Diana to do "something more pleasant," according to a 2008 BBC interview with Diana's bodyguard, Ken Wharfe.

While Charles was upset about the headlines in the show, people across the world were mesmerized.

In the episode, a fictional news anchor interviews a handful of people.

"We love her. She's beautiful. She's warm," one person says.

The message rang true in real life, as well.

ABC at the time reported that Diana's "dazzling smile and personality … won over New Yorkers."

Diana had already made headlines for her HIV/AIDS advocacy

In "The Crown" episode, which doesn't depict any of Diana's previous AIDS and HIV work, Diana comes off uninformed and unaware about HIV and AIDS.

But that was far from the truth, and, by 1989, Diana had made HIV and AIDS an issue she was passionate about.

Her advocacy work started two years prior to her New York trip, where she made headlines for a simple, yet monumental, handshake.

In 1987, Diana was invited to London's Middlesex Hospital to open the first AIDS and HIV ward in the UK, according to Time.

During the visit, Diana refused to wear gloves when she shook the hands of patients with AIDS.

One patient gave Diana and the press permission to photograph their handshake, and the event made headlines around the world.

A nurse present at Diana's historic original visit told the BBC, "if a royal was allowed to go in and shake a patient's hands, somebody at the bus stop or the supermarket could do the same. That really educated people."

According to Time, Diana had been nervous about making such a public statement but "unhesitatingly agreed to do it."

Throughout the visit, Diana shook hands with 12 AIDS patients. While those 12 people would be the first, they would be far from the last.

For the next decade, Diana would continue to advocate on the behalf of people with HIV and AIDS

The princess continued to use her platform to destigmatize HIV and AIDS and dispel myths.

From Rio de Janeiro, Brazil, to Toronto, Canada, the princess visited with patients suffering from AIDS.

Outside of visiting wards, Diana donated to the cause and attended fundraising events centered on helping fight the HIV and AIDS pandemic.

"HIV does not make people dangerous to know, so you can shake their hands and give them a hug," she said at the Children and AIDS Conference in April 1991. "Heaven knows they need it."

After Princess Diana passed, her son, Prince Harry, would continue his mother's efforts in education and demystifying HIV and AIDS.

"She felt a responsibility to shine her spotlight on the people and issues that were often ignored. She knew that AIDS was one of the things that many wanted to ignore and seemed like a hopeless challenge," Prince Harry said in a 2017 speech. "She knew that the misunderstanding of this relatively new disease was creating a dangerous situation when mixed with homophobia."

"In our opinion, Diana was the foremost ambassador for AIDS awareness on the planet and no one can fill her shoes in terms of the work she did," Gavin Hart of the National AIDS Trust said to BBC when the princess died.