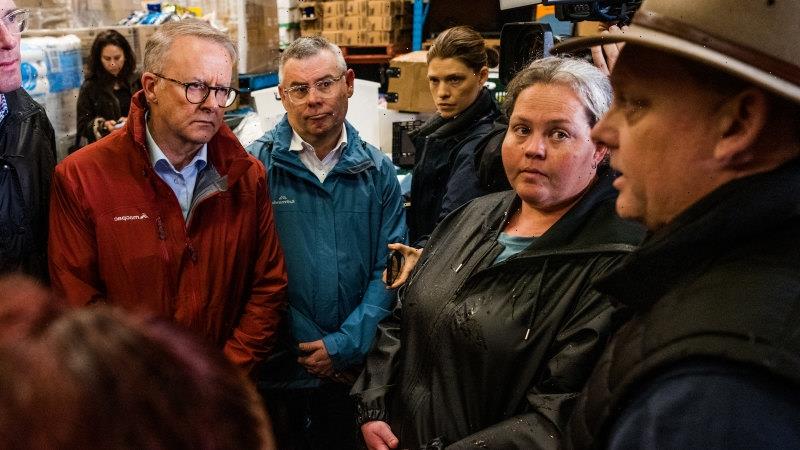 The key to national leadership in an emergency is simple. You must turn up.

Every prime minister has known it since at least Harold Holt. Holt, on an official visit to New Zealand, hurried to Tasmania to survey the ruins and speak to the victims of the Black Tuesday bushfires of 1967, declaring “I had to come to see it for myself”. 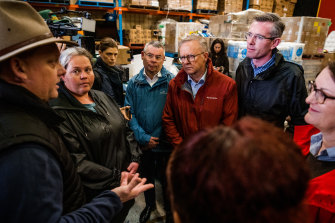 Having streaked across the globe from a communications blackout within a European war, he shrugged off jet lag and waded into the flooded world lapping at Sydney’s borders the day after he landed back in Australia, standing with NSW Premier Dominic Perrottet to hear the frustration and pain of victims, their hopes drowned for the fourth time in 18 months.

Albanese – having given a press conference in Perth on Tuesday on his way home from Kyiv in Ukraine – headed to outer-Sydney flood zones first thing on Wednesday morning.

He announced emergency payments of $1000 to every adult in 23 local government areas already declared national disaster zones and $400 for every child. It was, he claimed, the fastest such response to a disaster on record. 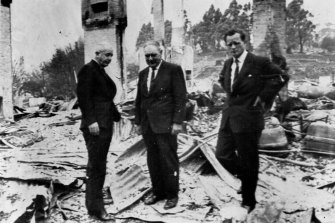 Prime minister Harold Holt cut short a New Zealand trip to fly to Tasmania in 1967: “I had to come to see it for myself.”Credit:Fairfax Library

Mostly, he took care to quietly listen to locals expressing their frustration and to share the floor with Perrottet, whose state is sharing the cost of the disaster payments.

Conceit can sink a leader at a time like this.

Albanese had no need to mention the effort of former PM Scott Morrison who arrived at the calamitous flood zone of Lismore, northern NSW, nine days after water had swept away lives, houses, businesses and livestock while locals initially had to rely on their own resources to survive.

Legacies are made within such times. Morrison had already given himself a slogan to suffer beneath when, during the 2019-2020 bushfire catastrophe, he tried to excuse his absence by declaring “I don’t hold a hose”. 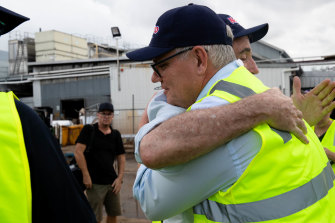 Former prime minister Scott Morrison got a hug at the end of his factory tour in South Lismore, March 9, 2022. Credit:Janie Barrett

But when they show up, they can usually expect a measure of regard, just as Holt did all those years ago.

His tour of Tasmania’s bushfire areas was hailed in The Sydney Morning Herald as having “come to symbolise the concern and affection felt by all Australians for Tasmania”.

Similar sentiments were reported when prime minister Gough Whitlam broke into a trip to Europe and flew to Darwin within days of Cyclone Tracy, which had all but wiped out the northern city. 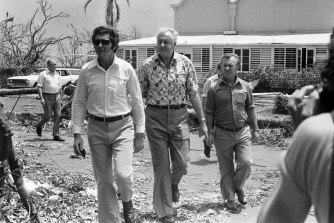 “One of the duties of a prime minister is to make symbolic demonstrations of the public will,” The Age reported approvingly of his “frantic flight” back to Australia. Such praise dropped away after Whitlam resumed his European trip several days later.

The Sydney Morning Herald praised Fraser for having “resumed his role as leader of the country, rather than that of a political party”. The humanisation of Fraser proved too late. He lost the subsequent election.

John Howard’s most empathetic days followed disaster. He took opposition leader Kim Beazley to Tasmania to mourn the victims of the Port Arthur massacre in April 1996, receiving almost universal acclaim for the gesture. 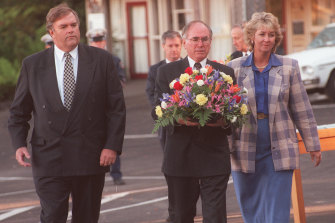 When Canberra was hit by a fierce and destructive firestorm in 2003, Howard interrupted his annual holiday and hurried to meet victims of the disaster, where he spoke of “the particular affinity between a prime minister and the city of Canberra as the national capital”.

Prime minister Julia Gillard’s parliamentary address following floods and cyclones during 2010-11 was considered one of her most important and moving speeches. (She had been criticised for appearing wooden during earlier tours of disaster zones that summer.)

“They are not just names on a list,” she said. “They were someone’s brother, sister, grandparent or child. No insurance payout is going to fill that.”

Prime minister Tony Abbott won respect for fighting fires with his local fire brigade, and for his furious, emotional response to the shooting down of a Malaysian Airlines airliner over Ukraine, which killed 38 Australians. It remains a high point of his leadership. 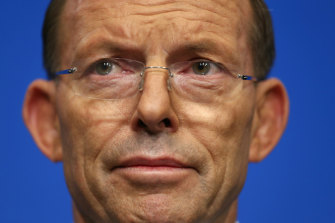 Tony Abbott’s bloodshot eyes betrayed the sleepless nights in the week after the MH17 plane was shot down over Ukraine on July 17, 2014. Credit:Alex Ellinghausen

Now, it is Albanese’s turn.

And despite efforts of senior Coalition figures David Littleproud and Angus Taylor to equate his trip to Ukraine with Scott Morrison’s holiday in Hawaii, Albanese has proved he at least knows the most fundamental requirement of leaders.

Sadly, he will likely have other opportunities to be tested on his role as consoler-in-chief.