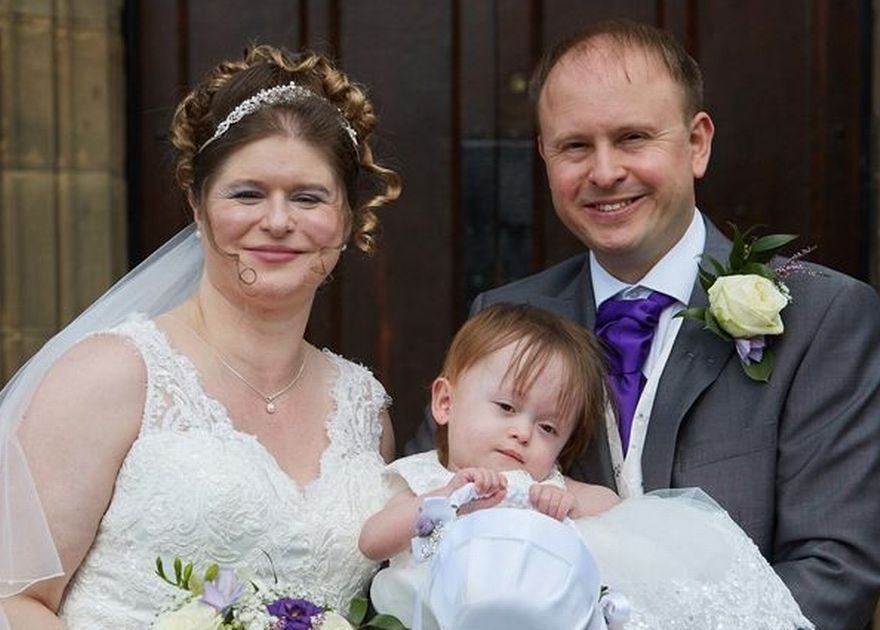 A seriously ill baby defied doctors' expectations and watched as her mum and dad tied the knot.

When Evie was five-weeks-old she became critically ill and her parents were told to prepare for the worst.

Vicky and Martin Carter postponed their wedding day after they were warned their little girl may not live to see them walk down the aisle.

The tot, one, suffers from several serious conditions that affect her bowels and bladder and has undergone a number of operations.

She has undergone treatment at the Royal Manchester Children's Hospital while her parents have been staying at nearby accommodation provided by a charity since May.

It is the third time they've been looked after by the Ronald McDonald House, having spent six months there after Evie was born.

But incredibly, Evie pulled through and on Saturday joined her mum and dad in celebrating their wedding day, the Manchester Evening News reports.

It was the first time in almost 13 weeks that Evie had been well enough to leave hospital.

Vicky got ready at Ronald McDonald House – which is just across the road from RMCH – while one of her bridesmaids and nursing staff helped Evie into her dress on the ward.

One of the nurses even did the bridal party's make-up.

They were then picked up at by the wedding cars and taken to St Paul's Church in Stalybridge, Greater Manchester, for the ceremony.

"It was an incredible day," Vicky, from Stalybridge in Tameside, said.

Evie was an IVF baby and Vicky and Martin, both 39, had been planning their big day before she discovered she was pregnant.

The English and music teacher's pregnancy was full of complications and she gave birth to her daughter 11 weeks early after going into premature labour while out Christmas tree shopping in November 2017.

"We had planned to get married over August Bank Holiday last year (2018), but when Evie was about five-weeks she became seriously ill with a condition called Necrotising Enterocolitis and we were sat down by three surgeons who told us that we should probably begin to say our goodbyes.

"They didn't expect her to last a couple of hours but she did.

"We knew it was touch-and-go for a few months after that and that's when we should have been organising things.

"We decided to postpone – if Evie didn't pull through we didn't want to have to think about sorting wedding stuff, and if she did then we needed to focus on her, not planning a wedding."