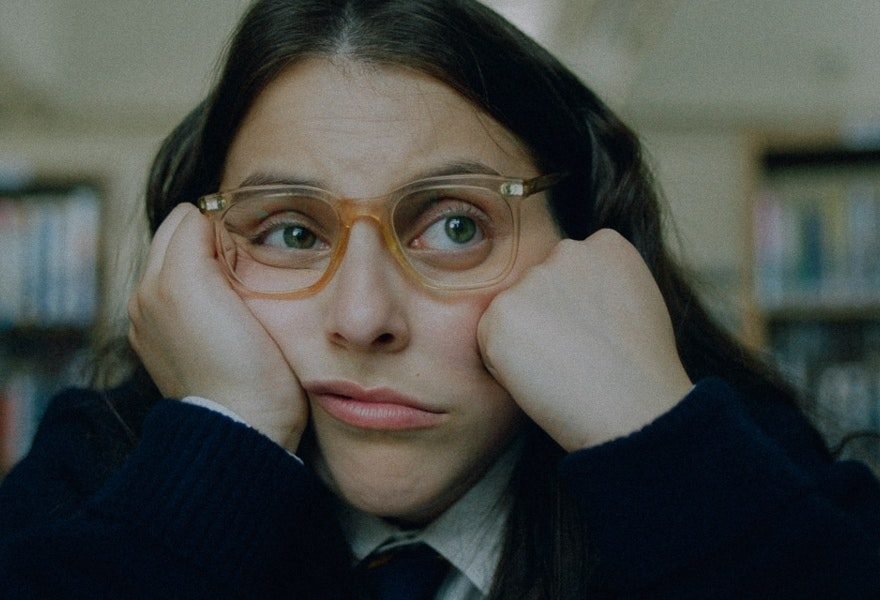 In her upcoming new movie, How to Build a Girl, Beanie Feldstein essentially plays two characters: Johanna Morrigan, a bubbly teen from a working class family in Wolverhampton, England, and Dolly Wilde, Johanna’s rock n’ roll-obsessed, top-hat-wearing, journalistic alter ego, who proudly wields her reputation (and, at one point, an engraved trophy) for being the biggest "asshole" in the music criticism business. Based on Caitlin Moran’s 2014 semi-autobiographical novel of the same name, the comedy (which doesn’t have a theatrical release date yet) gives Johanna the space to try on different identities. While the character comes to regret some of her choices, Feldstein loves that Johanna is still so keen on the idea of reinvention.

"I feel like [reinvention] is such a privilege that often, as women, we aren’t granted," Feldstein says, speaking over the phone after the movie’s Toronto International Film Festival premiere. (Incidentally, it also won the festival’s FIPRESCI​ Prize for Special Presentations.) "Caitlin extends a hand to women and is like, ‘I will hold you up. I will pull you up, just try it.’ And that is such a gift, I think."

Like her protagonist, who lands a gig at a music magazine at the age of 16 by virtue of her talent and her persistence (no, Johanna has to insist to the hipster men who form the rest of the staff, her review of the Annie soundtrack was not a joke), Moran also found notoriety and an audience early in life. By the age of 18, she was already a published novelist, rock critic, newspaper columnist, and TV presenter. You don’t have to look much further than How to Build a Girl to get a sense of the chaos that visibility can bring into an adolescent’s existence. But Johanna’s story, in the end, is all about self-reflection and forward motion. In other words: try new things. It’s OK if they don’t work out.

"You get the sense in the beginning that [Johanna] wants to level up," Feldstein says. "She wants to be pushed out of this bubble of her childhood and really grow, and I think we all feel that at points in our life."

Johanna has the grand, far-reaching desires of the most optimistic of Disney princesses (though hers also include the opportunity to have sex with as many people as possible). As savvy a writer as she is, she doesn’t know much of the world before she’s thrust out into it. Soon, her reviews are a smash; she’s signing autographs outside of venues, and she’s getting dropped off at her family’s crowded council home at the crack of dawn by grody tour vans. Is it really for her? Johanna has to come out the other side of the experience to find out.

In a recent Refinery29 piece, Moran wrote, "It was only after we got Beanie Feldstein that we realized how f*cked we would have been if we didn’t have Beanie Feldstein." (The actor tells me there were "no words for how moved [she] was" when she read that.) At the same time, there’s a terrific irony to having the 26-year-old veteran of such favorites as Booksmart and Lady Bird, who seems to navigate the industry and fame with such a strong sense of self, play a teen who hasn’t yet decided what kind of girl she wants to build.

"I always say, ‘They either want the Bean or they don’t want the Bean,’" Feldstein said of the pressure to meet the expectations of others in a 2018 interview with her brother Jonah Hill for a ‘zine he created to complement his film, Mid90s. But though Feldstein tells Bustle that she does "feel like someone who is very confident and is very self-assured," playing Johanna was a reminder to "not get too stuck in my ways."

Looking at Feldstein’s upcoming projects, it certainly seems that Johanna made herself heard. The actor will be headlining the Clinton White House season of American Crime Story (due in 2020) as national-punching-bag-turned-feminist-icon Monica Lewinsky, then embarking on a 20-year filmmaking journey with Richard Linklater and her best friend Ben Platt: an adaptation of the Stephen Sondheim musical, Merrily We Roll Along. Forget getting stuck in your ways — try doing something that no one else has even dared to attempt.

"It was really fun for me to embody someone who is just so malleable and so willing to try things out," Feldstein adds of her British teen inspiration. "[Playing Johanna] imprinted on me in a way I don’t even think I understood at the time."