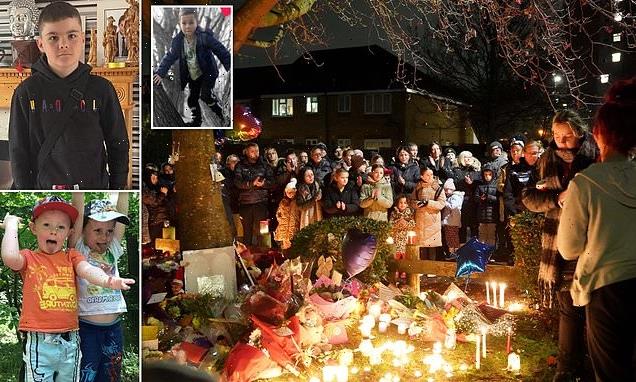 BEL MOONEY: Amid the numbing grief of the ice lake tragedy, there’s one small spark of hope… even in this selfish age, the ancient power of community lives on

There’s a hushed darkness that falls over a community in mourning which the light of day cannot disperse. In a sense, it can never go away.

Even as years pass, the tragedy of the boys in the frozen lake will never be forgotten.

‘Can such a terrible thing have happened here?’ people whisper in Solihull. That thought may perhaps be followed by an unspoken, guilty prayer of gratitude that it was not our child who dared take the fatal steps on to a frozen lake, on a snowy day, not long before Christmas.

Yet the horror, disbelief and sense of loss does, in fact, ‘belong’ to everybody. All of us understand the truth of universal sorrow: every one those silent, ashen-faced people who joined the vigil for the four boys — brothers Finlay and Sam Butler, aged just eight and six, their cousin Thomas Stewart, 11, and ten-year-old Jack Johnson, who tried, so valiantly to help — understands.

The mothers and fathers who took their children (some of them classmates of the boys) to add to the growing shrine of messages and toys in Babbs Mill Park know that when the family in the next street or block is weeping, their grief touches everyone. 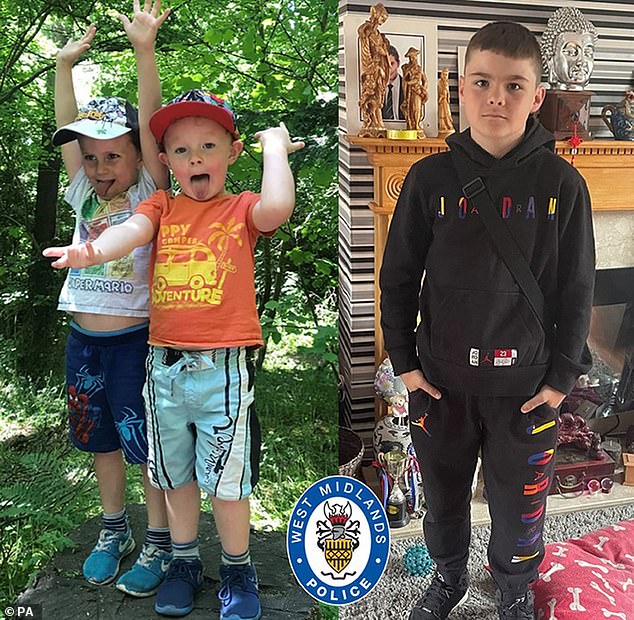 Finlay (left) and Samuel with their cousin Thomas Stewart (right)  have been named as three of the children who died after falling through ice at Babbs Mill Park in Kingshurst, Solihull

No wonder. The ordinary, tight-knit community around Babbs Mill goes back generations; the sort of neighbourhood where kids run in and out of each other’s homes, and Mum’s best friend is called ‘Auntie’.

Kingshurst was one of several council estates built in the years after World War II to accommodate thousands of people living in the bombed-out slums of Birmingham.

It was one of the first to be built, followed by the larger Chelmsley Wood, and now has three primary and two secondary schools, and a population of just over 8,000.

For all those residents, Babbs Mill Park and its lake is a precious oasis, a magnet for local children who may not have gardens. On the television news we saw neighbours weeping, while reporters on the ground at the scene of the tragedy have been overwhelmed by the kindness, the shared sorrow, of local people. 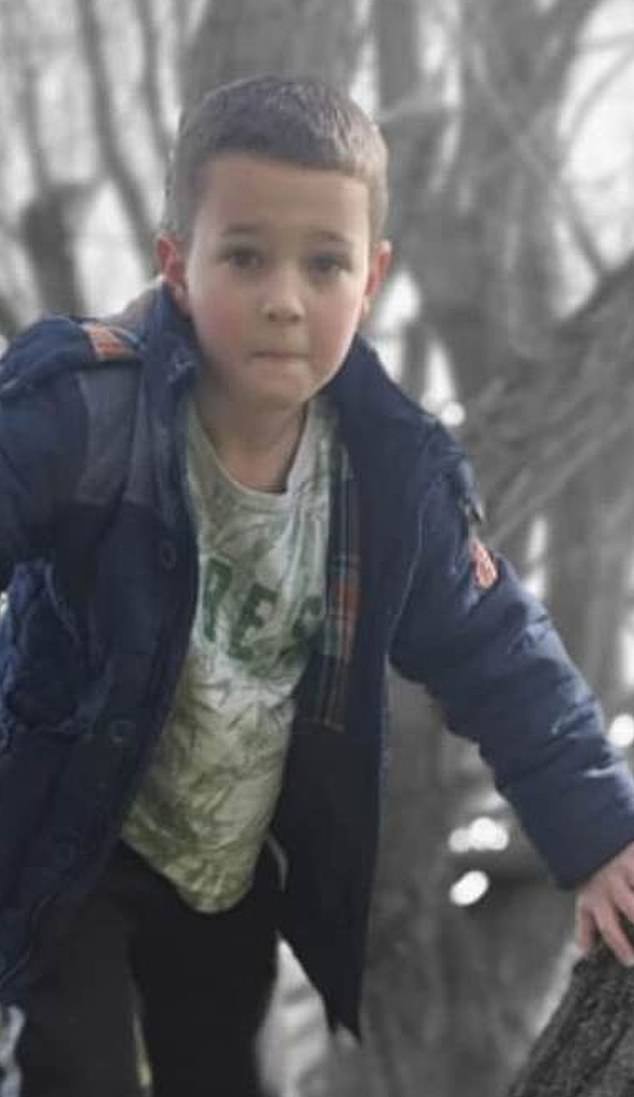 Ten-year-old Jack Johnson was among the boys who lost their lives, with his aunt saying on Facebook that he ‘ran and tried to save’ three other children – aged six, eight and 11 – who had been on the frozen lake when the ice broke

By dusk on that fateful afternoon last Sunday, dozens had gathered on the patch of grass overlooking the lake — just standing silently in the freezing cold, holding hands with their children or friends and taking in the horror of what had just happened.

They stared out across the frozen lake where, under the glare of spotlights, specialist search teams continued to wade into the water, cracking the ice in the search for possibly more bodies.

Behind the fleet of 30 emergency vehicles on the road, in the shadow of dusk, loomed six high-rise blocks and an estate of houses from where those young boys had gone out after lunchtime on Sunday.

It was from one of the blocks that one of the boys’ grandfathers, hearing of the emergency, had sprinted to the water. He was said to have cut his legs as he jumped desperately into the icy lake in a frantic attempt to pull the boys out.

Roofer Dale Hewitt, who the next day brought his baby daughter with him to lay flowers at the boys’ memorial, said: ‘I know the grandad. To think of him running down to save his grandkids is just unbearable. It’s affected everyone around here.’

These days the word ‘heart-breaking’ is used so carelessly, even to refer to a fluffed penalty in a football match. But today Solihull knows the real meaning of heart-break and all the rest of us can do is bow our heads in empathy. 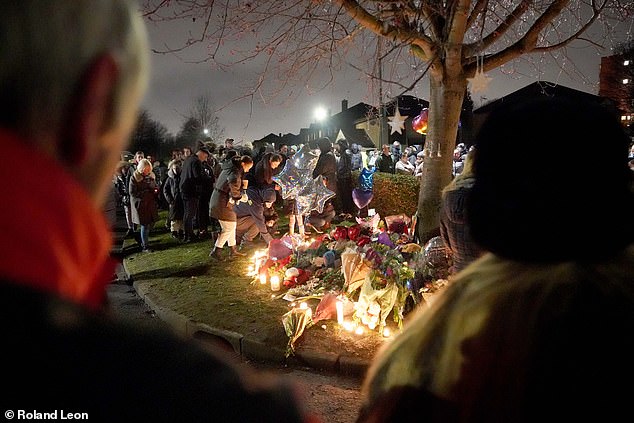 A vigil for the four boys was held following the tragedy at Babbs Mill Park, Lake Kingshurst

You do not have to have been anywhere near there to tremble at the thought of those bereaved parents, who probably have Christmas presents stashed in the wardrobe for children who will never open them.

We start imagining cruel fate putting our own beloved children and grandchildren in unseen danger. The very thought makes you quail. Because, no matter what belief we may hold or none at all, the death of any child calls the pitiless universe into question. No, no, no — it should not happen. But it does.

Inevitably, such a tragic accident brings dire warnings about safely. I saw some comments online which asked: ‘Why were boys that age allowed out to play unsupervised?’ Sometimes you can almost hear an unpleasantly superior tone behind such a question — a tiny hint that children from a poorer area should have been watched more carefully.

Utter nonsense. Children must go out. In fact, it’s more irresponsible not to allow them the freedom to roam, which child development needs.

The boys in Solihull were only doing what children have done not just for decades, but for centuries — taking playful risks, perhaps daring each other, inevitably giggling, maybe feeling afraid but not wanting to show it … oh, who knows?

Were they deliberately courting danger? Of course not — they were just mucking about thoughtlessly, as kids will. And all the warnings in the world will not stop such activity.

Surely most of us can remember parental warnings from our own childhood? Don’t talk to strangers, look both ways crossing the road, never jump off the bus when it’s moving, keep well away from railway lines, don’t play with matches, don’t run with a sharpened pencil . . . be careful, please.

Yet children need space. Every year when the snows fell in Liverpool my big brother and I would go out alone, as working-class children were allowed to do. Nobody thought anything of it.

Wrapped up in gaberdine macs, but quickly losing gloves and getting snow inside our wellies, we stabbed at each other with icicles, pushed each other over lethal ice slides, and chucked vicious balls of compacted snow at young neighbours on the estate, who sent them back, but much harder.

My brother was supposed to be looking after his little sister, but never did, and I never told on him. The secret world of childish wildness always exists far beyond the care of adults. 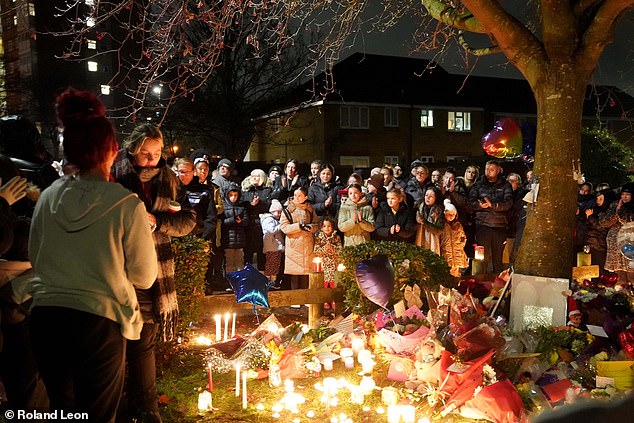 Yet the Babbs Mill tragedy took place when we are more health and safety conscious than at any time in history. In our very recent, painful past children were kept home from school in terror of a virus when there was no real evidence that this was in their best interests. Parents fret about their children’s diets, allergies, obesity, infections, screen time… the list is long.

What is it all for? Are we feather-bedded into forgetting they are still children and can easily make the most simple and fatal mistakes?

What about the instinct of little Jack Johnson to run and try to help the other boys in trouble? The incredibly brave ten-year-old did not think of himself and paid the ultimate price for his selfless courage. How can any of us even begin to comprehend what his family feels?

Then who can fail to be thankful for the rescue workers who did all they could to save the children. Both police and firefighters who came to lay wreaths at the boys’ memorial were spontaneously applauded by members of the public. A witness said: ‘You could hear them cracking through the ice and I heard one saying, ‘We’ve got him, we’ve got him.’

No one would want that job.’ Indeed. You might shrug that they were only doing what they are paid for, but nothing must detract from that stalwart strength at a time of need.

Many have been seen laying tributes to the children with tears in their eyes. They, too, must be wishing time could be rewound — that they could have arrived sooner, done more.

Many people will be feeling that Sunday’s horror feels like the last straw as a deep chill has gripped the land. There are families depressed at the cost of filling a supermarket trolley or switching on the heating. There are those isolated by rail strikes as Christmas cards and presents pile up in Post Office depots, and those holding a genuine fear at what catastrophe the strikes of nurses and ambulance workers might yet cause.

Yes, life can seem tough and problems insurmountable, yet who really cares as long as we have our families around us?

As long as we can smile at a grandchild far away via Zoom? Or (for those without family) if we can be cheered by the knowledge that the local school will be singing carols down the road and church groups and charities will be distributing toys, gifts and food to the needy? That somewhere in the gloom, goodness, love and peace always thrives?

Those things are what truly matter. The real ‘tidings of comfort and joy’. And sometimes it takes a massive jolt to make you rethink your priorities.

To catch your breath and realise that whatever is bothering and inconveniencing you at the moment will pass — but the grief of those mourning their children will not.

Believe me, I know. During a very long career in journalism, writing frequently about bereavement, I have listened to so many stories about loss it has sometimes felt like drowning in tears of sadness.

There was the weeping mother in Sunderland whose baby (placed on the draining board in a rocker but not strapped in) toppled into the old top-loading washing machine and was fatally scalded.

Another mother, from South London, could never forget her toddler drowning in the bath when she popped to the loo. I interviewed a Booker Prize-winning writer whose only son, 11, was run over by a drunk-driver. And so on. . .

In 1995, I helped launch the combined Child Death Helpline at Great Ormond Street Hospital in London and Alder Hey in Liverpool, and could not even begin to recount all the tragic stories of loss I heard in both places.

In 1997, speaking at the Alder Centre’s annual Candle Service in Liverpool’s enormous Anglican cathedral, I read out the names, one by one, of hundreds of children whose bereaved parents packed that space. The cumulative sorrow was absolutely overwhelming.

And that is how it must be in Solihull today. The bereaved families must be allowed their privacy and yet we can still stretch out imaginary hands and hearts towards them.

All I can do now is end with the simple poem the late novelist Alice Thomas Ellis wrote for her 19-year-old son Joshua, who was just passing time with a friend, as teenagers do, when the surface of a roof he thought solid collapsed beneath him.

His mother wept in my arms and I know she would not mind if I change the singular to the plural, and offer her words here for those children, in memoriam: All their beauty, wit and grace Lie together in one place, They who sang and sprang and moved Now, in death, are only loved.

Anyone affected by the death of a child at any age can contact the Child Death Helpline, a freephone service, on 0800 282 986. A similar support service is offered by The Compassionate Friends on 0345 123 2304. Winston’s Wish offers specific support for children affected by a death in the family: 08088 020 021.