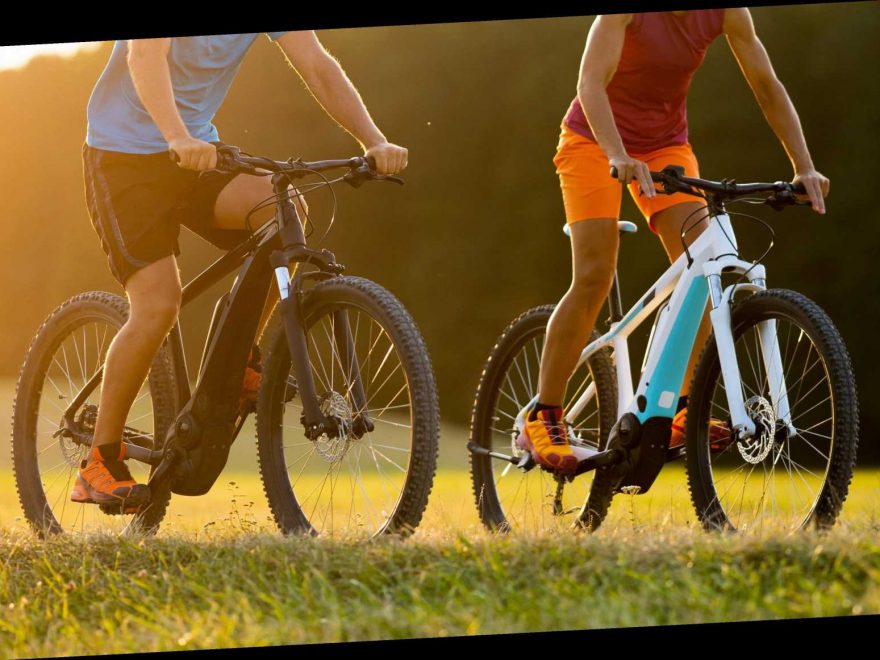 STRUGGLING to find the best electric bike for you? We’ve scoured the internet to source the best e-bikes on the market.

Electric bikes come in all shapes and sizes, with the only difference between an e-bike and a normal one being the inclusion of a battery and a small motor. 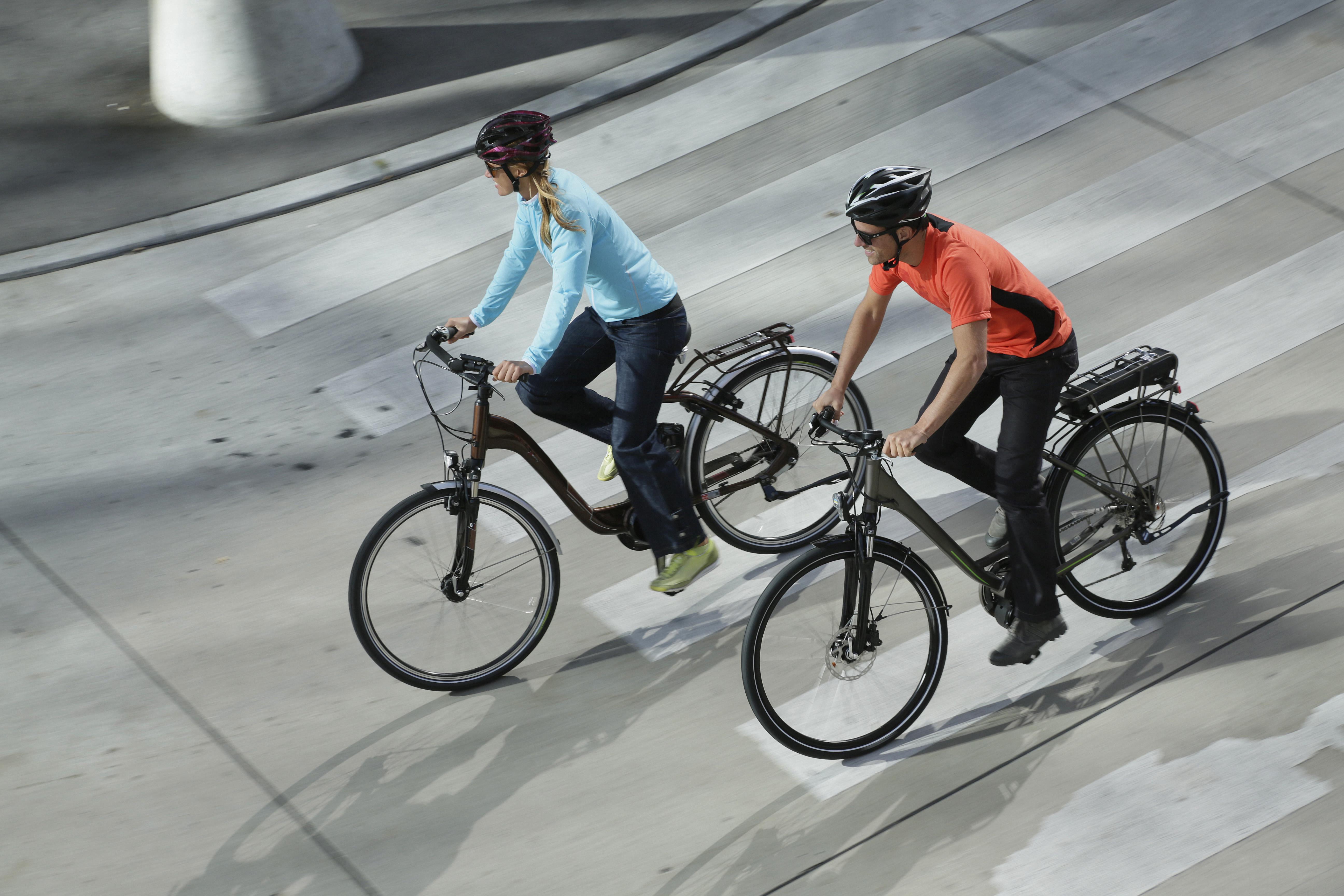 This motor features pedalling assistance and is generally found either in one of the wheels’ hubs or on the frame by the pedals themselves.

The addition of this technology often leads to electric bikes not only being heavier than a standard bike, but more expensive too.

How much do electric bikes cost?

Although the price is always dropping as the technology evolves and becomes cheaper to produce, most electric bikes are still a serious investment.

It is possible to pick up a cheap electric bike and be left with change from £1,000, but the range can go as high as ten times that.

Before you think about having to remortgage the house though, the majority sit around the £2-3,000 mark.

Although that might still sound like a lot of money compared to a cheap hybrid or road bike, the great thing about electric bikes is that they make cycling a lot more appealing to those who previously wouldn’t have considered buying a bike.

They take most of the hard work out of riding, leaving the user to enjoy taking in the sights as you whiz around on two wheels.

This makes them perfect for a wide array of people – from commuters who don’t want to get sweaty on their way to work, to pensioners looking for a good excuse to get out of the house.

So whether you’re after a cheap e-bike to get to and from the office, or want an electric mountain bike to get you to the top of the trails faster, our list should have the best electric bike for you. 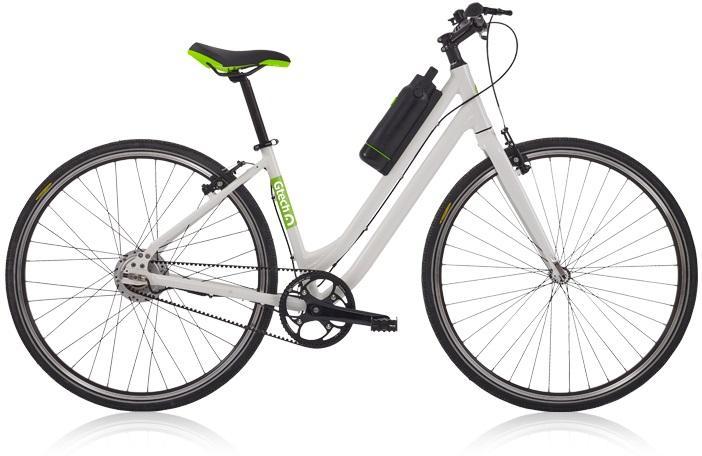 As mentioned above, the words cheap and electric bike don’t generally go hand-in-hand.

Although the technology is constantly advancing, and there are drops in pricing as a result, an e-bike will generally cost more than its non-electric equivalent.

Based on a step-through hybrid bike, the bike manages to pack an awful lot in for its £895 price tag.

It has a 36v high torque motor in the rear wheel that, when combined with its 200 watt battery, can propel you for a range of 30 miles, with a top assisted speed of 15mph.

The motor is powered by a Lithium-ion battery, which has been cleverly designed to look like a water bottle when attached to the frame.

If you do run out of juice, the bike’s lightweight aluminium frame makes it rideable even without assistance.

Alternatively, plug it in and wait the three hours for the battery to be fully charged again. 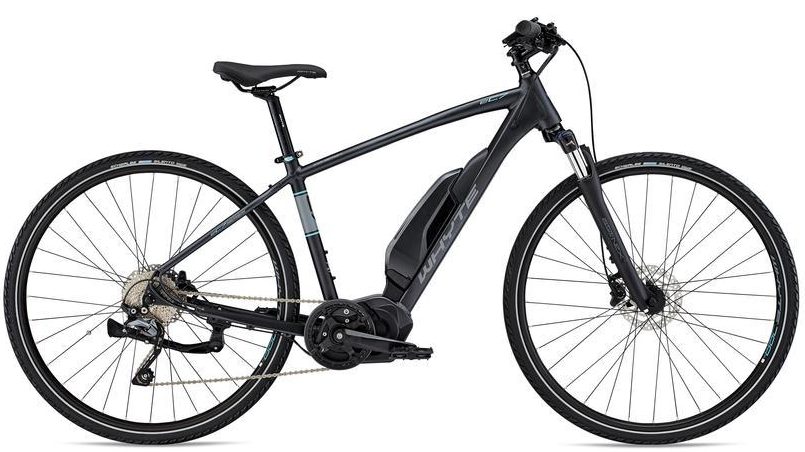 Electrifying your hybrid bike will make your morning commute that bit easier or give you some power assistance when pootling along canal paths.

The Coniston does just that, supercharging your ride for up to 93 miles when used in Eco mode (or 46 miles if you select High).

Unlike the Gtech offering, the motor sits within the crank system, while the battery is located on the frame of the bike – providing better weight distribution.

A kickstand and weatherproof features such as optional custom designed mud guards are nice finishing touches, while the inclusion of front suspension is a bonus if tackling rougher terrain. 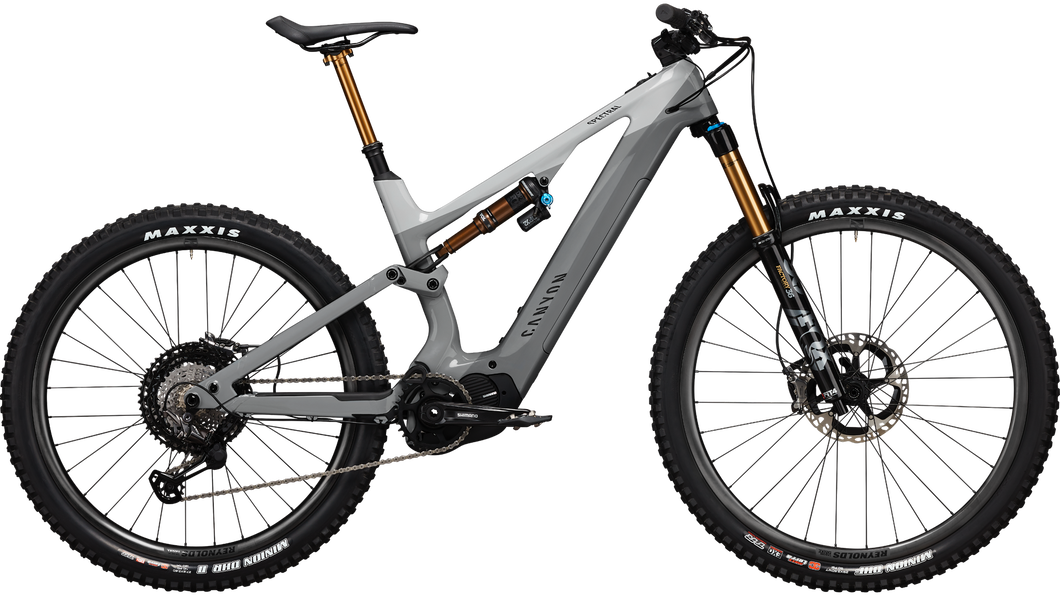 The world of mountain biking has been revolutionised by the introduction of e-bikes.

Where previously you’d have to ride (or push) your bike up to the start of a downhill trail, the electric motor takes all of that effort out of it, giving you more time to ride.

German direct-to-consumer manufacturer Canyon has a couple of e-MTBs in its armoury, but it’s the Spectral:On CF 9.0 that will turn heads.

Not only do you get an amazing bike (including a light and nimble carbon fibre frame and top-of-the-range componentry from the likes of Fox, Shimano and Reynolds throughout), but it’s all been designed with an electric motor in mind, which really takes things up a notch. 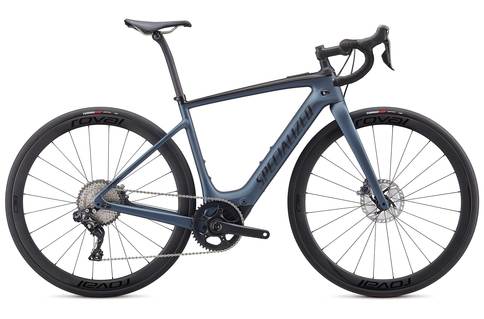 Like with disc brakes, road bike manufacturers have been a bit slow to adopt technology that has been embraced by the mountain bike world – but it’s fair to say that there’s nothing slow about the e-road bikes coming out of the Specialized stable.

The American brand’s Turbo Creo SL Expert is arguably the best of the bunch, resembling a bike that wouldn’t look out of place in the professional peloton, but with some added oomph for a whopping 80 miles (or 120 miles if using the optional bottle cage-mounted battery extender).

The battery and motor are concealed within the bike’s super light carbon fibre frame, and provide upto 240 watts of support to seamlessly assist you up tough hills or to ride for longer.

The company’s Futureshock 2.0 fork will dampen chatter from some of the UK’s rougher country lanes, while disc brakes and Shimano’s well-respected Ultegra Di2 componentry complete what is probably one of the fastest bikes on the road. 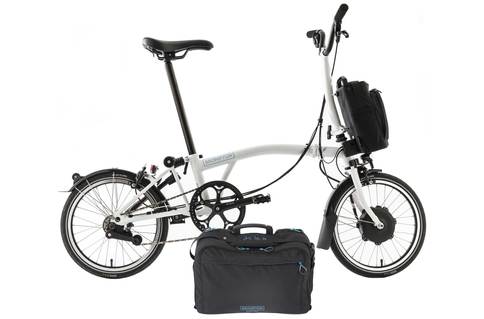 It is even possible to get an electric folding bike, with a number of manufacturers looking to combine the practicality of a fold-up with the added power of an e-bike.

British brand Brompton is a pioneer in the field, and has managed to electrify its popular M6L model.

The bike’s motor is encased in the front wheel’s hub, while the battery is strategically stored in a normal-looking bag (which even has space for your laptop and lunch box) above the front wheel.

The bike can be used in four different modes (from no assistance to a high level), and can be folded up ready for public transport just as quickly as its non-electric sibling. 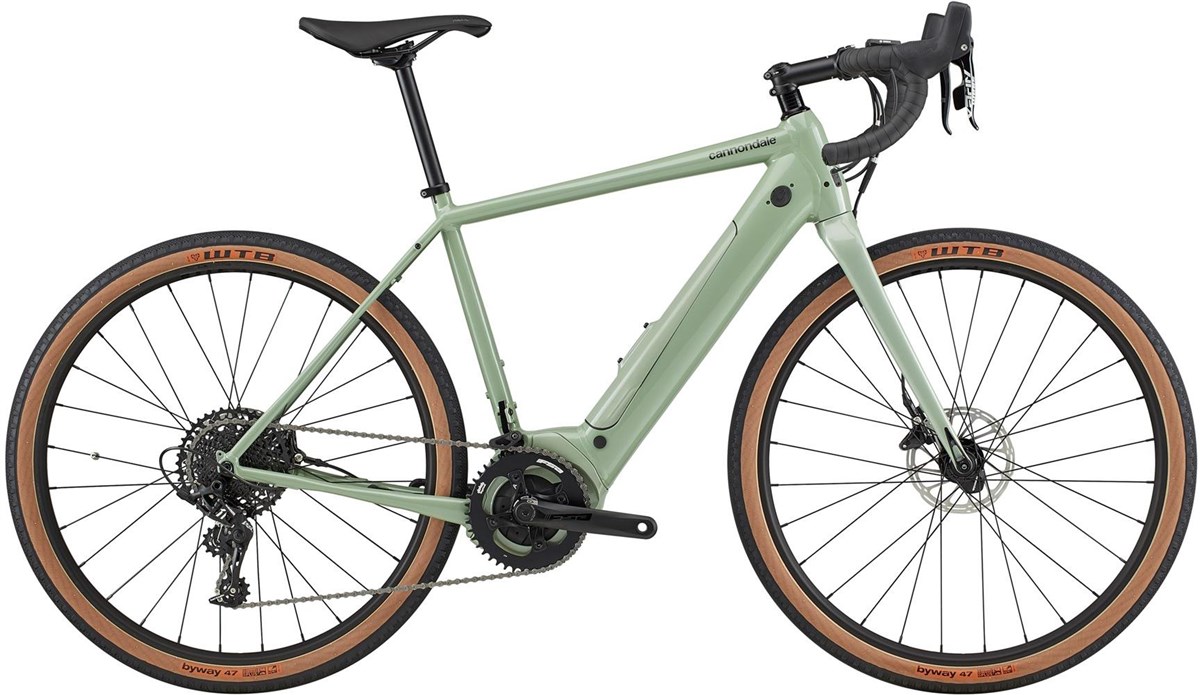 Adventure, allroad, gravel – whatever you want to call it, it's one of the fastest-growing areas of the cycling market. And it's easy to see why.

In its simplest form, a gravel bike is essentially a road bike that can handle riding rougher stuff thanks to big, chunky tyres. They are great on the tarmac because they can glide over the UK's pothole-strewn country lanes, but come into their own when exploring gravel paths, bridleways and some easier mountain bike trails too.

While Cannondale has a number of off-road-leaning bike ranges (such as its Topstone, CAADX and SuperX lines), its the Synapse NEO SE where things get really interesting.

The design uses the brand's Synapse endurance platform as a base and turns it into a true gravel grinder through the installation of slightly smaller 650B wheels and 47mm-wide WTB Byway tyres that are ideal whatever the terrain. And that's before we get to the battery.

Located in the frame's downtube sits a 500Wh Bosch Active Line Plus drive system that can provide you with drag-free support for up to 150km. Throw in a wide-range, 11-speed SRAM Apex drivetrain and you've got yourself a bike that will be able to keep going, even when you can't.

What is the best electric bike on the market?

Since electric bikes come in a number of different varieties, working out which one is the best is tricky.

The options on the list above should give you an idea of the best e-bikes in each category.

The range of an electric bike battery can vary a great deal depending on a number of factors.

The size of the battery is important; obviously a battery with a larger capacity can hold more charge and has a greater range than a smaller one.

As things stand, the top e-bikes will get you up to 100 miles of assisted riding in ideal conditions.

How fast can ebikes go in the UK?

Under UK law, ebikes are restricted to 15.5mph and 250 watts of power.

Once this speed or power output is reached, assistance will cut out and an electric bike functions like a normal one, albeit with the additional weight of a battery and motor.

Do you need to pedal an ebike?

Unfortunately for some, an ebike does still require some level of input from the rider.

Unlike a moped or motorbike, where power is controlled with the twist of a throttle on the handlebars, electrically assisted bicycles will only propel themselves forward when pedalled.

The amount of pedalling you have to do is dependent on the power of the motor and the level of assistance you’ve got your ebike set up with though.

Enjoyed our roundup of the best electric bikes? Why not check out our best hybrid bikes, best cheap mountain bikes and best cheap hybrid bikes articles? We've created Sun Selects so you could find everything you're looking for when shopping around the web.

Are you looking for the latest sports gear? Check out our health and fitness section here.

If you are buying a bike and currently looking at the bike brands, take a look at our round-up of the best cycling helmets.