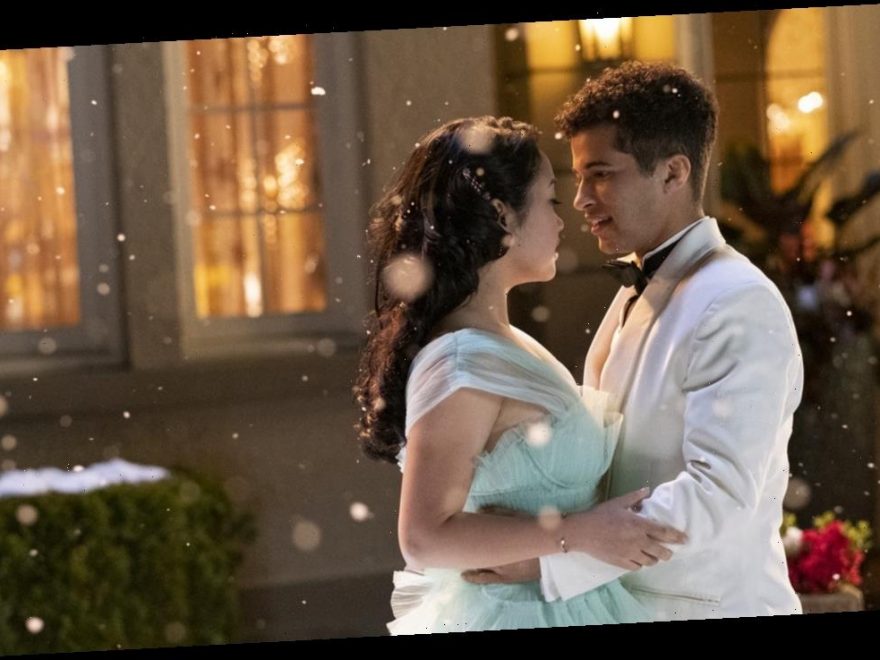 Move over Peter Kavinsky — John Ambrose McClaren is ready to provide a little competition for Lara Jean’s heart. In a new interview with Entertainment Weekly ahead of the movie’s Feb. 12 release, Jordan Fisher said John Ambrose in To All The Boys 2 is a "daddy." Yes, John Ambrose of Model U.N. is daddy.

The film picks up after the events of To All the Boys I Loved Before, with Lara Jean (Lana Condor) and Peter (Noah Centineo) becoming a real couple, when her middle school crush reappears and causes some drama. Apparently, the last time she saw John, he was an adorable nerd with a stutter, but now, he’s all grown up and ready to win her heart. "I jokingly, not jokingly say that John Ambrose is daddy," Fisher — who plays Lara Jean’s new love interest — told the magazine. "He moves away, loses the stutter, gets a little wiser and a little cooler and comes back as, like, that guy in the corner at a speakeasy with a leather-bound book and horn-rimmed glasses sipping a cocktail," he joked.

The actor and musician was determined to make sure that his John Ambrose was a dreamboat, so that he could compete properly with the Internet’s boyfriend, Peter Kavinsky. "This guy’s got to compete with not just Peter Kavinsky but Noah Centineo’s Peter Kavinsky," Fisher said, describing the character as "every girl’s dream guy."

But it’s not just John Ambrose’s new, confident personality that is causing Lara Jean to question her relationship with Peter. "John Ambrose is Lara Jean’s first love," Fisher told Entertainment Tonight in January. "He was her first ‘Oh my god, I’ve got these feelings and I don’t know what to do with them, let me write them out in a letter.’ … It throws her for a loop, because she’s just begun relationship with Peter."

"They’re true friends," Condor told EW back in December about the relationship between Lara Jean and John. "But because you can love your friend very much, you get confused. You’re like, ‘Do I love him or do I love him as a friend?’ So he’s really there to mix it up." While Lara Jean might be conflicted about the new love triangle at the center of To All the Boys 2, the actor behind Peter Kavinsky isn’t too worried about John Ambrose stealing the spotlight.

"People are calling it a love triangle, and I don’t think that’s the most accurate way to describe it," Centineo said during an appearance on The Tonight Show Starring Jimmy Fallon in January. "But what happens is … someone from [Lara Jean’s] past shows up and she begins to question things" about their relationship. Sure, it’s hard to imagine anyone competing with Centineo’s Peter Kavinksy, but with a "daddy" like John Ambrose in the picture, it’s hard to blame Lara Jean for following her heart, wherever it leads her.