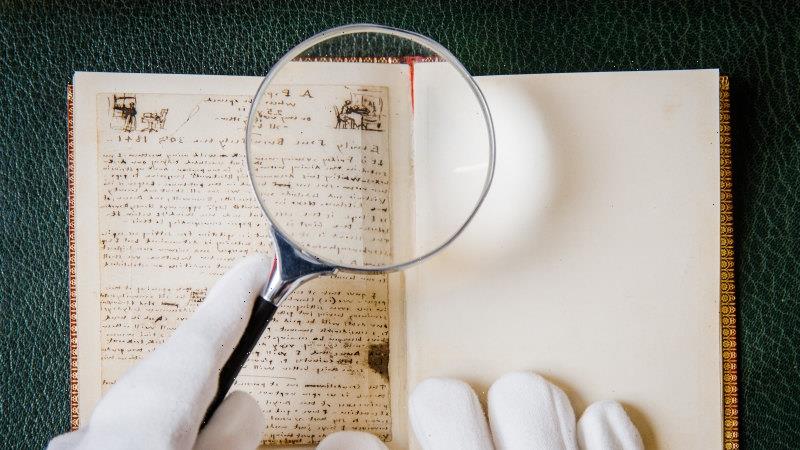 Bronte artefacts have a way of making dramatic reappearances.

In 2011, a miniature book created by 14-year-old Charlotte Bronte prompted a bidding war that climbed past $1 million. In 2016, the Bronte Parsonage Museum announced that it tracked down a book filled with doodles and inscriptions by the Bronte children (including an unknown poem by Charlotte) that had once survived a shipwreck.

And now, a trove of Bronte family manuscripts — all but unseen for a century — will be auctioned by Sotheby’s as part of what the auction house is billing as the sale of a legendary “lost library” of British literature treasures.

The Honresfield Library, a private collection assembled by two Victorian industrialists that vanished from public view in the 1930s, contains more than 500 manuscripts, letters, rare first editions and other artefacts from a number of canonical authors, including the manuscripts of Walter Scott’s Rob Roy and Robert Burns’ First Commonplace Book. 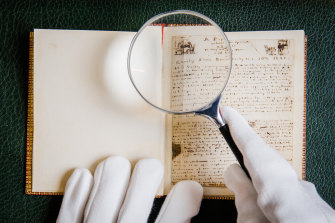 An 1841 birthday note from Emily Brontë to her sister Anne, part of a collection of manuscripts to be sold at Sotheby’s in July.Credit:New York Times

But it is the Bronte material — based on hoopla surrounding past Bronte auctions, and the estimates for this one — that is likely to cause the biggest stir. Highlights, which will be exhibited at Sotheby’s in New York from June 5-9, include a handwritten manuscript of Emily Bronte’s poems, with pencil edits by Charlotte. It carries an estimate of $1.3 million to $1.8 million.

The trove also includes family letters, inscribed first editions and other relics that offer a glimpse into life in the Bronte household, like the family’s heavily annotated copy of Bewick’s History of British Birds (which features in the opening scenes of Jane Eyre).

Gabriel Heaton, Sotheby’s specialist in English literature and historical manuscripts, called the Honresfield Library the finest he had seen in 20 years, and the Bronte cache the most important to come to light in a generation.

“The lives of these sisters is just extraordinary,” he said during a video interview, before offering a first peek at the materials. Looking at the manuscripts “takes you right back to the incredible moment where you had these siblings scribbling away in the parsonage.”

Claire Harman, the author of Charlotte Bronte: A Fiery Heart, said she had been “hyperventilating” since she got wind of the auction, which will be held online in July, after additional previews in London and Edinburgh, Scotland.

“It’s just absolutely gobsmacking,” she said. “Scholars and readers have known these things exist, but you forget when they are in private hands. It’s like Sleeping Beauty — there but not there.”

The Honresfield Library took shape not far from the parsonage at the edge of the West Yorkshire moors, where Charlotte, Emily, Anne and their brother, Branwell (born between 1816 and 1820), grew up creating elaborate shared imaginary worlds. It was assembled starting in the 1890s by Alfred and William Law, two self-made mill owners who had grown up less than 20 miles from the Bronte home in Haworth (which is now the Bronte Parsonage Museum).

The Laws’ collection, held in the library at their home, Honresfield House, included what Heaton called “grand country-house books” like a Shakespeare First Folio (long since sold off). But the brothers, less typically, were also keen collectors of manuscripts, acquiring the Bronte cache from a dealer who had bought them directly from Charlotte’s widower. William, the more serious collector, also paid frequent visits to Haworth to buy family relics that had been saved by neighbours and relatives.

After the deaths of the brothers (who never married), the collection passed to a nephew, who granted access to select scholars, and had facsimiles made of some items. But after his death in 1939, the originals fell out of public view. 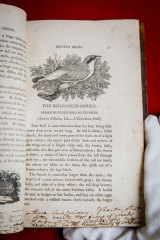 The Brontë family copy of Thomas Bewick’s A History of British Birds, which has a cameo in Jane Eyre. Credit:New York Times

By the 1940s, the collection had become “well-nigh untraceable,” as one scholar put it at the time. In recent decades, some artefacts from the collection, like Charlotte’s writing desk (now at the Bronte Parsonage Museum), have come up for auction. But the whereabouts of the rest remained unclear.

“When I was first approached about this material, I thought, ‘Hang on — maybe it’s that collection?’” Heaton recalled. “To then go actually see it was quite a thrill.” (The sellers, who wish to remain anonymous, are family descendants of the Laws, he said.)

The news that the newly surfaced collection would be dispersed at auction has not thrilled everyone. On Tuesday, the Bronte Parsonage Museum issued a statement calling for the Bronte material to be “preserved intact for the nation,” and lamenting “the narrow commercialisation and privatisation of heritage”.

Material from Emily Bronte’s hand is particularly rare. There is no manuscript for Wuthering Heights, which was published in 1847, the year before her death from tuberculosis. Only two letters by her are known to survive, Heaton said.

The material to be sold at Sotheby’s includes some of the “diary notes” Emily and Anne wrote for each other on their birthdays. (One from Emily, in 1841, instructs that Anne should read it later, when she turns 25.) There are also letters from 1840 by the least known Bronte, Branwell, including one to Hartley Coleridge, the son of Samuel Taylor Coleridge, which contain copies of his verses and describe his (never-fulfilled) literary ambition.

But the marquee item is the manuscript of 31 poems in Emily’s hand, dated February 1844. It not only preserves her verse as she wrote it, Harman said, but played a crucial role in spurring the literary careers of all three sisters.

Emily had written her poems in secret, with no intention for publication. But in 1845, the story goes, Charlotte stumbled upon them by chance, and found them extraordinary. (“Never was better stuff penned,” reads a penciled notation, possibly by Charlotte, at the bottom of the manuscript.) Emily, while initially angry, agreed to include them in a self-funded volume of poetry by the three sisters, who used the pseudonyms Currer, Ellis and Acton Bell.

That volume, published in 1846, sold just two copies. But it prompted the sisters to begin work on their novels, which became a sensation, setting off intense speculation about the true authors behind the pseudonyms — and the broader Bronte-mania that continues today.

“If this manuscript is the one Charlotte looked at surreptitiously, it was a witness to that very tense scene between the sisters as well as a literary relic,” Harman said. The Bronte literary story “only happened because of getting the show on the road with those poems.” 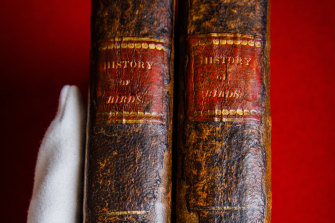 The collection at Sotheby’s includes other items that provide glimpses into everyday life at the parsonage. During the video interview, Heaton flipped through the family copy of Bewick’s “History of British Birds,” which is full of annotations by Patrick Bronte, the siblings’ father.

In early scenes of Jane Eyre, Jane leafs through the book, seeking imaginative refuge from her grim circumstances. In real life, the siblings used it as a model for drawing practice, while Patrick filled it with practical notes on which species make good eating. (The scoter, a kind of duck, apparently tastes like “a mixture of beef and red herring.“)

There are also first editions of Anne’s novel Agnes Grey and of Emily’s Wuthering Heights. Today, Sotheby’s estimate for the pair is $280,000 to $425,000. At the time, the sisters had been angered by the publisher’s typo-ridden job.

Heaton pointed out another defect in the copy of Wuthering Heights: Some gatherings of pages are bound out of order.

“It plays into the story we know about the novel’s publication,” he said. “It’s just beautiful evidence.”

This article originally appeared in The New York Times.