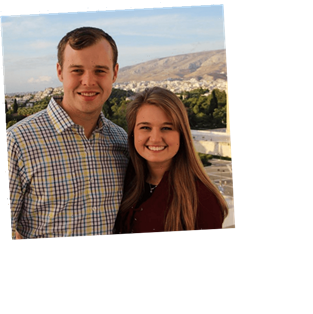 Joe and Kendra Duggar, who star on the reality show Counting On, recently announced that Kendra is pregnant with baby no. 3. The couple shares two kids, Garrett and Addison, and while some are thrilled to learn they’re pregnant once more, others are becoming gravely concerned for Kendra’s well-being. When Joe and Kendra began courting, Kendra was only 18, which is generally the minimum age that the Duggars — and families who live similarly — can start a courtship. The two didn’t waste any time getting to know each other, as the Duggars and the Caldwells (Kendra’s family) had been friends for years. After a two-month courtship, Joe proposed.

The couple tied the knot in September 2018, and Kendra became pregnant right away. Within three months of the wedding, the two had announced a pregnancy, and Kendra welcomed her first child, Garrett, when she was 19.

Thank you for all the birthday wishes! I had a wonderful birthday celebrating with the best😍 • • •#turning22 #birthdaycelebration #lovespendingtimewithhim 👗@citrusandlemon

Baby no. 3 comes less than a year after announcing their second child

Kendra and Joe were quick to expand their family after welcoming their first child. By the time Kendra was 20, the two were announcing another pregnancy, and they welcomed their daughter, Addison, when Kendra was 21 and Joe was 24.

From there, it didn’t take long for fans to start suspecting Kendra could be pregnant again. Prior to her second pregnancy announcement, she took a hiatus from social media. And this summer, fans noticed Kendra was nowhere to be found on her family’s social media account. Fans were proven right when Joe and Kendra announced on Aug. 19 that baby no. 3 is arriving in February 2021 — the announcement was made less than a year after the two welcomed their daughter.

We are so excited to announce that we have a tie-breaker coming in February. Baby #3 is on the way! We are so excited to see Garrett and Addison’s reaction when they meet the new baby. Garrett has already been such a loving big brother to Addison and we look forward to Addison’s reaction to a life size baby doll. Life is full of surprises and we’re thrilled that it is a sweet baby that surprises us this time! @erikakirbyphotography

It’s not uncommon for Duggar families to have many kids; Michelle and Jim Bob Duggar have 19 biological children and one adopted child. Now, some viewers have been growing increasingly concerned about Kendra’s well-being with so many kids at such a young age; she became pregnant with her third baby at 21.

“Kendra needs to slow down,” one Reddit post read. “Jesus give her body time to heal,” someone else wrote. “I would not be surprised if she makes it to 25 children,” another person added. “If this wasn’t so tragic, it would be entertaining. Poor, simple girl is going to be 22 with 3 kids,” one user added.

Other fans were thrilled by the couple’s baby news

Though some of the show’s viewers were worried for Kendra’s health, other fans were excited to learn she’s expecting. Joe and Kendra’s Instagram announcement was filled with loving comments from fans. “Congrats to you both! What a blessing,” one fan wrote. “Babies make nothing but new blessings,” someone else said. “Such a cute way to announce,” another fan added. Some think Joe and Kendra will have more kids than Michelle and Jim Bob, though they are technically still pacing slightly behind.