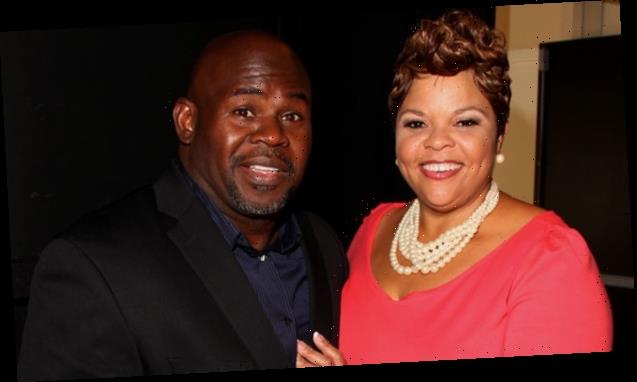 Tamela Mann has lost an impressive 50 pounds and her husband David Mann says her transformation will be very noticeable on their new BET show ‘Tyler Perry’s Assisted Living.’

David Mann, 54, promises fans can expect to see a ‘different’ Cora when they tune into Tyler Perry’s Assisted Living, thanks to Tamela Mann‘s recent weight loss journey. The stars of Meet The Browns and House Of Payne reprise their beloved characters, Cora and Mr. Brown, on the latest family friendly comedy from Tyler Perry. But, now that Tamela, 54, has dropped 50 pounds on the WW [Weight Watchers] program, her hourglass curves will be stealing scenes.

David confessed to HollywoodLife, in an EXCLUSIVE interview, that his wife’s stunning transformation has made it tough to stay in character, since they play father and daughter on the show. “When you watch Assisted Living, you’ll see Cora looks different now. Mr. Brown almost forgot that Cora was his daughter! I was like Cora you look good!

“I had to go back and think, wait a minute, I’m not supposed to [think that way], I’m not her husband right now. There were a couple of incidences when we were shooting Assisted Living when I would just reach in and cop me a little feel and she’d have to remind me.”

Luckily Tamela had no problem keeping him in line. “When I put that Cora wig on I do not think of him as David, to me he is Mr. Brown. So I would have to remind him, you are my daddy right now, you are not my husband,” she teased.

Tamela, who is a brand ambassador for WW, has lost over 50 pounds in the past year. “My words for this year are focus and finish because I really want to complete this task. [My weight] has been a thorn in my side forever and I’m just like Lord I really want to overcome this.

“Just to be healthier and not to be a liability on my family, that’s the reason I became partners with WW. But I want to do it for myself too, I want to look good for myself. I really want to be a size 14 so I can go into any store and pick up something to wear.”

Tamela’s fitness journey has inspired plenty of people — including Oprah Winfrey! Earlier this year Tamela took the stage at the WW Presents: Oprah’s 2020 Vision: Your Life in Focus tour to sing one of her original songs and share her weightless journey, and she ended up exchanging numbers with the queen of all media backstage.

“She was supposed to give Oprah Winfrey a call,” David revealed. “But who gets Oprah‘s number and doesn’t give her a call — Tamela Mann.”

For the record, it was humility that kept Tamela from picking up the phone. “I was just thinking she may be busy, you know,” she explained.

Fortunately Oprah wasn’t too busy. “She’s walking one day and all the sudden she gets a call from an unknown number and it is Oprah Winfrey,” David continued.

Naturally, Tamela was beside herself with excitement. “I didn’t know whether to say Miss Winfrey, hey Oprah, hey girl. It was an incredible experience. She was just congratulating me and we were talking about my weight loss and everything. And she was like, ‘you inspired me, I was going to get a bowl of cereal and now I decided to get a banana.’  And that’s what I really love about WW it’s very encouraging. It’s a platform where everybody is uplifting each other.”

I’m back home and I’m getting back into my groove! I’m still focused and I WILL finish❤️ #wwambassador #wellnessthatworks @ww

Tamela and David were equally effusive when talking about their two decades of working with Tyler Perry. “It’s been a wonderful ride we started working together in 1999 and to see him grow from 1999 to 2020 is just incredible,” gushed Tamela. “To see him develop as an artist, as a director, as a business mogul.”

You can catch Tyler Perry’s Assisted Living on Wednesday nights at 10 p.m. ET/PT  on BET. And check out Tamela’s latest single “Touch From You” on all digital platforms.