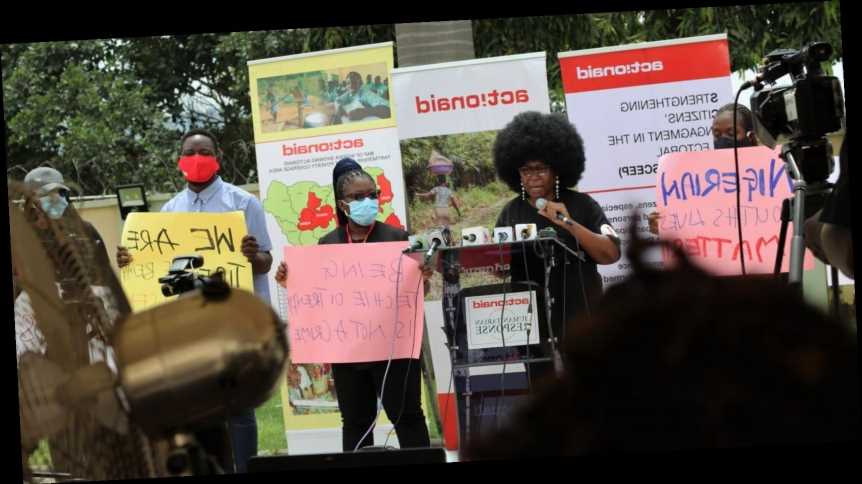 While calls to #ENDSARS and police brutality in Nigeria continue, Ene Obi, ActionAid Nigeria’s Country Director gives us a frontline eye-witness account of what’s happening on the ground.

Many believe the #EndSARS movement against police brutality in Nigeria, which began on 8 October, is destined to change the country forever. What began as peaceful youth-led street protests and social media activism targeting the country’s police Special Anti-Robbery Squad (SARS), known for its human rights abuses, has become a wider-reaching movement calling for police reform and an end of governance of the country by elites.

Since the protests began, after a video allegedly showing a SARS operative killing a man went viral, the situation on the ground has turned into “some of the worst street violence the country has seen since the end of military rule in 1999,” Reuters reports.

On 20 October, police and soldiers killed at least 12 people in two Lagos neighbourhoods, Alausa and Lekki Toll Gate, according to witnesses and the human rights group Amnesty International. The exact number of people who have died in the unrest isn’t clear – last Friday, President Muhammadu Buhari said 51 civilians had been killed, along with 11 police officers and seven soldiers. Two days prior, Amnesty International said the death toll was at least 56, with about 38 killed on 20 October alone.

The atmosphere intensified over the following days, with crowds setting fire to police stations and government offices, looting at shopping malls and government food warehouses (including of Covid-19 aid in the capital, Abuja) taking place, and curfews imposed on millions. The protesters who rallied against police brutality are largely not those doing the looting and vandalism, according to both protesters and government officials, and protest groups have condemned the violence and looting.

SARS was disbanded on 11 October, but protesters and activists have turned their attention to the new unit, Special Weapons and Tactics (SWAT), set up to replace SARS. SARS had previously been disbanded multiple times, only to return, and protesters consider the latest change as just a new name. Many young Nigerians consider the movement “a fight for the next generation”.

Stylist spoke to Ene Obi, 58, an activist and the Country Director of ActionAid Nigeria, who was born in Otukpo in the country’s Benue State, about what should happen next. Ene was among those who struggled for democracy in her youth – she was imprisoned, detained and kidnapped by the then military. She has since worked with the labour movement, led a feminist movement and worked across the federal structure in Nigeria. Since 2018, in her role at ActionAid, Ene has worked with local women leaders to challenge power relations, increase the number of women participating in decision-making processes and spaces, and to end violence against women and girls.

Ene’s daughter was brutally assaulted during the height of the protests in Abuja and was taken to hospital as a result. Here’s what she told us…

“At the beginning, the protests were largely peaceful, despite anger and frustration over police brutality. Some even had DJs and music. In some locations like at Government House, Alausa and Lagos, protesters camped outside overnight.

As darkness fell last Tuesday, Nigerian flags were handed out to the thousands of people gathered at the Lekki Toll Bridge with instructions to sit down while they sang the national anthem. People were waving their flags and hoping there would be no danger if they remained peaceful.

Sadly, the atmosphere changed rapidly when the Nigerian Military arrived and shot directly at them. Many people fled in panic whilst others were stuck – they were barricaded and boxed in by soldiers.”

Violence against protesters has been widely reported and many have died. Have you seen this first hand?

“Sadly, my daughter and her friends were brutally beaten by the police at the #EndSARS protest on 11 October – she’s okay now but of course it was extremely worrying. Many people have posted videos on social media to show what’s happening. Videos from Lekki Toll Bridge show the Nigerian Army shooting and live ammunition being picked up from the ground.

DJ Switch, a Nigerian celebrity, broadcasted an Instagram live from Lekki which over 2000 people watched – a doctor could be seen sanitising medical equipment with a lighter and removing a bullet from a young man’s leg. “

What are protesters calling for now?

“They have always been very clear with their demands – aside from the disbandment of the Special Anti-Robbery Squad (SARS), they are referring to their demands as “#5for5”:

1. The immediate release of protesters arrested across Nigeria

2. Justice and compensation for families of victims and survivors (the request for justice includes victims that were affected before the protests)

3. An independent body to oversee prosecution of officers within 10 days

4. In line with the new Police Act, psychological evaluation and retraining of disbanded officers before redeployment (by an independent body)

5. An increase of police salaries so that they’re paid adequately for protecting citizens

Although SARS has now been disbanded, a new unit was immediately created called the Special Weapon And Tactics Team (SWAT). Unfortunately, it was created with no clear strategy of how it will be operating.”

What role has social media played?

“Social media has been very useful for people organising protests and for sharing information about what’s happening on the ground. These videos are now serving as evidence for killings across the country and as a source for identifying people who are hijacking peaceful protests.”

What is ActionAid doing in Nigeria?

“We’re involved through mobilisation and making calls on the government. We’ve lent our voice through our social media platforms, press conferences and our Activista network – a movement of young people across Nigeria who campaign for social change and social justice.

We share our deepest condolences with all those who have lost loved ones and condemn any attacks against unarmed, peaceful protesters. Young Nigerians have continued to call for good governance and make their voices heard in a peaceful way despite violence, killings and hijacking, as well as silence from the federal government, which should be applauded.

Like many other Nigerians, we watched President Muhammadu Buhari’s long-awaited speech on Thursday but he failed to mention the shooting at the Lekki Toll Bridge, which is now known as #BlackTuesday. The incident that transpired at Lekki must be investigated and those who ordered the shooting, as well as the officers who fired at peaceful protestors, must be brought to justice. The President must also commit to justice for all the victims injured and all the families who have lost loved ones as a result of the #EndPoliceBrutality protests.

We are committed to supporting young Nigerians to take up the space they need to call for governance which is accountable, transparent, responsive, effective and inclusive – and follows the rule of law. The government must now provide a definite timeline for when it’s going to respond to protesters’ demands and ensure that these responses are clear cut.

We’re also looking to offer counselling, as feedback from the young people we work with and those following us online shows many are distressed and shocked by what they have seen,particularly the shooting at the Lekki Toll Bridge.”

Have you seen much that gives you hope?

“Yes. We believe the protests are the start of something new; a rebirth. Now more than ever, young people are engaged with how their country is run and are aware of the rights and power they have. That makes me feel very hopeful for our great country. Nigerians are now coming out to clean the streets and to support small businesses that were looted.”

Finally, if the people in Nigeria could get one message out, what would it be?

“They want their voices calling for accountability from their leaders to be amplified.”