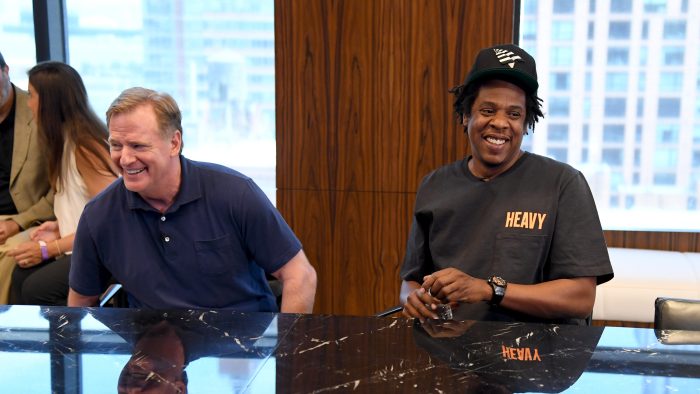 When news of the presumably lucrative entertainment and social-justice deal between Jay-Z’s Roc Nation and the NFL leaked on Tuesday, initially there was a surprising lack of public reaction or outcry.

But after a press conference where Jay and NFL commissioner Roger Goodell officially announced the deal at Roc Nation’s New York offices yesterday — during which the two were repeatedly asked by reporters about their stance on former San Francisco 49ers quarterback Colin Kaepernick, who has essentially been drummed out of the league for kneeling during the National Anthem as a statement of protest — the gloves seem to have come off.

Jay’s stated stance on the deal was essentially to say, “I’m interested in action: We know what Kaepernick’s protest was about, so now, what are we going to do about it?,” with the social-justice programs being an effort at a response. He answered Variety’s question about whether he considers the deal to be an act of protest itself — an opportunity to create change from the inside — with an emphatic “Of course!” He also said the larger issue was not about whether or not “Colin’s got a job,” but the larger racial and social issues that are the cause of his protest, and said he had spoken with Kaepernick, although he declined to reveal what they spoke about.

However, many people close to the situation were not having it.

While Kaepernick himself did not comment directly on the deal, a couple of hours later, he tweeted what may be a veiled reference to it: “Today marks the three year anniversary of the first time I protested systemic oppression. I continue to work and stand with the people in our fight for liberation, despite those who are trying to erase the movement! The movement has always lived with the people!” He also retweeted statements of support from filmmaker Ava DuVernay and rapper J. Cole.

Eric Reid, Kaepernick’s friend and former teammate, who kneeled alongside him during the 2016 season, tweeted a quote from the press conference in which Jay said, “… everybody knows I agree with what you’re saying [in Kaepernick’s underlying message]. So what are we gonna do? … [Help] millions and millions of people, or we get stuck on Colin not having a job,” responding: “These aren’t mutually exclusive. They can both happen at the same time! It looks like your goal was to make millions and millions of dollars by assisting the NFL in burying Colin’s career.”

Kaepernick’s girlfriend, Nessa Diab, who is frequently seen as an unofficial view into the quarterback’s thinking, slammed Jay for the deal in an interview on New York’s Hot 97 radio station and via Twitter. She retweeted a Variety article from earlier this week in which Jay claimed not to have spoken with Kaepernick — even though he said in the press conference, two days later, that they had — stating “This is a lie. COLIN never spoke to Jay-Z and NFL ahead of that deal being done.” (Reps for Jay maintained that the two spoke earlier this week, although his carefully worded comment — “We spoke” — does not indicate when they talked or whether it was about the deal.) She said on Hot 97, “I don’t mind you doing a business deal – but I do mind you wrapping it in social justice when you’re working with an organization that denies someone an opportunity.”

(Elsewhere, right-wing mouthpiece Tomi Lahren slammed the NFL for partnering with Jay, “a former drug dealer,” but whatever.)

Yet the strongest words may have come from The Atlantic’s Jemele Hill, who wrote in a long article titled “Jay-Z Helped the NFL Banish Colin Kaepernick”: “I get that Jay-Z might see this as an opportunity for artists to connect with the NFL’s immense audience. He could also offer some incredible insight and direction to the league on the social-justice front, since he’s been actively engaged in such work for a long time. I also understand that, to become hip-hop’s first billionaire, Jay-Z didn’t always have the luxury of avoiding relationships and partnerships with people he disagreed with or disliked.

“But in this case, Jay-Z isn’t getting enough out of the deal to justify the sacrifice of some of his credibility,” she continued. “This alliance plays right into the NFL’s hands, because the league seems determined to banish any memory of Kaepernick with its recent social-justice efforts—even though it’s likely that Jay-Z and the NFL wouldn’t even be entering into this arrangement if Kaepernick hadn’t taken a knee in 2016. …

“By leaving Kaepernick completely out of the mix, Jay-Z is now complicit in helping the NFL execute its strategy. Now he is an accomplice in the league’s hypocrisy.”

Jay-Z spoke firmly, if at times evasively, about the deal during the press conference, and his rep did not immediately respond to Variety‘s request for comment on many of the reactions above. But the vaguely defined social-justice efforts that both he and the NFL say are at the center of the deal will have to be significant in order to quell the negative reactions around this surprising partnership.